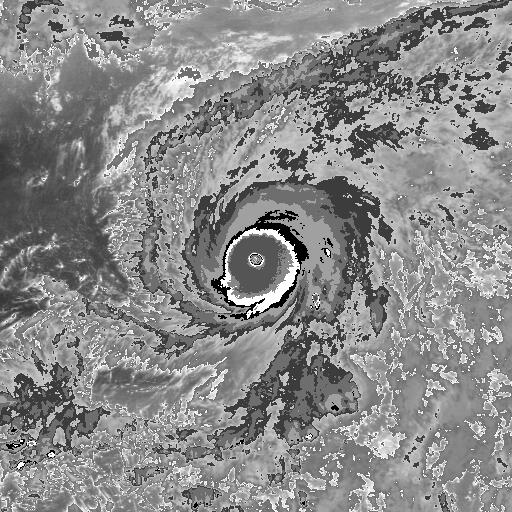 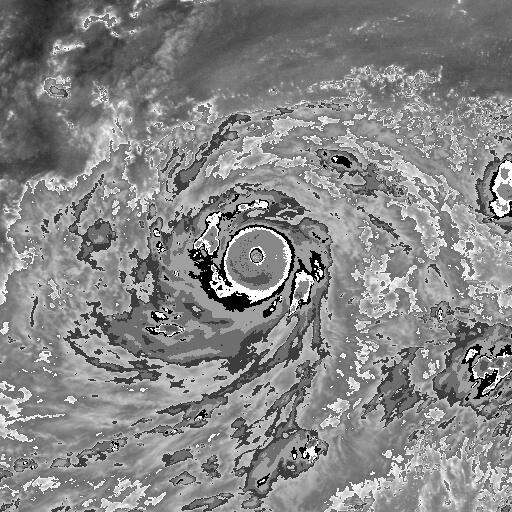 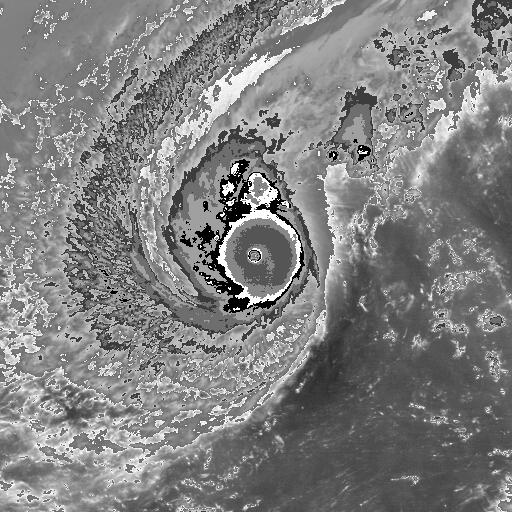 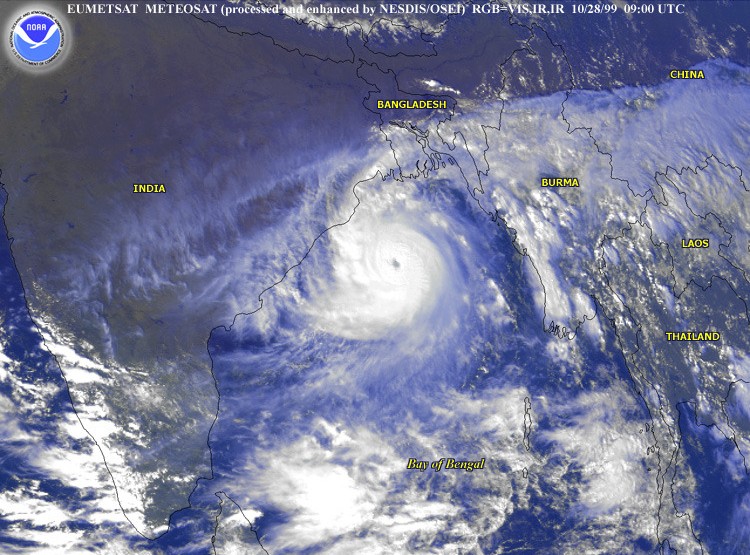 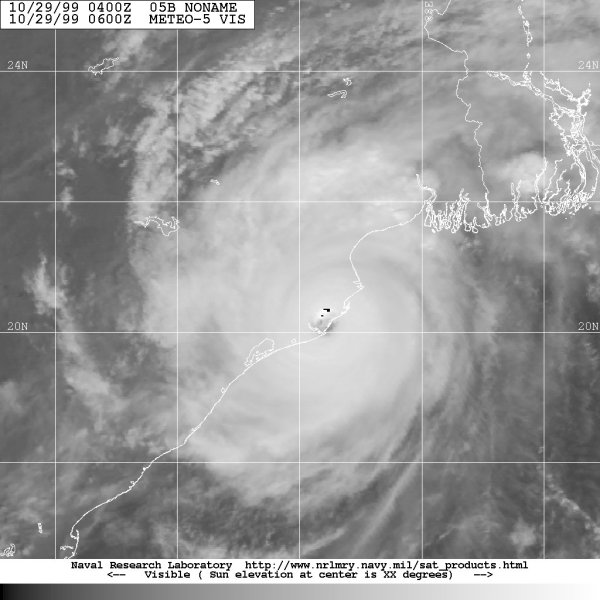 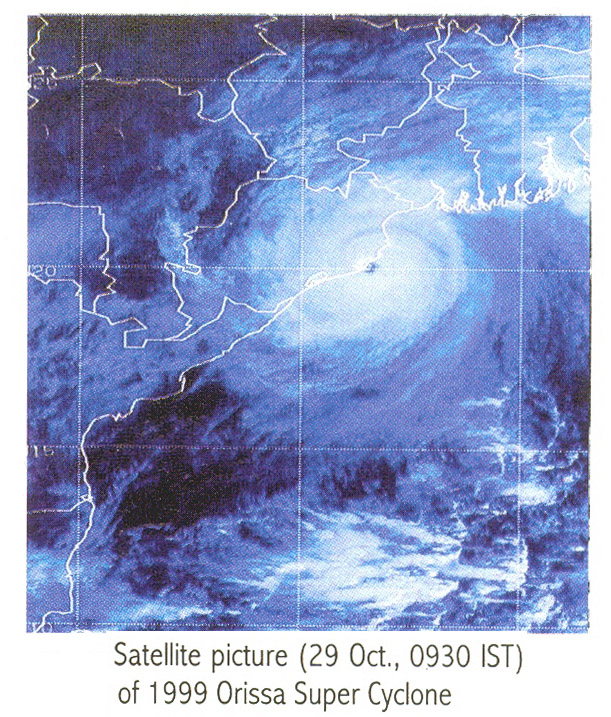 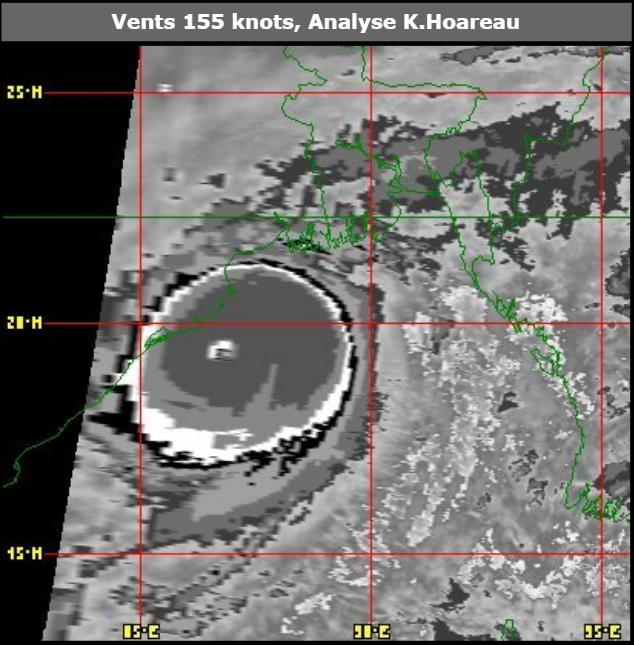 A day late again, but it has been 5 years since 2014's second of the late season intense trilogy of systems, Super Typhoon Nuri. In my opinion, Nuri was the strongest of the three and deserves to be in the conversation with Haiyan '13, Meranti '16, and maybe Hagibis '19 for strongest WPac TC of the past decade. Nuri actually bears strong resemblance to Hurricane Patricia, which occurred in the EPac just one year later. Both featured very cold CDOs with extensive CDG coverage and exceptionally impressive outflow jets extending to the NNE and SSW.

In addition to becoming an exceptionally intense TC, Nuri recurved into the mid-latitudes and re-amplified as one of the most intense extratropical cyclones observed in the Northern Pacific, severely disrupting downstream flow in the process. Truly an incredible system, and one of my all-time favorites.
5 likes
Wayward meteorology student on a journey back to the promised land.

At this time of the year 30 years ago, 1989's Typhoon Gay which developed over the Gulf of Thailand(GoT) struck southern Thailand as a small but exceptionally powerful typhoon. Typhoon-strength systems in the GoT are very rare. JTWC estimated Gay to have been a 100kt category 3 typhoon during its landfall over southern Thailand, but looking at satellite images just before landfall and damages at the landfall area, 100kts might even be conservative. 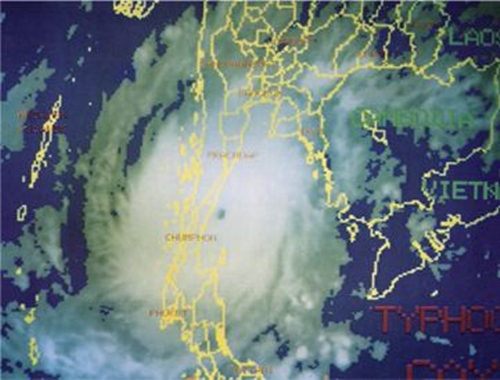 Gay's rapid development over the GoT is fascinating. Here is a 3-hourly GMS-3 satellite animation of the system from Oct 31 1989 12UTC until it crossed southern Thailand (1-hourly satellite images a few hours before landfall). Images are from Digital-Typhoon.

Typhoon Gay caused hundreds of deaths in southern Thailand, which includes those who died from the sunk Seacrest Drillship in the GoT. The eye of Gay reportedly directly passed over the Seacrest on Nov 3 before capsizing. Damage in Chumphon Province, where the typhoon made landfall, was very severe as shown on the images below.

Impressively, Typhoon Gay reintensified over the Bay of Bengal and hit southern India as a category 5 by JTWC and super cyclonic storm by IMD (Gay is also known there as the "Kavali Cyclone") about 5 days after its Thailand landfall. Since the area where it made landfall in India was sparsely-populated, the death toll and damage there was much lower.

Ten years and two days ago, Super Typhoon Nida reached its peak intensity and achieved a rare T#8.0 appearance almost identical to Haiyan four years later, CDG band and all. It was officially assessed at 155 kt, but I think we can all agree it was easily 170 kt.
1 likes
I am a meteorology enthusiast, not a professional meteorologist; take what I say lightly and look to your local weather agency (NHC, CPHC, JTWC, etc) or the pros for better information.
Top

15 years ago today in 2004, Subtropical Storm Otto formed in the North Atlantic. It would soon transition to a tropical storm and become one of only a handful of storms to exist in the month of December, which is normally considered off-season. 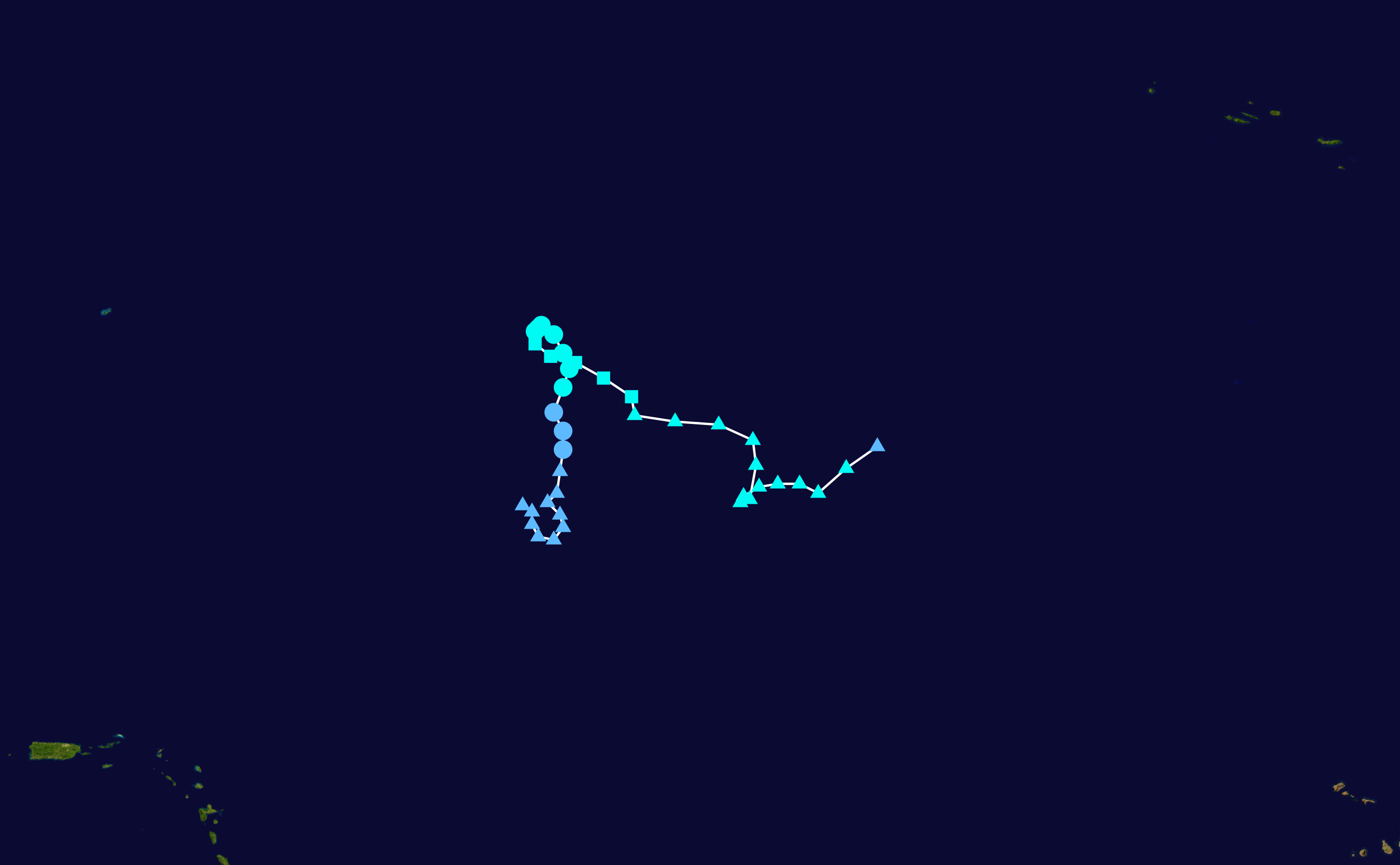 Like aspen mentioned above, we look back at the beast of 11/25/2009...Super Typhoon Nida when it went off the charts!

The final of 2014's intense trilogy of super typhoons achieved peak intensity 5 years ago today. Super Typhoon Hagupit was assessed to reach 155 kt by JTWC on December 4th, 2014. Originally feared to be another Haiyan-type scenario in a similar landfall location just 13 months after the infamous system, Hagupit made landfall in the Philippines a few days later after falling off from its peak intensity. 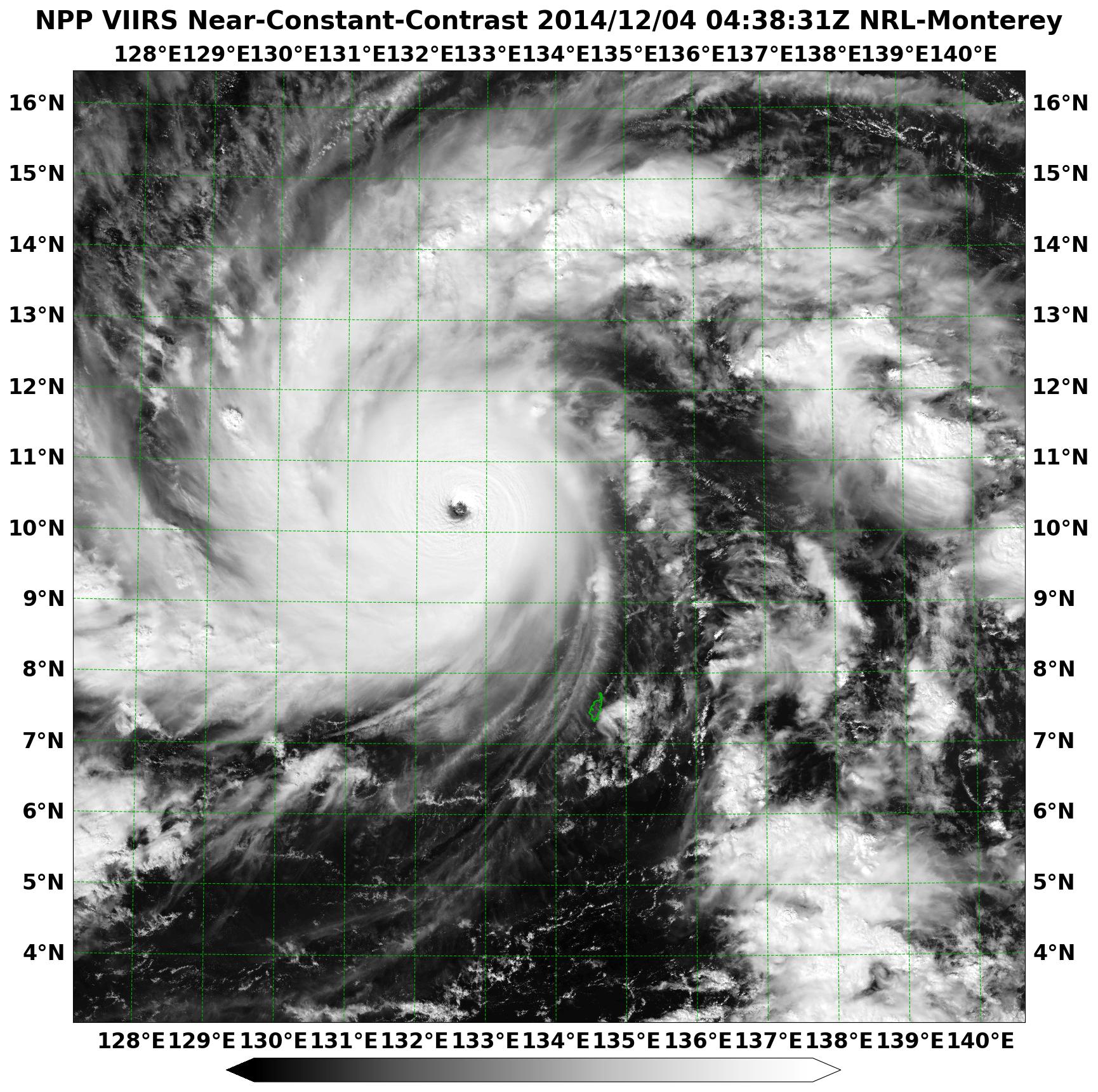 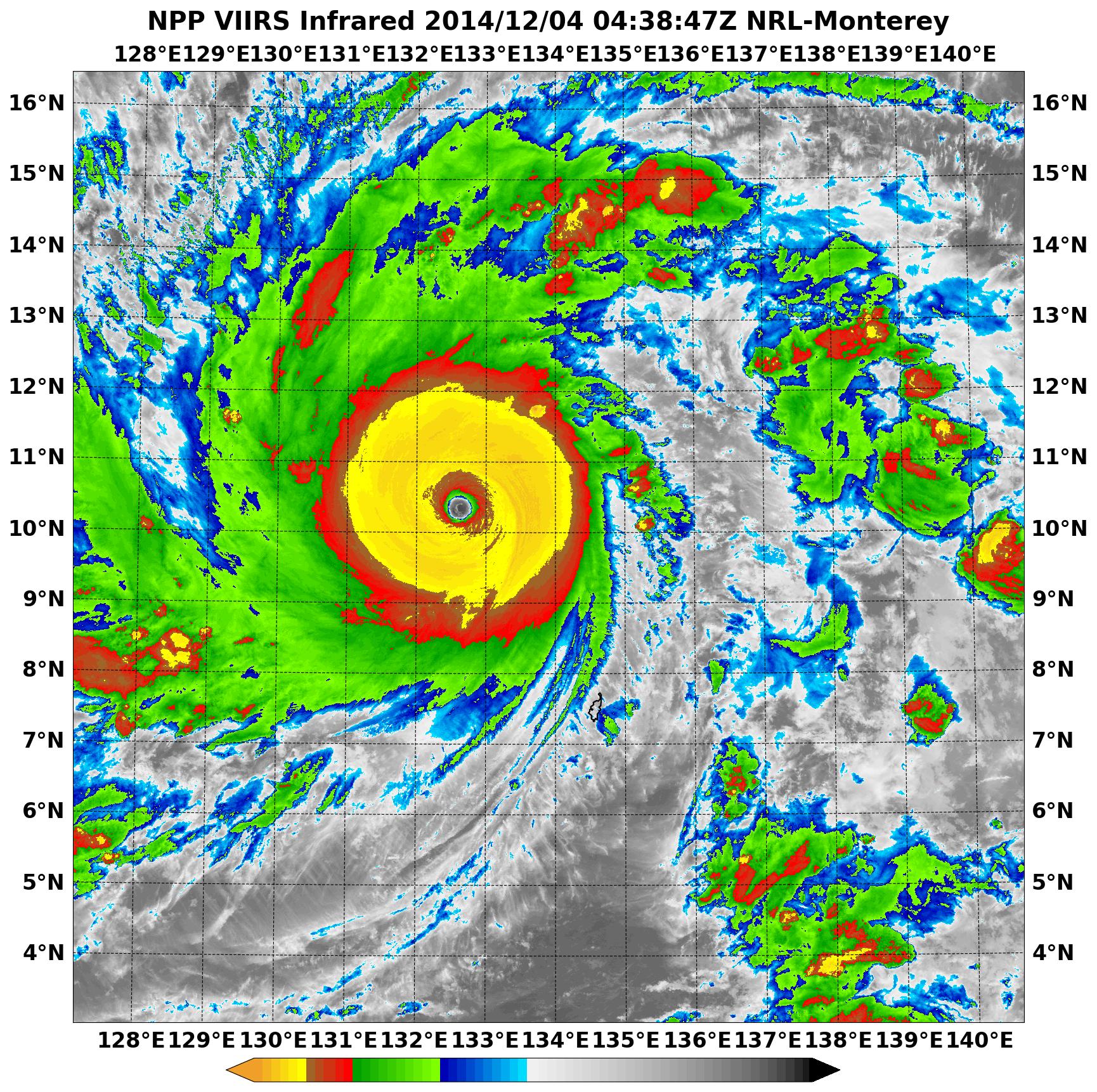 1900hurricane wrote:The final of 2014's intense trilogy of super typhoons achieved peak intensity 5 years ago today. Super Typhoon Hagupit was assessed to reach 155 kt by JTWC on December 4th, 2014. Originally feared to be another Haiyan-type scenario in a similar landfall location just 13 months after the infamous system, Hagupit made landfall in the Philippines a few days later after falling off from its peak intensity.

I wouldn’t be surprised if it did match Haiyan’s intensity. It sure looked like a near-T#8.0 storm on Dvorak imagery.
0 likes
I am a meteorology enthusiast, not a professional meteorologist; take what I say lightly and look to your local weather agency (NHC, CPHC, JTWC, etc) or the pros for better information.
Top

75 years ago on December 17, 1944, a severe typhoon impacted the US Third Fleet in the Pacific to the east of the Philippines. The system, known as Typhoon Cobra or Halsey's Typhoon, sunk a few of the ships in the fleet and damaged a couple dozen more or so, some severely. The impact of this powerful system led to an increase in study and reconnaissance in these systems, a process that actually resulted in the creation of the Joint Typhoon Warning Center many years later.

Strangely, the typhoon isn't listed in IBTrACS...
4 likes
Wayward meteorology student on a journey back to the promised land.

Possibly one of the strongest cyclones to have ever existed in the North Indian basin is the "Rameswaram / Dhanushkodi Cyclone" from December 1964 (55 years ago). The cyclone first struck the northern part of Ceylon (present-day Sri Lanka) and then South India. The TIROS VIII satellite captured an image of the cyclone on Dec 21, 1964 (below), and applying a technique by Timchalk et al. (1965) for estimating TC wind speeds from TIROS images, the IMD estimates an intensity of 130kts (3-min sustained) for this cyclone, which would be equivalent to a super cyclonic storm on IMD's scale today. 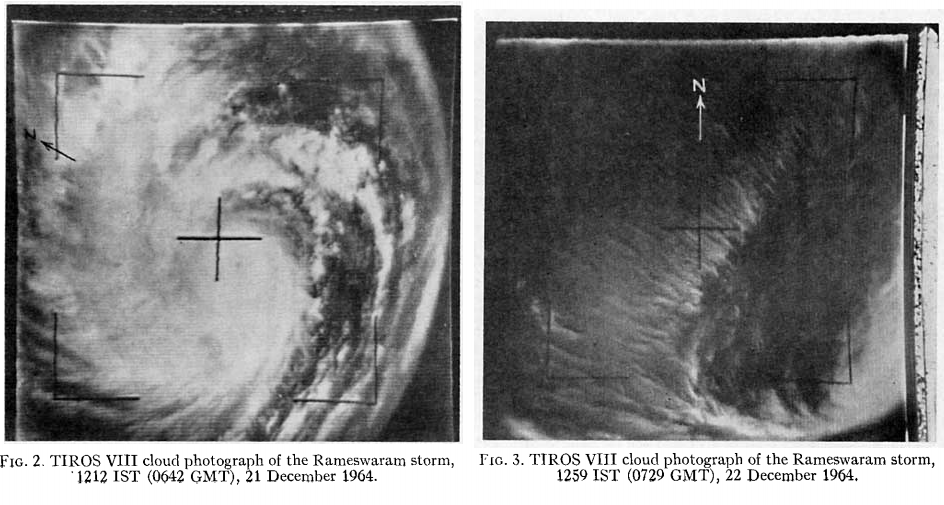 The cyclone indeed looks pretty intense on the TIROS image, and that time was also exhibiting a pinhole eye that was ~7km in diameter. Observations from Trincomalee, Ceylon also generally agree with the 130kt estimate, where wind speed estimates ranged from 120-150kts. However, wind speed estimates were higher in another town in northern Ceylon @ 150-175kts. Unfortunately, there wasn't much direct pressure observations from Ceylon. The lowest recorded pressure was 978mb in Mannar on the west coast of the country, but this was more likely representative of the already weakened system after it had already made landfall. 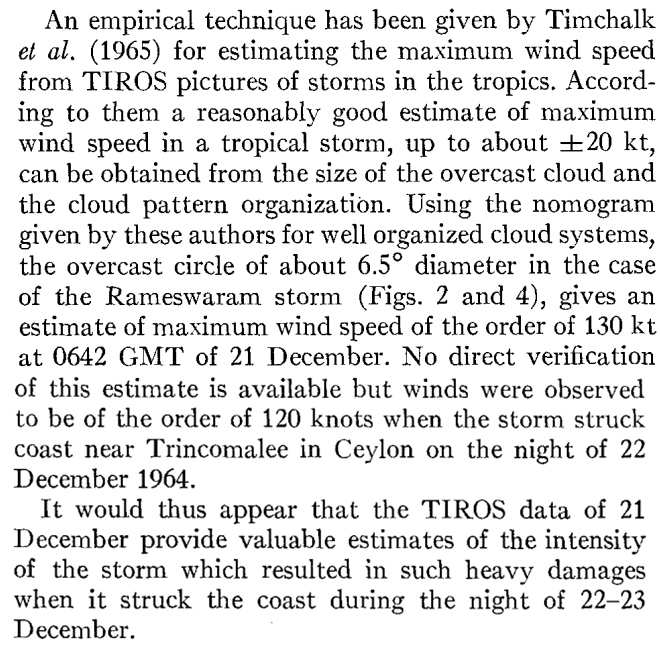 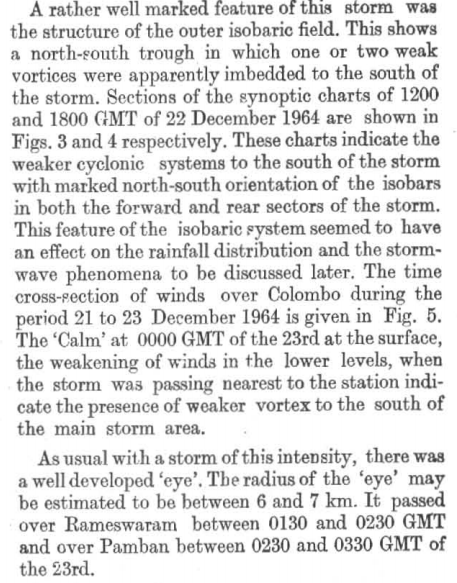 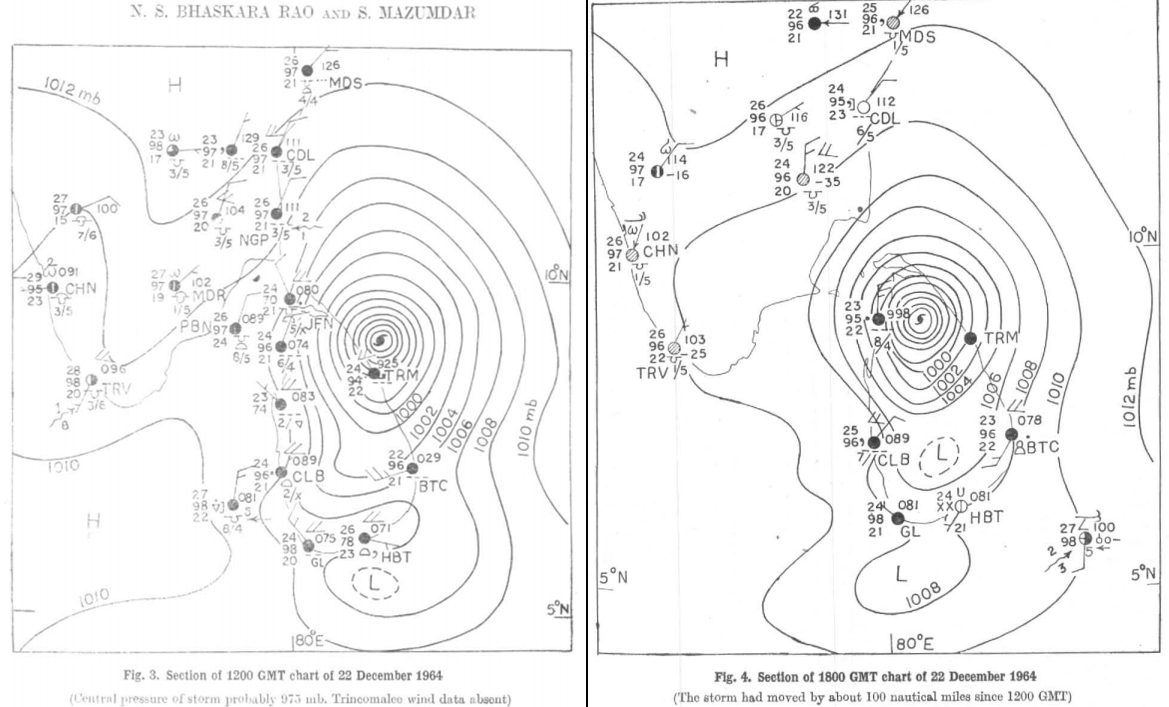 Another interesting thing about the 1964 cyclone is that it formed and remained at a pretty low latitude. The system was first noted as a depression near 4.5N 93.0E (just off the northern tip of Sumatra) on Dec 16, 1964. On the morning of the 20th, it was centered near 5.5N 90.0E as a cyclonic storm. At time of the TIROS satellite image above on the 21st (when the intensity was estimated to be 130kts), the cyclone was only at/near 6.5N latitude. Such occurrence is rare in the Indian Ocean. 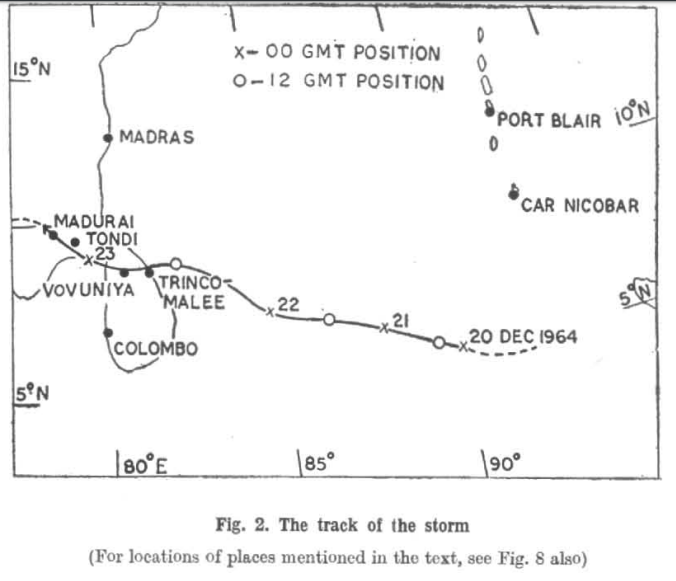 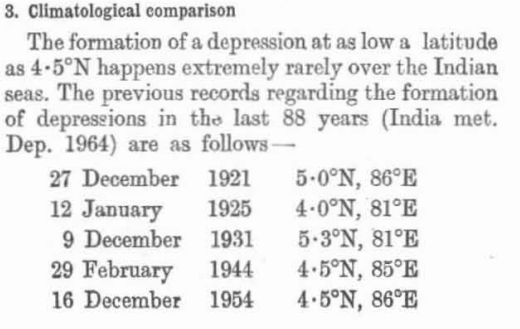 Aside from Ceylon where at least 1000 people died, India's Rameswaram island (located between South India mainland and Ceylon) was also badly-hit. The town of Dhanushkodi on the SE edge of the island was destroyed by the cyclone and was abandoned / never rebuilt since then. At least 800 died in Dhanushkodi alone, including 100-200 passengers on board a passenger train that was derailed when the storm surges hit. 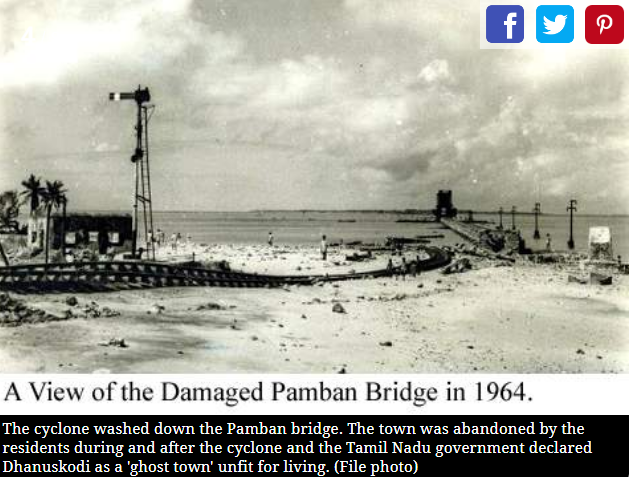 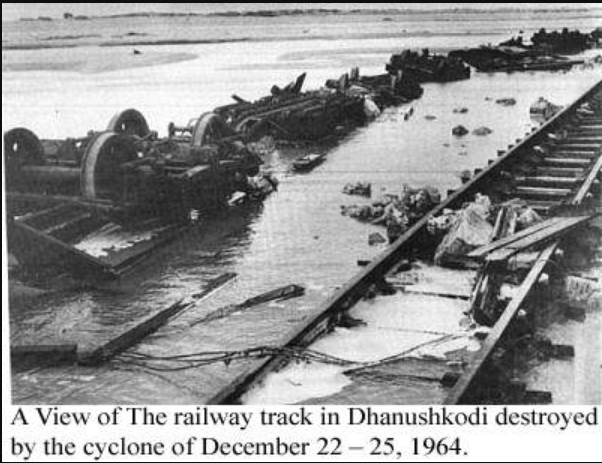 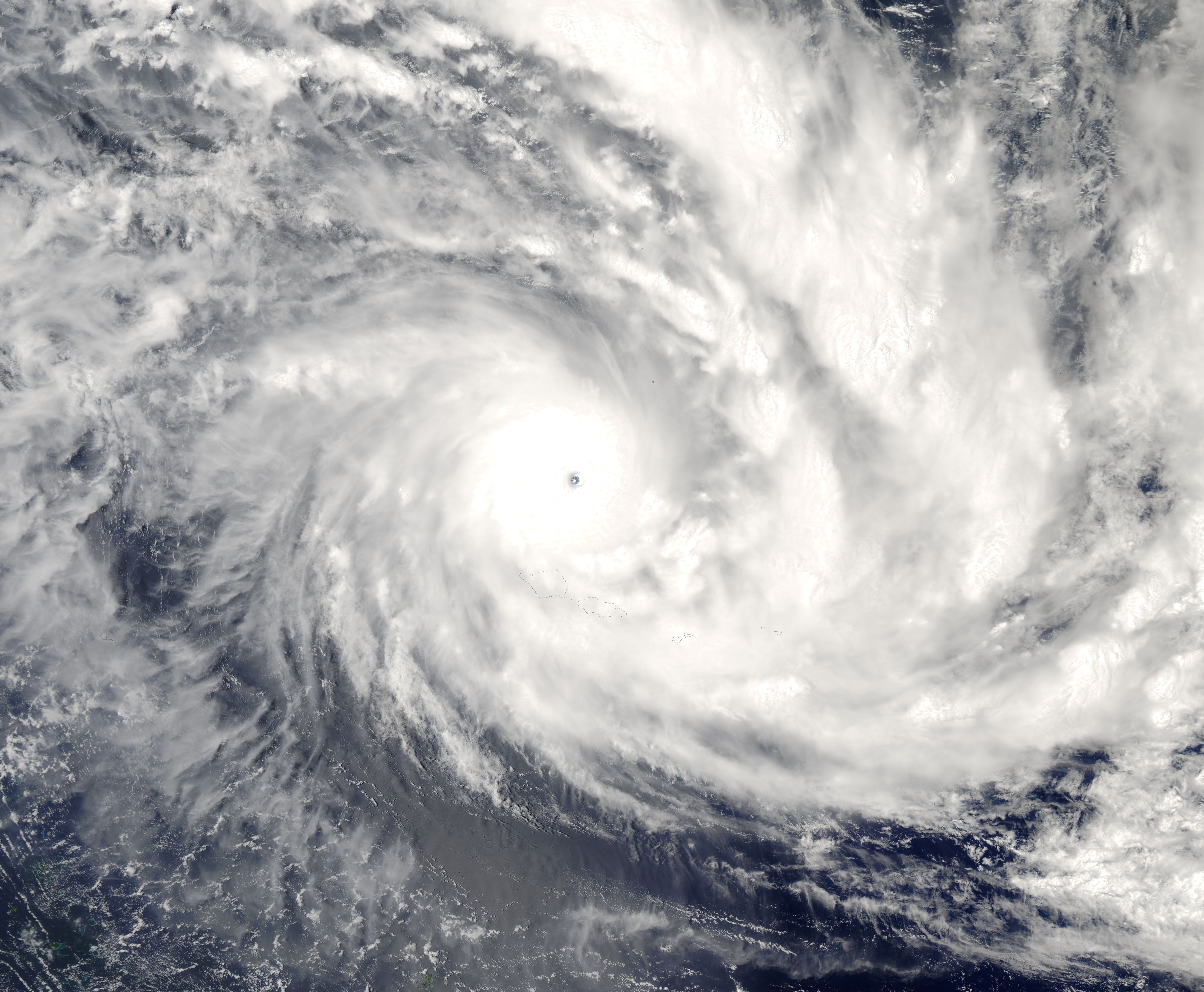 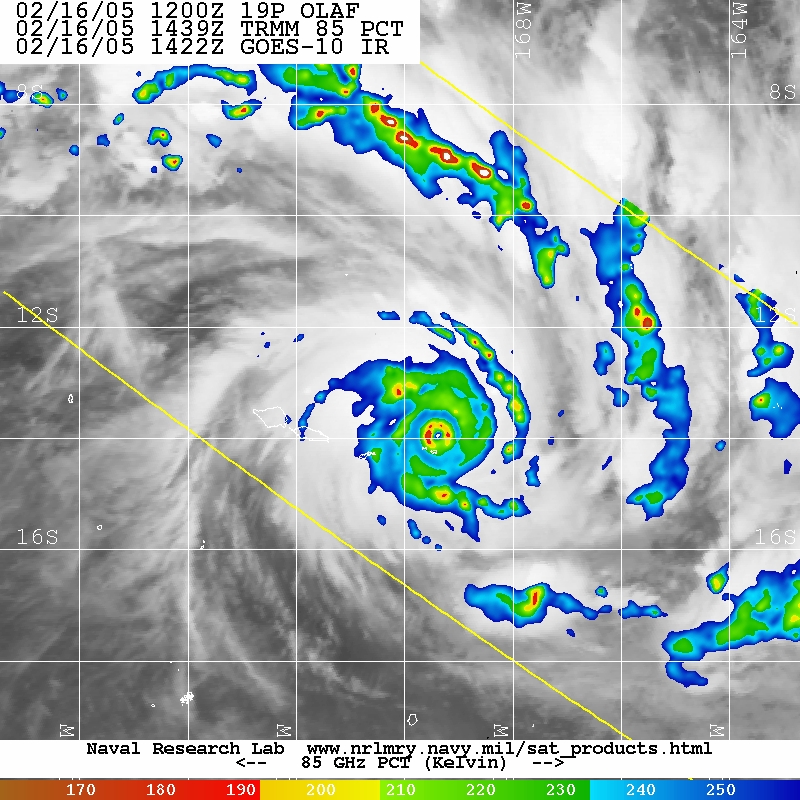 4 likes
Wayward meteorology student on a journey back to the promised land.

Five years ago on this date (March 31), SuperTyphoon Maysak became the strongest pre-April TC on record in the NW Pacific basin.

How about two for May 9th?

On this date in 2000, 20 years ago, Super Typhoon Damrey reached a JTWC estimated peak intensity of 155 kt over the open Western Pacific. Damrey was the first use of the Western Pacific naming scheme that is still going strong today, and it certainly kicked off the new names with a bang! 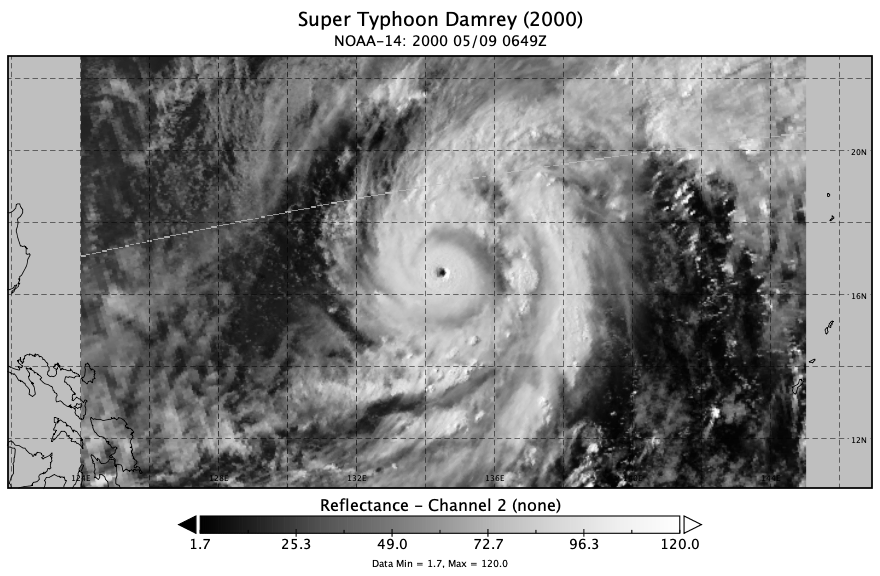 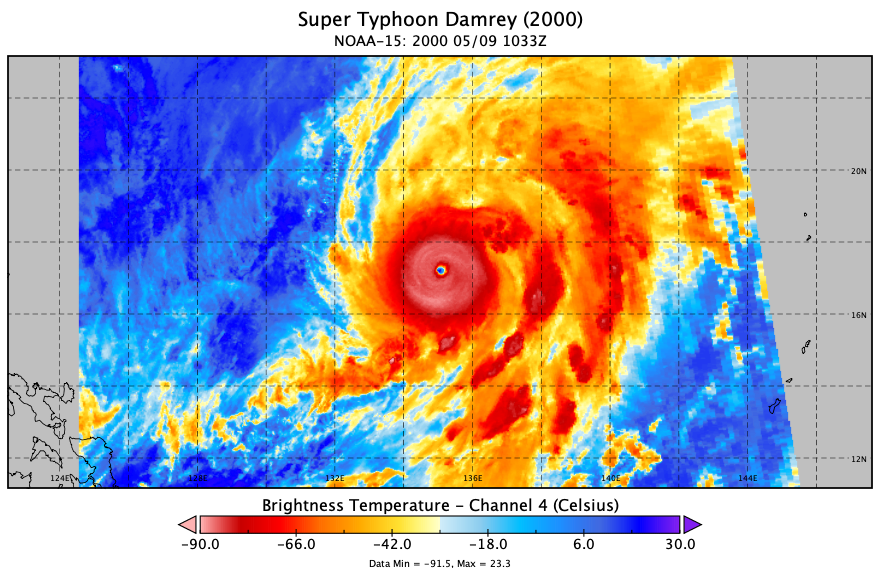 4 likes
Wayward meteorology student on a journey back to the promised land.