Some Bad Hurricane Ike Art & Writing from 10 Years Ago

Some Bad Hurricane Ike Art & Writing from 10 Years Ago

So...uh...yeah. It's the 10th anniversary of Hurricane Ike's landfall. It's been a while, hasn't it?

I was in Dallas at the time, but I still vividly recall calling my father, who was riding out the storm at our house, and hearing his normal blase personality change to one of panic and fear. He kept exclaiming with each gust that the roof would come off, that the house felt like would lift off its foundation, and the horrible nature of the sound of the wind, how ghostly and frightening it sounded. Fortunately, the roof did not ultimately lift off (though it did get damaged), but when you're in the midst of it all in an old house that isn't really built to withstand hurricane force winds, you never really know.

Now, although my family lives in Houston, my father works in Galveston, and after the storm I went with him to see how his workplace had fared. The drive there was surreal to say the least. There were boats and mounds of debris piled by the highway. The first floor of even tough concrete high rise buildings had all been completely gutted by the surge.
Curious as I was, I decided to go inside one of the buildings to check out what had happened. While I was walking there, my dad started shouting. I looked up and stopped to see a downed power cable hanging right in front of me, below it a puddle of water still remaining. I don't know if it was still connected to power or not, but it was nonetheless a sobering experience to see how fragile the line between life and death can be.

After I returned to Houston, I coped with the devastation I had seen the only way a teenager going through a bad emo phase would: crappy poetry. I have pasted the poem I wrote below...
==============
Iked

There was nothing but wind,
The wind was all.
The wind became you, and you
the wind.
Each gust rocked the house as an earthquake,
its voice making itself felt
in rattling cupboards
and splintering timbers.

You huddled alone in the closet.
Your fish were long dead.
I was wondering if you’d come back.
But its eye was set on one thing:
You.
You were what it was looking for.
The sound of the surge breaking on the jetty,
the roar of the tides beating on rocks,
all the fury was crying out
for You.

You must’ve recalled the cloud
we abandoned at the wharf
in the eastern seas,
The cloud must’ve recalled you, too,
for it had come.
And it must’ve simply been too much,
far too great a load for one child to bear.

So you’re gone.
There. I said it.
You’re never coming back.
You have become one with the wind.
You have given your life to the limitless waters
and your soul to the traveling air.

So, yeah. Bad melodramatic poetry.
I also in the months following Ike first got my hands on a graphics tablet, which lead me to draw this: 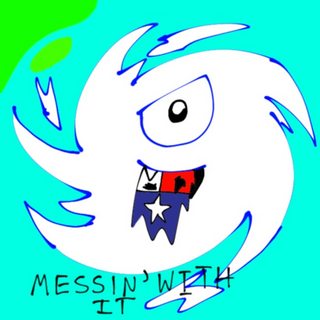 ...I don't know what I was thinking. Probably to make a bad T-shirt like one of those silly "I survived Hurricane Ike" shirts everyone was selling. (I have a huge collection of those back in my family's house...maybe will post them some day.)

Some people have been comparing Hurricane Florence to Ike. I hope those of you on the Carolina coasts won't have to deal with that level of surge.
3 likes
I know I can't straddle the atmosphere...just a tiny storm in your teacup, girl.
Top
Post Reply
1 post • Page 1 of 1