After Kammuri, it just reaffirms that I like sleeper (or underperformed by the models) TCs more so I'd appreciate it if models don't hype the intensity on the next one, just forecast the intensity like Halong or something similar, whether the TC performs under or over, at least there is no high expectations. 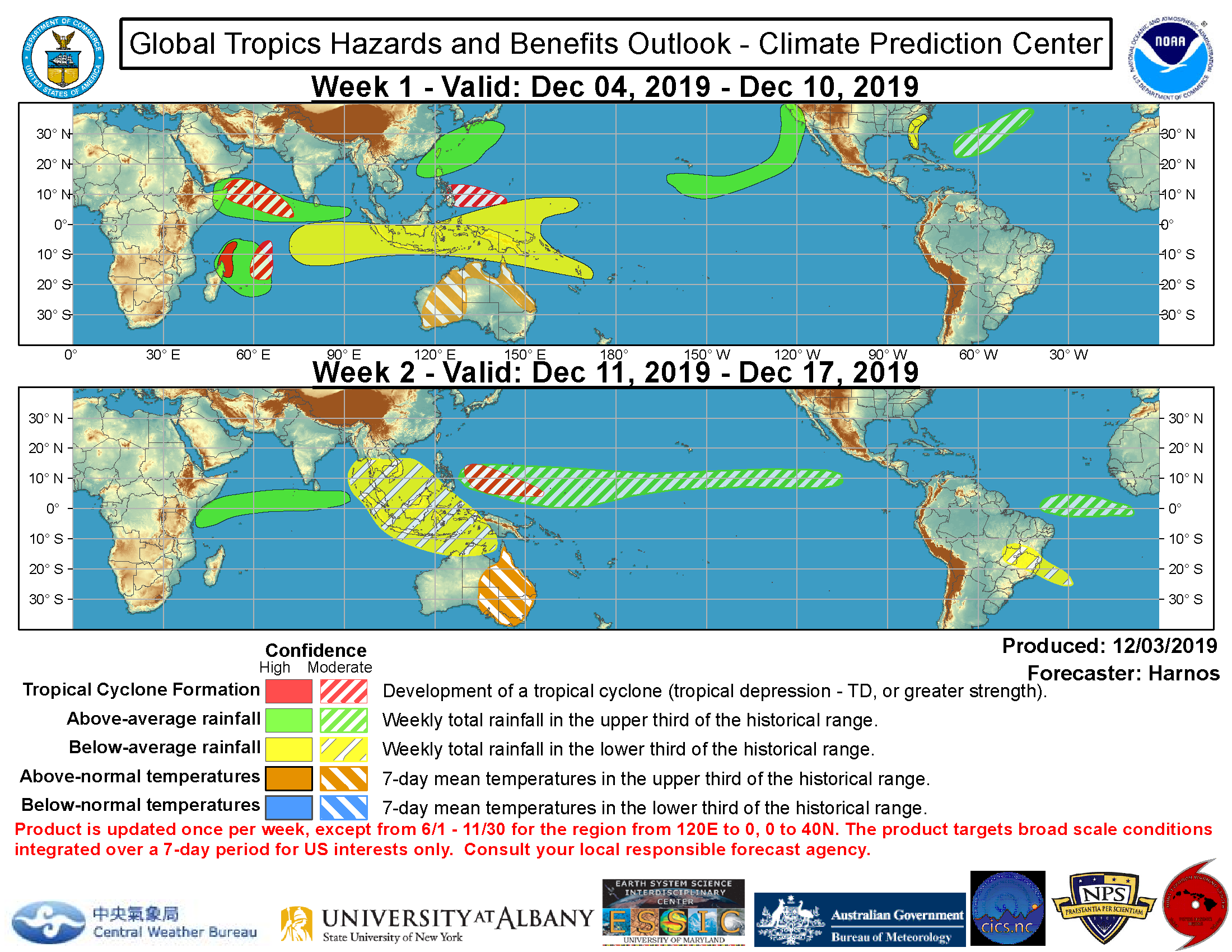 Lastly, Rossby wave activity continues to be forecast east of the Philippines during Week-2, resulting in moderate confidence for tropical cyclogenesis across a slightly eastward shifted region relative to that of Week-1. 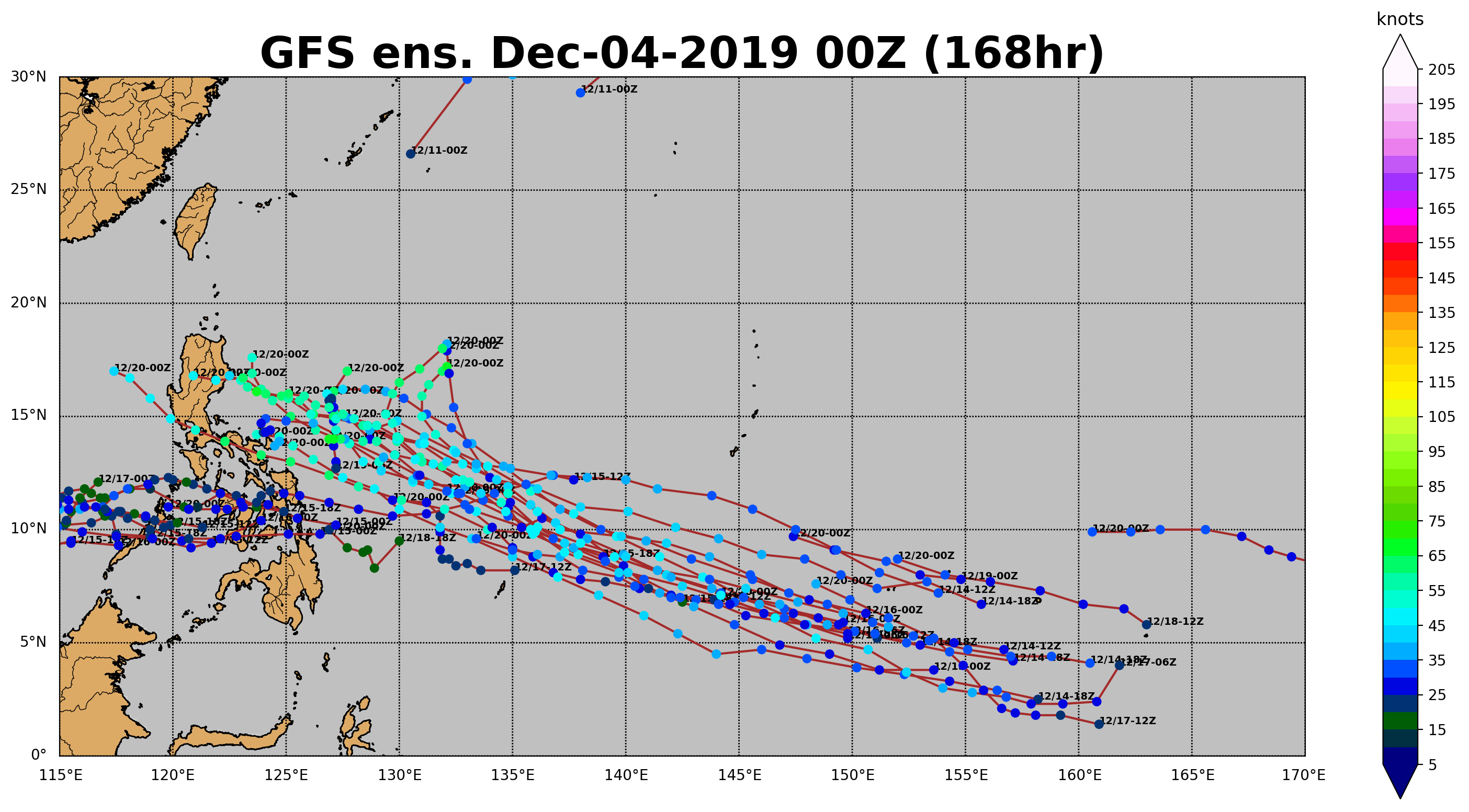 dexterlabio wrote:GFS ensembles hinting on 2019's last hurrah on the second half of December. Perhaps this is only a noise but with the Indian Ocean having another period of activity, it seems like WPAC will follow. This has been my observation for the past several weeks, it looks like the activity in the IO and WPAC is somehow connected.

Makes sense since the favorable atmospheric signal that caused activity in the Indian Ocean would propagate eastward to the Pacific.
1 likes
Top

We might get something as the MJO moves into the WPac, but that potential system is so far out (>250 hrs) that there’s a good chance it’s just noise or a GFS phantom.
1 likes
I am a meteorology enthusiast, not a professional meteorologist; take what I say lightly and look to your local weather agency (NHC, CPHC, JTWC, etc) or the pros for better information.
Top

Looking pretty quiet out there.
0 likes
Wayward meteorology student on a journey back to the promised land.

GFS and Canadian got some imaginary noise at 200+hr
0 likes
The posts in this forum are NOT official forecast and should not be used as such. They are just the opinion of the poster and may or may not be backed by sound meteorological data. They are NOT endorsed by any professional institution or storm2k.org. For official information, please refer to RSMC, NHC and NWS products.
Top

The 2019 Typhoon Season will officially end in a matter of hours. The season produced an early-season category 5 supertyphoon ("Wutip") in February, which is the strongest February tropical cyclone on record anywhere in the Northern Hemisphere. The formation of Wutip was thought to be a possible sign of strong tropical activity on the months to follow, however, the second typhoon of the season didn't develop until August. Despite this, the 2019 season ends as an average or near average season due to an uptick in activity that occurred during the last quarter of the year.

The second supertyphoon of the season, "Lekima", also formed on August and badly impacted Eastern China. There were quite a number of storms that affected the Korean Peninsula and Japan. "Lingling" made landfall over North Korea at typhoon intensity, becoming the only typhoon on record to move into the country. Two notable typhoons to strike Mainland Japan this year were "Faxai" and "Hagibis", both of which moved near/over Tokyo area and caused significant damages to the country. SuperTyphoon "Halong", the strongest system of the season, fortunately did not threaten any land areas. The Philippines was holding on pretty well this season until the country was impacted by two strong typhoons during the last month of the year, "Kammuri" and "Phanfone", with the latter passing through the country on Christmas Day.

Happy New Year to everyone!

Here's my final 2019 numbers based on JTWC data. 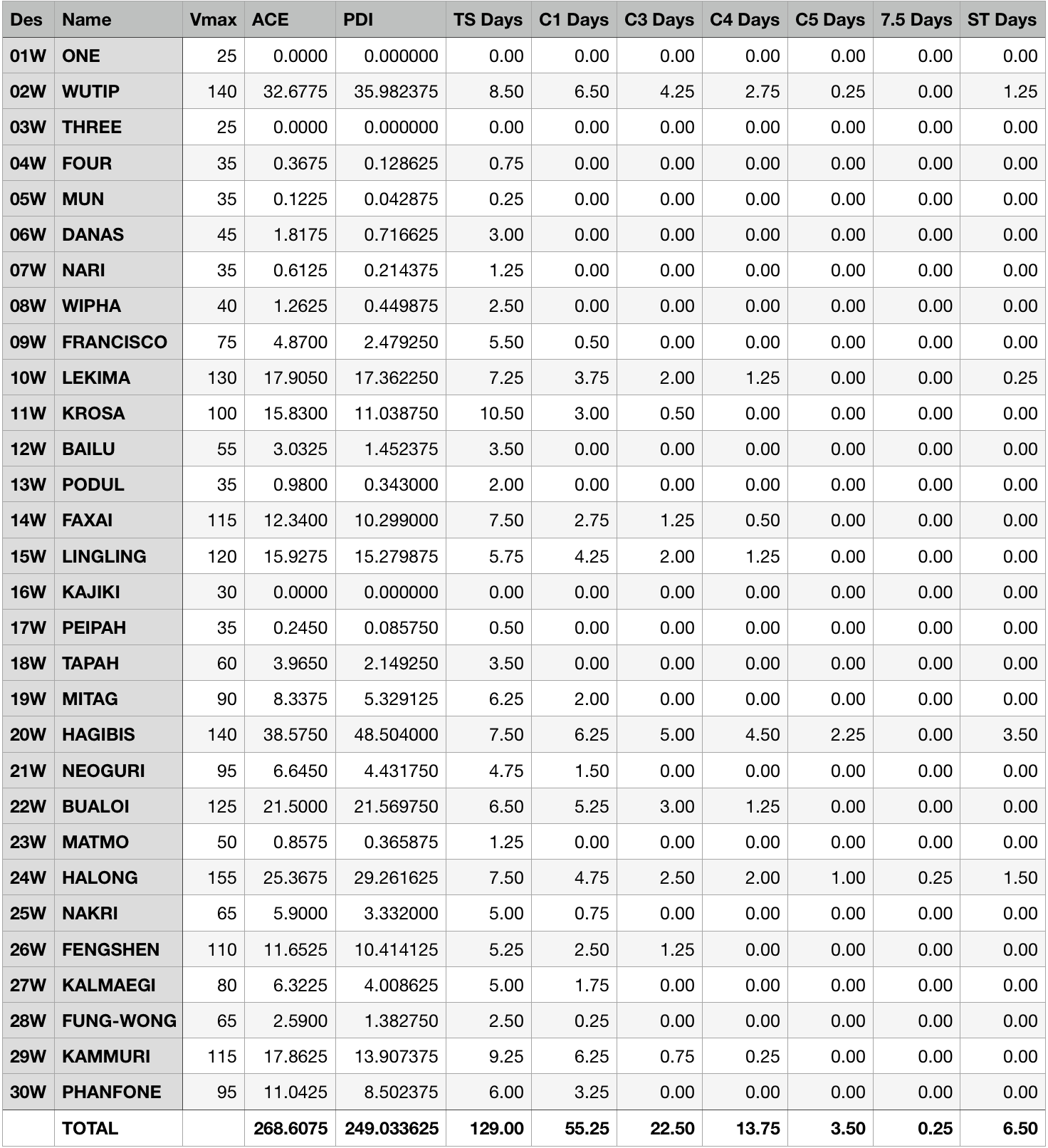 3 likes
Wayward meteorology student on a journey back to the promised land.