With the MJO over the IO and the strongest standing wave on the planet over the IO, the late fall WWB should've ended around the 20th of November. But an equatorial Rossby Wave (or some lingering background El Nino forcing?) continues to push westerlies just west of the dateline. 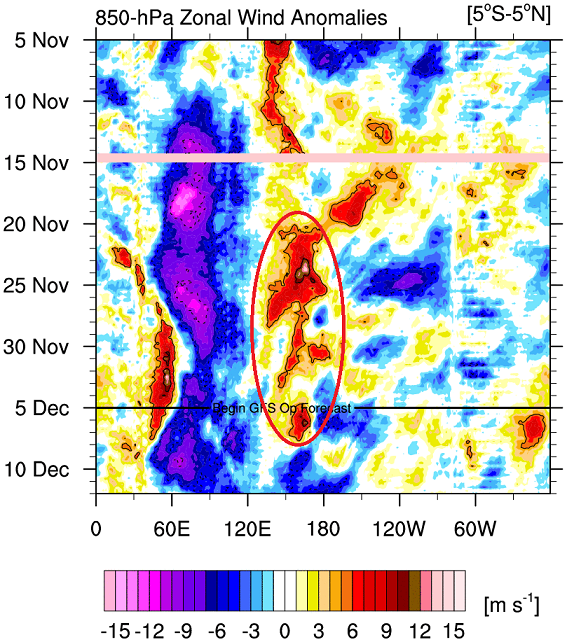 There's a decent upwelling Kelvin wave moving into the EPAC which should cool the Nino regions further. But there's also a new downwelling Kelvin wave moving east from the WPAC. So i'm assuming there's enough warmth to keep OND and NDJ positive. So if this happens, based on the ONI chard I think the last time this happened was in 1976-1977 although that year had warmer SST's ONI.
3 likes
Top

Today's update will be:

Up and down continues from week to week.
1 likes
Top

Above-average sea surface temperatures (SSTs) were observed in the central tropical Pacific Ocean during November, with regions of above and below average SSTs observed farther east [Fig. 1]. In the most recent week, the SST indices were near average in the east-central and eastern Niño regions (+0.1°C to +0.3°C) and were above average in the westernmost Niño-4 region (+0.9°C; [Fig. 2]). The equatorial subsurface temperature anomalies (averaged across 180°-100°W) returned to near zero during the month [Fig. 3], reflecting the progression of Kelvin waves to the east [Fig. 4]. The low-level winds were near average during November, while easterly upper-level wind anomalies were observed over the western Pacific. Finally, tropical convection was suppressed near and east of the Date Line and also over Indonesia, and somewhat enhanced over the western Pacific northeast of Papua New Guinea [Fig. 5]. The overall oceanic and atmospheric system was consistent with ENSO-neutral.

The majority of models in the IRI/CPC plume [Fig. 6] continue to favor ENSO-neutral (Niño-3.4 index between -0.5°C and +0.5°C) through the Northern Hemisphere summer. Many dynamical model forecasts suggest Niño-3.4 SST index values may remain near +0.5°C into December before decreasing toward zero. Forecasters agree with this consensus and believe the chances for El Niño to be 25-30% during the winter and spring. In summary, ENSO-neutral is favored during the Northern Hemisphere winter 2019-20 (70% chance), continuing through spring 2020 (~65% chance; click CPC/IRI consensus forecast for the chance of each outcome for each 3-month period). 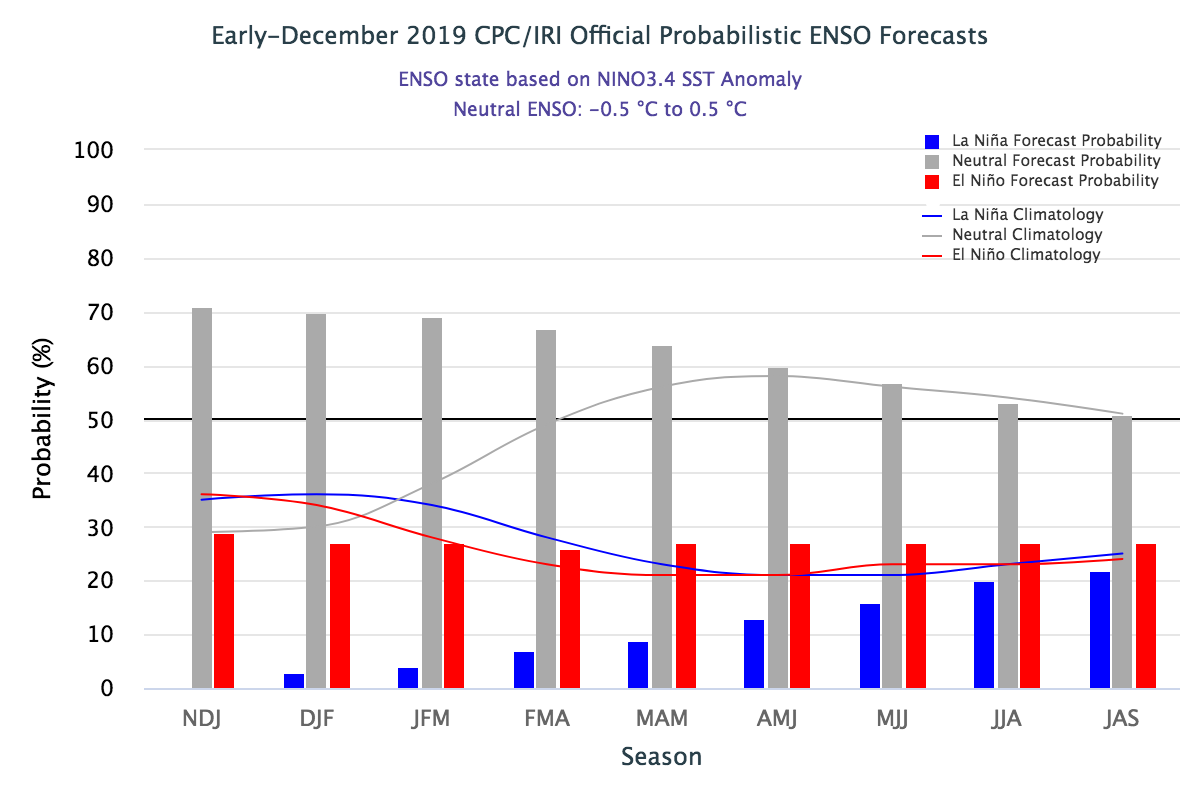 GFS and some Euro guidance recently have been showing the MJO hopscotching the MC, and ends up over the WPAC stronger. So it's possible we see a WWB in a week or so. 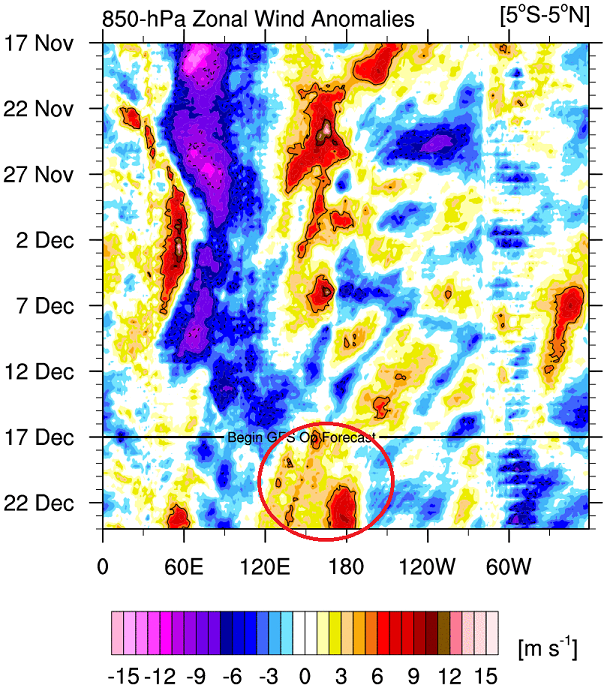 Some interesting developments occurring. Wonder what will happen into 2020. Would be a bit more straightforward if it weren't December, since ENSO events tend to peak now. Does the building of El Niño continue? Or will it back off into spring. Definitely will be watching
5 likes
This post was probably an opinion of mine, and in no way is official. Please refer to http://www.hurricanes.gov for official tropical analysis and advisories.

Yeah it is what it is. Kudos to Eric Webb for simply pointing this out. We're seeing consistent westerlies near the dateline since late October AND low level pressure bias continues to be centered near the dateline. Atmospherically the door still looks open for El Nino, but it remains to be seen if the ocean responds.

I have to admit this is surprising. As I thought coming off a weak El Nino (or a failed double El Nino attempt) we would be in cool neutral trending towards La Nina by now, especially with multiple upwelling Kelvin waves progressing east during the summer, as well as other indicators: 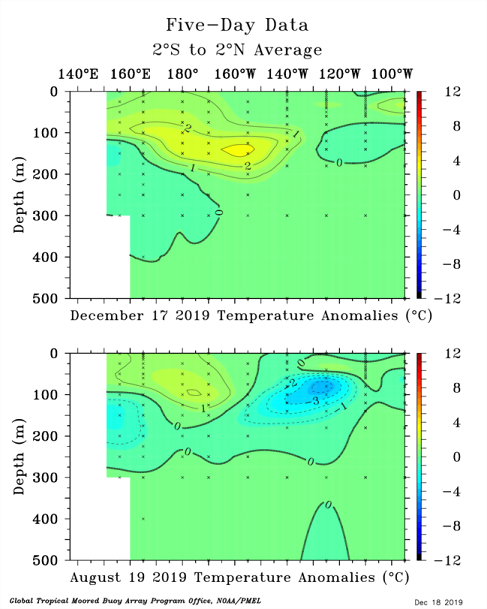 The SOI might be dated but it was telling us something when it refused to switch positive.
3 likes
Top 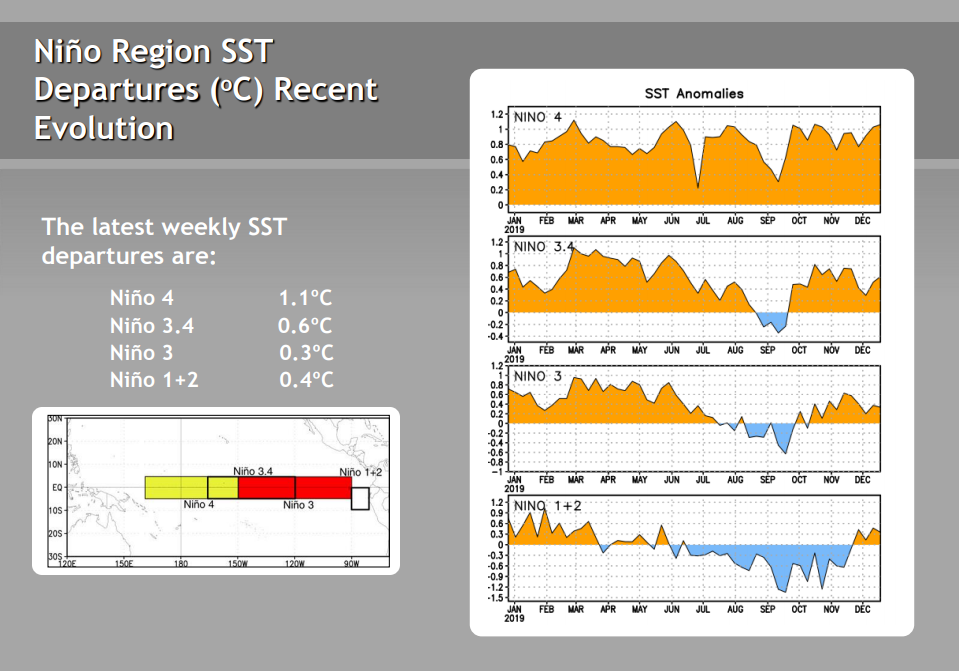 Nino regions continue this up and down. Any indications the regions will stabilize in the future?

Nino regions continue this up and down. Any indications the regions will stabilize in the future?


Sent from my iPhone using Tapatalk

Nino 3.4 will probably hover between 0.0C and +1.0C until early spring, due to a downwelling Kelvin wave moving east that's been aided by continued WWBs over the dateline: 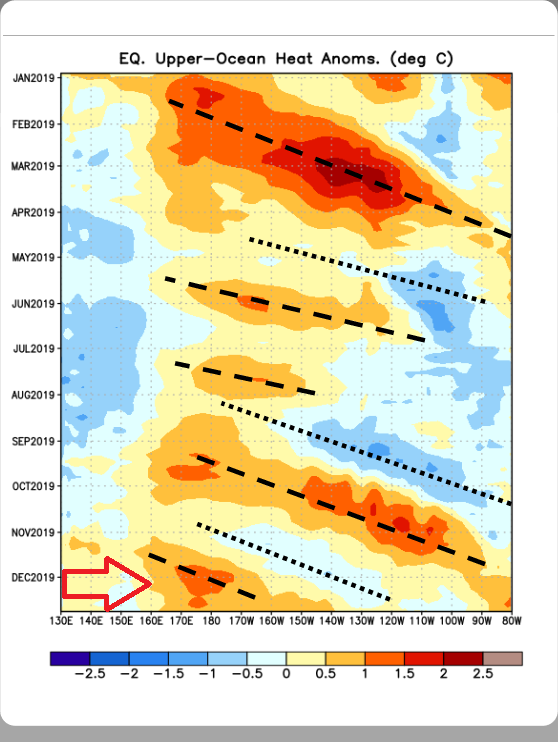 Since 2014 we've seen strong WWB's between January and February. I think that will continue this year since the latest EPS 46 day forecast continues to show a strong concentration of -VP200 anomalies over the dateline by the 2nd week of January, which probably means a strong MJO pulse that will result in another strong WWB. 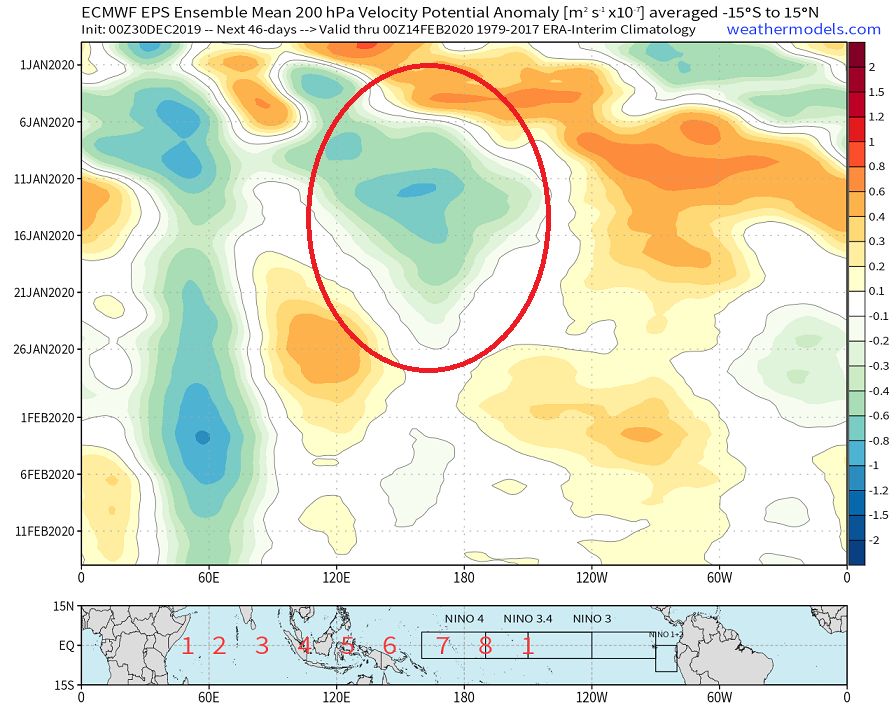 I think its easy to call for warm-neutral/weak El Nino conditions to continue until mid spring. The real question is what happens after spring going into the summer? Models and forecasts have struggled considerably to make the right call since 2017. I think its important to keep an eye out for the SOI. A strong MJO pulse there in a week or so may help kill the sinking branch that's been situated over the MC and maybe open the door for a La Nina during the summer.
4 likes
Top

To correct my previous post, Eric Webb tweeted yesterday that the abundance of -VP200 anomalies moving over the dateline after January 11 is likely due to a CCKW and not the MJO (which the RMM seems to be indicationg):
https://twitter.com/webberweather/status/1211723583657041926

In the immediate future, I think Nino 3.4 will remain in that general area. Buoys are showing +1.0C anomalies surfacing and expanding east into Nino 3.4 with still most of the warm anomalies yet to make it the EPAC. 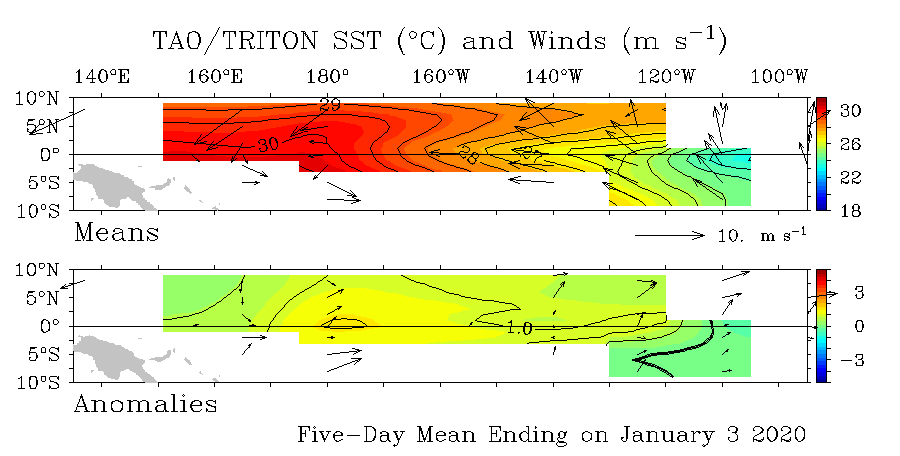 CCKW/MJO pulse thats currently over the MC means a trade burst over the dateline will occur soon: 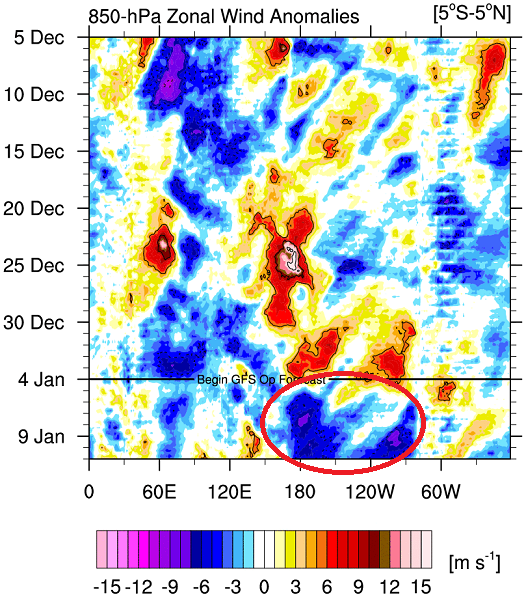 I believe this will keep the Nino regions in check and stop them from reaching above moderate Nino thresholds. Though this same CCKW/MJO pulse will move into the Pacific by mid January and we'll likely see another WWB then.

It will be tough to get hints from the subsurface on where ENSO will be come hurricane season. The subsurface is currently warmer than the past 6 years at this point in time BUT it also closely resembles 2005 once again.
3 likes
Top

Re: ENSO: CPC January update: 50% chance of Neutral thru Summer

CPC January update has 50% chance of Neutral thru the Summer.

During December 2019, near-to-above-average sea surface temperatures (SSTs) were evident over the equatorial Pacific Ocean [Fig. 1]. Most SST indices increased in the past week, with the eastern Niño-1+2 and Niño-3 regions remaining near average (+0.1°C to +0.3°C), while the Niño-4 and Niño-3.4 regions were warmer at +1.2°C and +0.7°C, respectively [Fig. 2]. The recent increase in SST anomalies was partially driven by a combination of low-level westerly wind anomalies and the growth in positive equatorial subsurface temperature anomalies (averaged across 180°-100°W; [Fig. 3]). The latter indicates a downwelling Kelvin wave, which was evident in the above-average temperatures in the central and east-central Pacific Ocean [Fig. 4]. Over the month, westerly wind anomalies persisted over small regions of the western and eastern equatorial Pacific Ocean, while upper-level winds were near average over most of the equator. Tropical convection remained suppressed over Indonesia and east of the Date Line, and was enhanced to the west of the Date Line [Fig. 5]. The overall oceanic and atmospheric system was consistent with ENSO-neutral, though recent observations reflected a trend toward warmer conditions that will be monitored.

The majority of models in the IRI/CPC plume [Fig. 6] continue to mostly favor ENSO-neutral (Niño-3.4 index between -0.5°C and +0.5°C) through the Northern Hemisphere summer. For the December 2019-February 2020 season, the Niño-3.4 index is predicted to be near +0.5°C, which is consistent with the latest observations. The forecasters also favor above-average ocean temperatures to continue in the next month or two, but, in alignment with most model guidance, do not foresee a continuation over several consecutive seasons or shifts in the atmospheric circulation that would indicate El Niño. In summary, ENSO-neutral is favored through Northern Hemisphere spring 2020 (~60% chance), continuing through summer 2020 (~50% chance; click CPC/IRI consensus forecast for the chance of each outcome for each 3-month period). 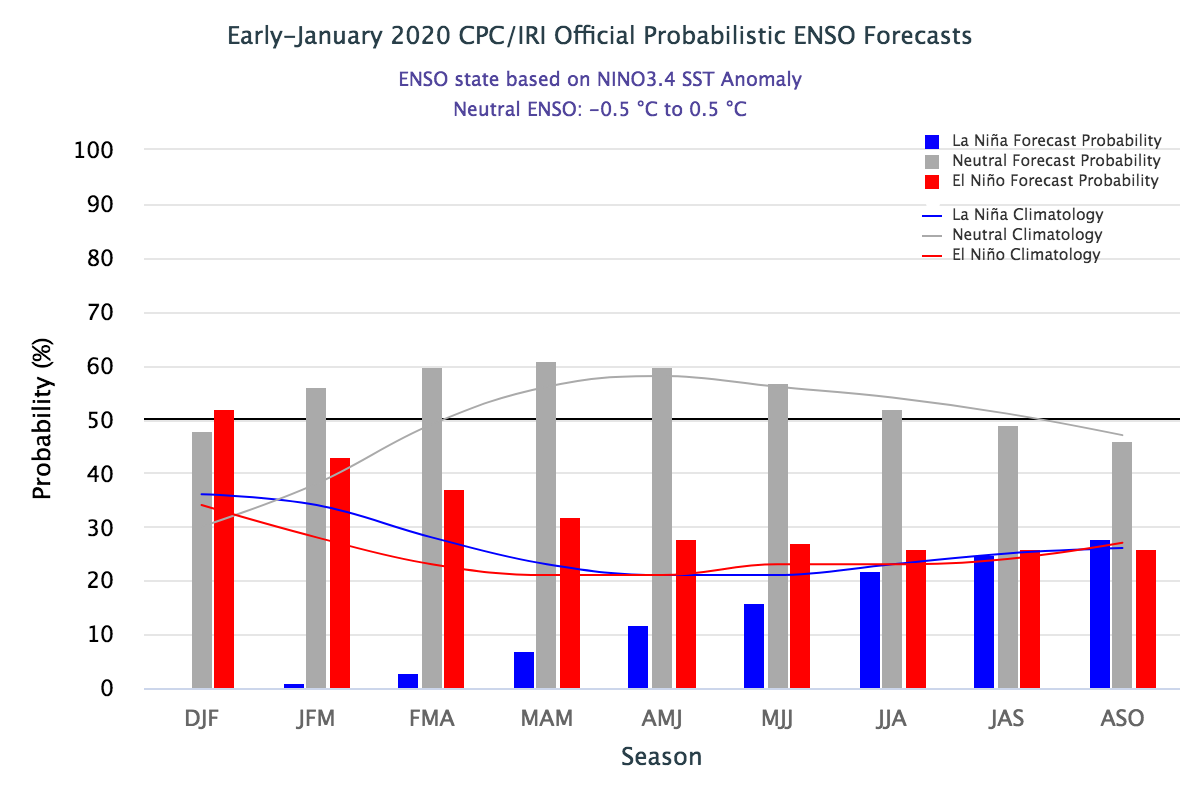