Eastern ENSO regions warmed up last week, I am sure because of the MJO.

NDG wrote:Eastern ENSO regions warmed up last week, I am sure because of the MJO.

A lot to do with it. There's also some downwelling beneath the eastern regions to keep Nino 3.4 in cool neutral territory. We're seeing cool-neutral prevail despite the trade bursts and I think it will continue until October. So not a good sign, as the ENSO state will continue to resemble 2005 and 2017.
2 likes
RIP Kobe Bryant
Top

The BoM just issued a La Nina Alert, meaning there is now a 70% chance of La Nina forming later this year.

La Niña ALERT—likelihood of La Niña in spring has increased

La Niña ALERT indicates the chance of La Niña forming in 2020 is around 70%—roughly three times the average likelihood.

ENSO indicators in the tropical Pacific Ocean are consistent with the early stages of La Niña development. Surface waters are cooler than average, while sub-surface temperatures have cooled further over the past fortnight.

In the atmosphere, trade winds are stronger than average, while the Southern Oscillation Index (SOI) remains neutral but positive. Equatorial cloudiness near the Date Line is also below average.

All international climate models surveyed suggest the tropical Pacific Ocean will cool further, with three of the eight models reaching La Niña thresholds in September, and two more in October.

The Indian Ocean Dipole (IOD) is currently neutral, despite the index dropping sharply in the last week. Large parts of the Indian Ocean are warmer than average, with some weak cool anomalies near the Horn of Africa. Half of the six surveyed models indicate negative IOD thresholds could be met or exceeded during spring.

Both La Niña and negative IOD typically increase the chance of above average rainfall across much of Australia during spring.

The Southern Annular Mode (SAM) is currently negative, but is expected to soon become weakly positive. At this time of year negative SAM is typically associated with above-average rainfall over southern Australia.

The Madden–Julian Oscillation (MJO) is in the eastern Pacific and is expected to continue eastwards towards Africa. At this time of year an MJO pulse in this region has little influence on rainfall over northern Australia.

subsurface heat content has decreased below its mid May minima, although a recent period of relaxed trades associated with the active phase of the MJO will likely prevent further cooling for a while. 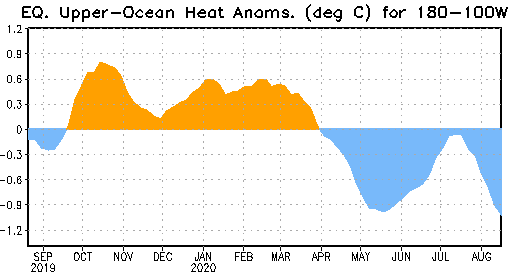 Cool down last week in most ENSO regions. 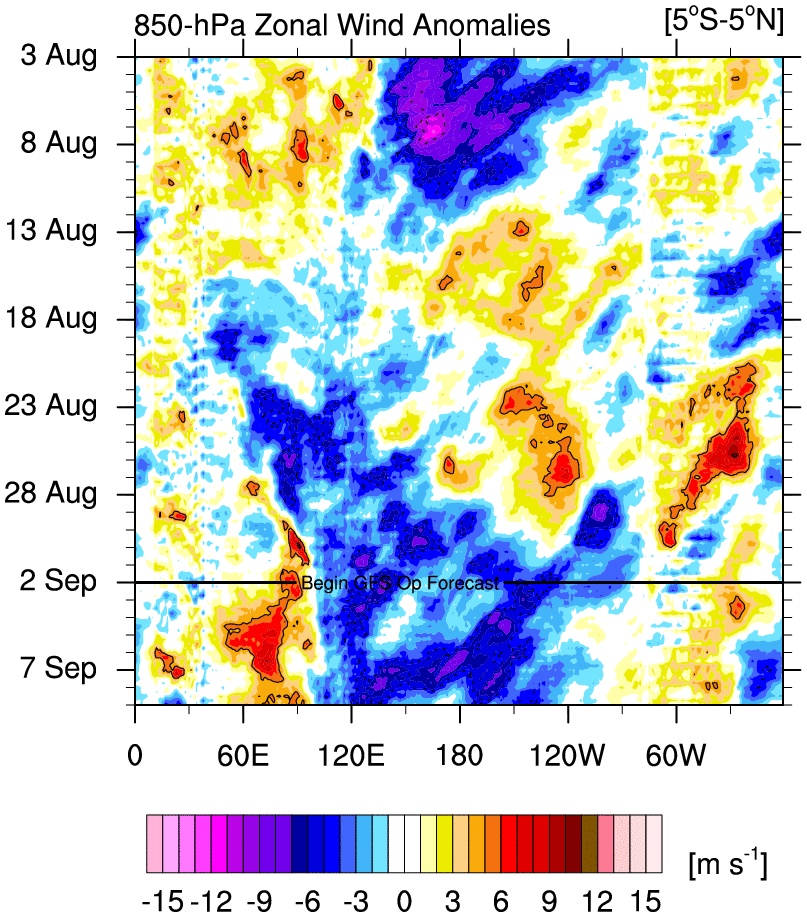 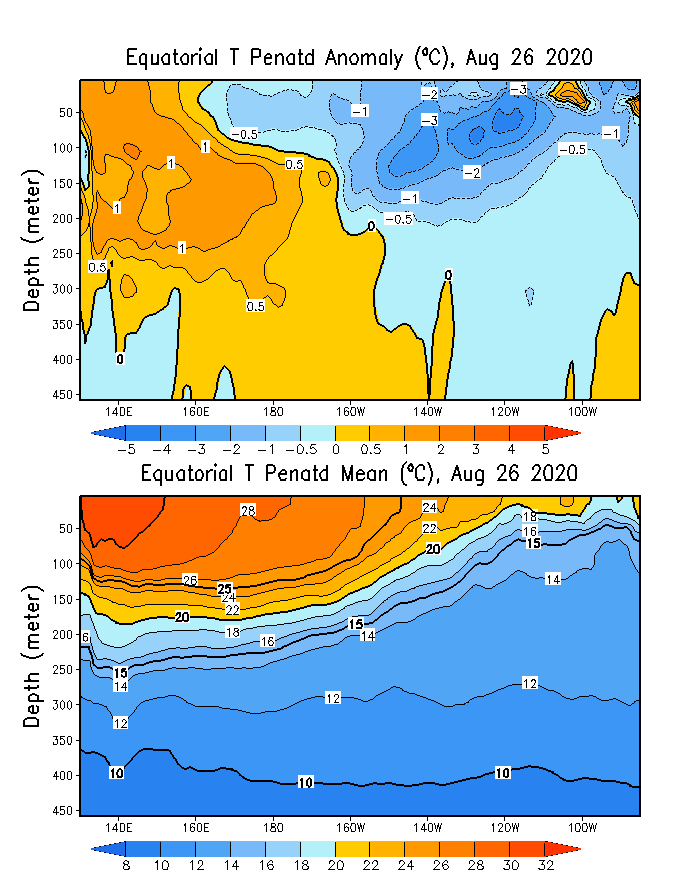 Atmosphere is still lagging behind the ocean for a true La Nina event, but CFS says that's about to change. Despite the successive trade burst all late Spring, Summer, and now into the Fall the low pressure bias still does not resemble a La Nina. Even the SOI is having trouble staying above the +10 mark. There should be a solid contour over the the MC (true indication of a La Nina) but it has not been able to materialize. Maybe that'll change soon. 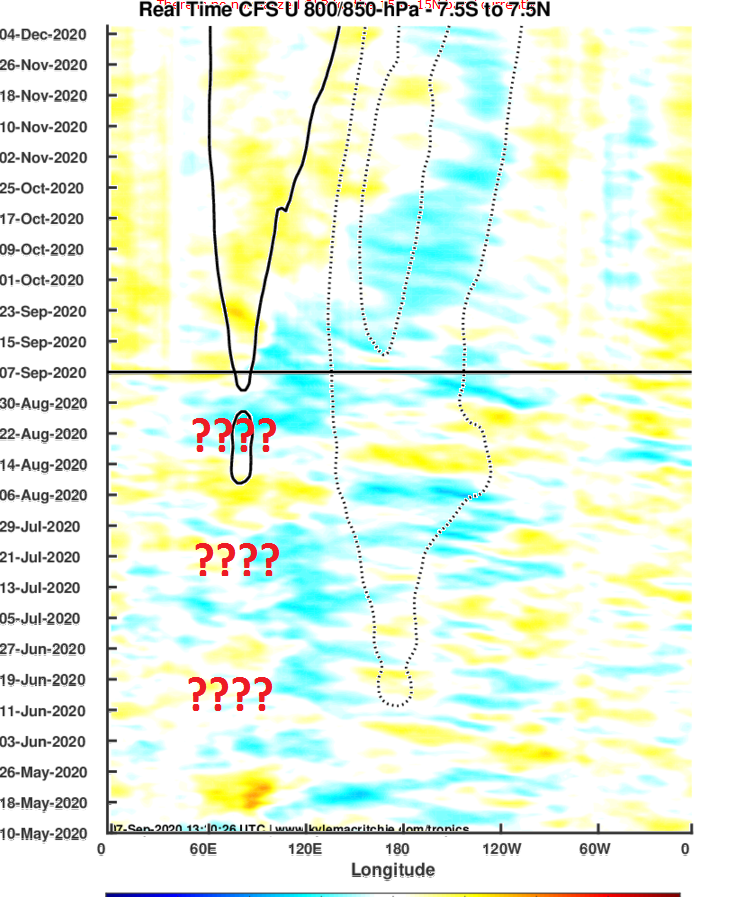 Perhaps explains why shear has persisted across the Atlantic MDR and Caribbean more so than many anticipated. Looks like Paulette and Rene will struggle to become intense hurricanes. Models suggest things might be different for eventual Sally (assuming no homebrew mischief spins up and steals that name in the next few days), but that remains to be seen.
1 likes
Top


Synopsis: La Niña conditions are present and are likely to continue through the Northern Hemisphere winter (~75% chance).

In August, La Niña conditions were present, with below-average sea surface temperatures (SSTs) extending across the central and eastern equatorial Pacific Ocean [Fig. 1]. In the last week, all Nino indices were negative, with the Nino-3.4 index at -0.9°C and the Nino-1+2 and Nino-3 indices cooler than -1.0°C [Fig. 2]. Equatorial subsurface temperature anomalies averaged across 180°-100°W were negative [Fig. 3], with the largest departures observed in the east-central Pacific from the surface to 200m depth [Fig. 4]. Atmospheric circulation anomalies over the tropical Pacific were also generally consistent with La Niña, despite sub-seasonal variability during the month. The low-level and upper-level winds were near average for the month as a whole, but enhanced low-level easterly winds were prominent across the equatorial Pacific Ocean during early and late August. Tropical convection remained suppressed over the western and central Pacific, and was near average over Indonesia [Fig. 5]. Both the Southern Oscillation and Equatorial Southern Oscillation indices were positive. Overall, the coupled ocean-atmosphere system was consistent with La Niña conditions.

A majority of the models in the IRI/CPC plume predict the continuation of La Nina (Niño-3.4 index less than -0.5°C) through the Northern Hemisphere winter 2020-21 [Fig. 6]. The forecaster consensus supports that view, and favors a borderline moderate event (Niño-3.4 index near -1.0°C) during the peak November-January season. In summary, La Niña conditions are present and are likely to continue through the Northern Hemisphere winter (~75% chance; click CPC/IRI consensus forecast for the chance of each outcome for each 3-month period). 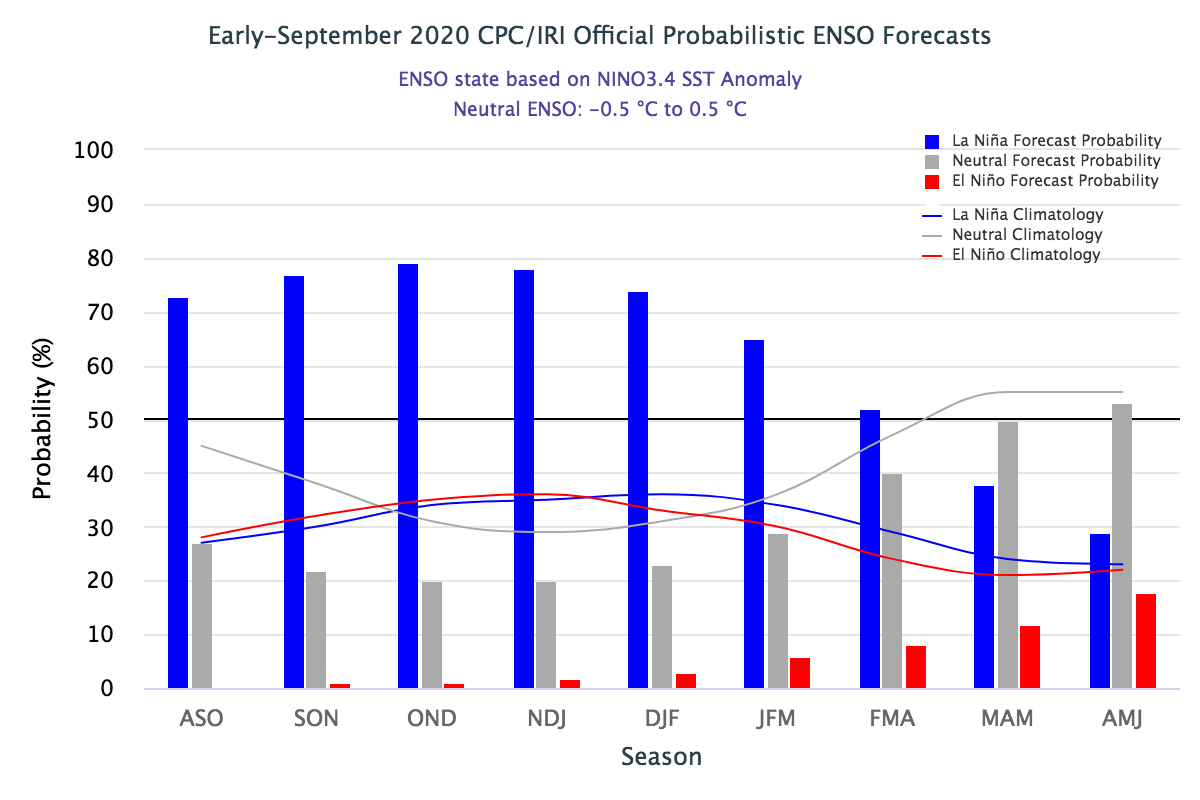 It looks like the long anticipated La Niña has arrived!

4 likes
The following post is NOT an official forecast and should not be used as such. It is just the opinion of the poster and may or may not be backed by sound meteorological data. It is NOT endorsed by storm2k.org.
Top

I think the ocean is there (La Nina) and the atmosphere will eventually resemble one. But during late winter 2019 and early spring 2020, the atmosphere also resembled an El Nino and the ocean supported it and the CPC refused to call it. We'll see in January what ONI says with the new update.
3 likes
RIP Kobe Bryant
Top

Long range CFS has backed off on its December dateline WWB and continues to show easterlies running the show. La Nina will likely continue into January 2021. Since 2014, there has been a strong WWB over the dateline during February. Key thing is to watch is for hints of an active MJO moving over the Pacific during December and January. If this fails to occur then a La Nina could again be likely for summer 2021.
8 likes
RIP Kobe Bryant
Top

La Niña continued during September, as evidenced by below-average sea surface temperatures (SSTs) extending from the Date Line to the eastern Pacific Ocean [Fig. 1]. The SST indices in the two westernmost Nino regions, Nino-4 and Nino-3.4, cooled throughout the month, and the Nino-3.4 index was -1.1°C in the past week [Fig. 2]. The equatorial subsurface temperature anomalies (averaged from 180°-100°W) remained substantially unchanged [Fig. 3], and continued to reflect below-average temperatures from the surface to 200m depth in the eastern Pacific Ocean [Fig. 4]. The atmospheric circulation anomalies over the tropical Pacific Ocean remained consistent with La Niña. Low-level wind anomalies were easterly across most of the tropical Pacific, and upper-level wind anomalies were westerly over the east-central Pacific. Tropical convection continued to be suppressed from the western Pacific to the Date Line, and a slight enhancement of convection emerged over Indonesia [Fig. 5]. Also, both the Southern Oscillation and Equatorial Southern Oscillation indices remained positive. Overall, the coupled ocean-atmosphere system indicates the continuation of La Niña.

A majority of the models in the IRI/CPC plume predict La Nina (Niño-3.4 index less than -0.5°C) to persist through the Northern Hemisphere winter 2020-21 and to weaken during the spring [Fig. 6]. The latest forecasts from several models, including the NCEP CFSv2, suggest the likelihood of a moderate or even strong La Nina (Niño-3.4 index values < -1.0°C) during the peak November-January season. The forecaster consensus supports that view in light of significant atmosphere-ocean coupling already in place. In summary, La Niña is likely to continue through the Northern Hemisphere winter 2020-21 (~85% chance) and into spring 2021 (~60% chance during February-April; click CPC/IRI consensus forecast for the chances in each 3-month period). 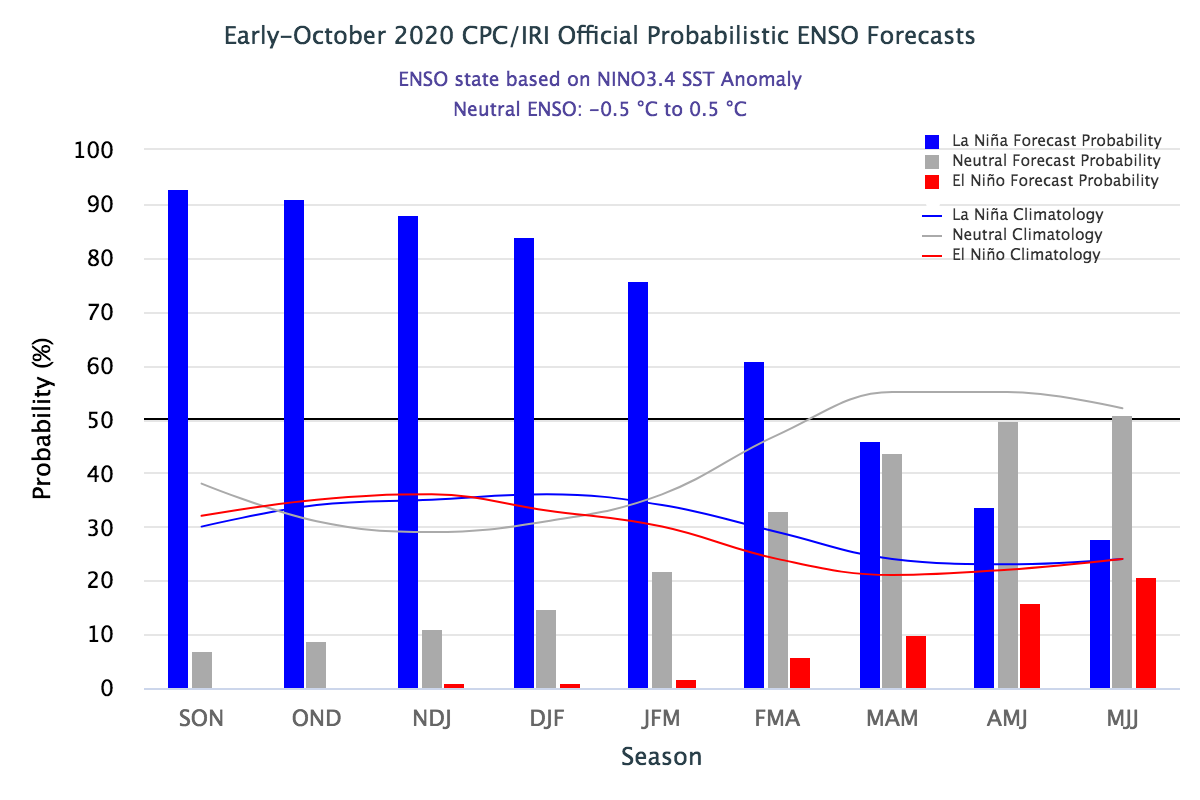 CFS is on crack 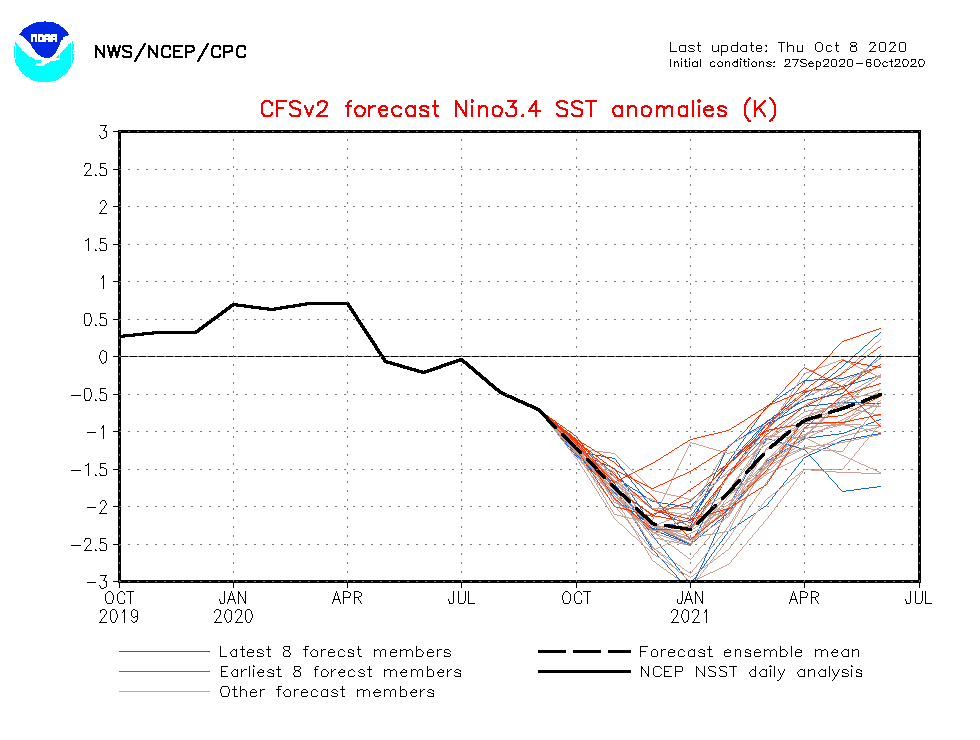 From the Enso Blog.

La Niña’s reign continues in the tropical Pacific, with an approximately 85% chance of lasting through the winter. Forecasters currently think this La Niña will be on the stronger side.

Do they think this La Niña could last into next summer/fall? We don't need a 6th active Atlantic season in a row... We've had enough storms to deal with the last 5 years
2 likes
I am in no way a professional. Take what I say with a grain of salt as I could be totally wrong. Please refer to the NHC for official information.
Top
Post Reply
11763 posts