In your opinion, what would it support? 90kt?
0 likes
Top

In your opinion, what would it support? 90kt?

Yes, primarily due to the SFMR.
0 likes
EPAC spreadsheet
Top

Should be onshore by 9-10z likely just east of the Guerrero-Michoacán border but there’s actually a warm spot now.
0 likes
EPAC spreadsheet
Top

Would be a major with 6-12 more hours no problem.
0 likes
EPAC spreadsheet
Top

Rick's satellite presentation has improved overnight with a warm
spot occasionally evident within the central dense overcast. An
Air Force Reserve Hurricane Hunter aircraft that provided two center
penetrations into the hurricane overnight measured peak 700-mb
flight-level winds of 96 kt, and SFMR surface winds of 85-89 kt.
Based on these data, the initial wind speed has been increased to
90 kt. Dropsonde data indicate that the minimum pressure is around
977 mb. With the center now very close to the coast of southern
Mexico, little change in strength is expected before Rick crosses
the coast within the next couple of hours. After landfall,
rapid weakening should occur while the cyclone moves over the
rugged terrain of southern Mexico, and the circulation is likely to
dissipate within 24-36 hours, if not sooner.

Satellite and aircraft fixes indicate that Rick is moving a little
faster just west of due north or 350/7 kt. A low-latitude
mid-level ridge to the east of Rick should steer the cyclone
northward to north-northwestward until dissipation occurs. This
motion will bring the center inland over southern Mexico by later
today. The dynamical model guidance is in good agreement although
most of the model trackers lose the system after 12 hours due to
dissipation of the low-level circulation. The updated NHC track
forecast is similar to the previous advisory and close to the
TCVN multi-model consensus aid.

1. Rick is forecast to make landfall along the southern coast
Mexico within the next couple of hours, bringing life-threatening
storm surge and dangerous hurricane-force winds to a portion of the
Hurricane Warning area.

2. Tropical storm conditions will continue within portions of the
Tropical Storm Warning areas through late today.

3. Heavy rains associated with Rick are expected to spread across
the Mexican states of Guerrero and Michoacan through tonight, and
could persist through Tuesday. This rainfall will likely produce
dangerous flash flooding and mudslides.

...RICK MAKES LANDFALL ALONG THE COAST OF MEXICO JUST EAST OF
LAZARO CARDENAS....

Satellite imagery indicates the center of Rick made landfall along
the coast of southern Mexico about 15 miles (25 km) east of Lazaro
Cardenas, Mexico with an estimated intensity of 105 mph (165 km/h).
The minimum central pressure estimated from earlier reconnaissance
aircraft data is 977 mb (28.85 inches).

From the 0900z Advisory: position marked with red circle 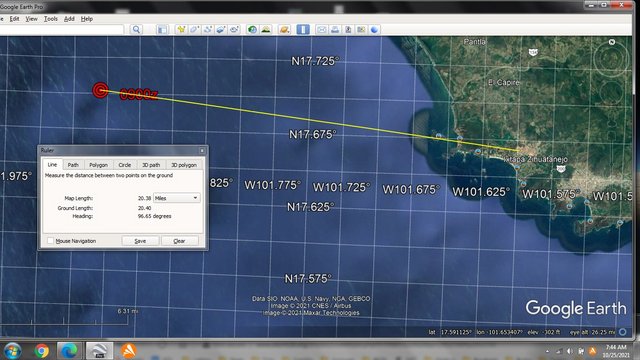 Would be a major with 6-12 more hours no problem.[/quote]

If it haven't been for dry air and mid level shear mostly due to la niña, this Olaf and Pamela are examples of hurricanes that could have been majors, still I expect great damage from this hurricane as a cat 2 in that region, this could be the deadliest hurricane of the season
0 likes
Top

friend sent me a message from zihuat--- heavy surf heavy rain and howling winds at playa principal. he lives almost on the beach, just up a cliff from the main beach of zihuat. no lights now.
i hope this does not hurt that lovely lil town and its people much. bay is south facing and open--could get ugly in there
2 likes
life is an adventure meant to be LIVED!!!

What is the strongest recorded landfall on Mexico’s Pacific coastline during La Niña?
1 likes
The posts in this forum are NOT official forecasts and should not be used as such. They are just the opinion of the poster and may or may not be backed by sound meteorological data. They are NOT endorsed by any professional institution or STORM2K. For official information, please refer to products from the NHC and NWS.
Top