They say the shear should decrease, but I'll believe it when I see it. Shear forecasts always seem difficult for some reason.
4 likes
Top

Convection has been so far removed for so long away from the admittedly vigorous LLC that I would not at all be shocked if Gabby here was downgraded to a post tropical low for a day or so. It barely meets the criterion for a TC. Obviously it is attempting to build convection but it's just not going to happen for a day or so.
0 likes
...but still, though, a lot more interesting than the 2013 season.

Probably won't last much longer, maybe 24h. Going over colder water--things don't often survive in this part of the Atlantic that aren't already fairly well put together in the first place.
0 likes
The above post is not official and should not be used as such. It is the opinion of the poster and may or may not be backed by sound meteorological data. It is not endorsed by any professional institution or storm2k.org. For official information, please refer to the NHC and NWS products.
---
My comics.
http://tba.cfw.me/
http://tbakids.cfw.me/
Top

It will be moving over relatively warmer waters for a bit in about 36-48 hours as it starts to recurve, but persistent dry air probably won't let it take advantage of that. Would be shocked if it managed to really regenerate itself at this point.
0 likes
...but still, though, a lot more interesting than the 2013 season.

It's gone. May have a chance to regenerate as it turns left going around the ULL, resulting in lower shear and higher SSTs. Still, it will need to deal with surrounding dry air 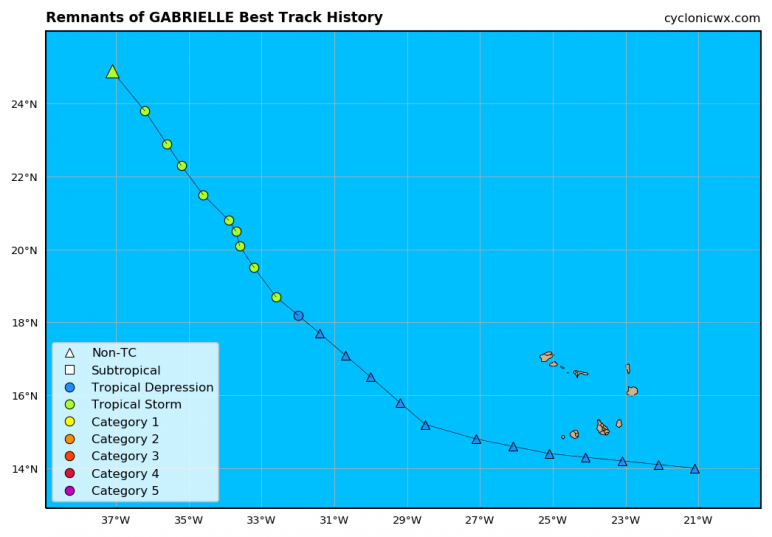 0 likes
This post was probably an opinion of mine, and in no way is official. Please refer to http://www.hurricanes.gov for official tropical analysis and advisories.

Poorly defined Gabrielle has not produced any organized deep
convection since Thursday morning, and what remains of the showers
and thunderstorms, is displaced nearly 200 miles north of the
elongated surface circulation. Consequently, Gabrielle can no
longer be classified as a tropical cyclone and has degenerated into
a 35 kt post-tropical cyclone.

Statistical-dynamical models, as well as the large-scale guidance,
show that strong shear, along with mid-tropospheric dry air
intrusion, should continue to inhibit convective development during
the next 24 h or so, and cause further weakening into a remnant
low. Around mid-period, the shear is forecast to decrease and the
upper wind pattern becomes more diffluent. Additionally,
Post-Tropical Cyclone Gabrielle will be traversing significantly
warmer oceanic sea surface temperatures. As a result, the cyclone
is forecast to redevelop organized deep convection, and more than
likely, re-strengthen. In fact, some of the intensity guidance
shows Gabrielle becoming a hurricane in 4 days before transitioning
into an extratropical cyclone at the end of the period. The NHC
intensity forecast is based on a blend of the HFIP HCCA, and the
deterministic guidance beyond day 3.

The initial motion is estimated to be an accelerating northwestward
motion, or 315/10 kt. The global and regional models are in rather
good agreement that the post-tropical cyclone will gradually turn
toward the west-northwest during the next 48 hours, before recurving
northward and then northeastward early next week in response to an
approaching major shortwave mid-latitude trough from the northwest.
The official forecast track is just a little to the left of the
previous one, and is very close to the TVCA simple multi-model
guidance.

An area of low pressure, the remnants of Gabrielle, is producing
an area of showers and thunderstorms to the north of its center.
Although upper-level winds are not particularly favorable for
re-development of this system at this time, conditions are expected
to become increasingly conducive for regeneration, and the low is
likely to become a tropical storm again within the next day or so.
* Formation chance through 48 hours...high...80 percent.
* Formation chance through 5 days...high...80 percent.
0 likes
Visit the Caribbean-Central America Weather Thread where you can find at first post web cams,radars
and observations from Caribbean basin members Click Here
Top

Free ACE and only ships have to worry about it.
1 likes
Top

WOW, that was fast!

Sorry Jed, but I'm rooting for this one.

Didn't even skip an advisory before regeneration.
2 likes
My posts are my own personal opinion, defer to the National Hurricane Center (NHC) and other NOAA products for decision making during hurricane season.
Top

Interesting parts of the discussion:

Although Gabrielle was without organized deep convection for most of the past 24 hours, deep convection has quickly re-developed near and to the north of the center this morning. In addition, recent ASCAT data indicate that the winds have increased since last night, suggesting that tropical-cyclone intensification processes are ongoing. While normally we would wait a little longer to restart the cyclone, since the previous advisory and this one show the potential for significant strengthening, advisories are being re-initiated so that marine warnings that were already in place could remain. The initial intensity is set to 40 kt, in agreement with the ASCAT winds.

The new NHC prediction is increased at long-range as much as continuity allows and is still below many of the model forecasts.
2 likes
Top

This is the fastest I have ever seen a TC regenerate.
4 likes
NCSU meteorology student and weather blogger at www.cyclonicfury.com. My forecasts and thoughts are NOT official, for official forecasts please consult the National Hurricane Center.
Top

Time to bring this out again 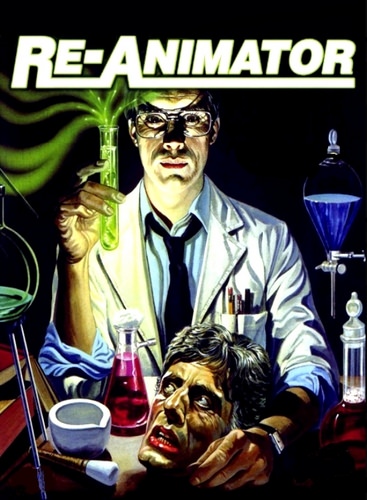 5 likes
This post was probably an opinion of mine, and in no way is official. Please refer to http://www.hurricanes.gov for official tropical analysis and advisories.

Wow that was very quick. I first thought it remained a TS during the night.

Is 6 hours the quickest regeneration we seen? I wonder if it’ll remain a TS in post-season analysis.
2 likes
I don't get hurricanes here but I do get their remnants.
Top

galaxy401 wrote:Wow that was very quick. I first thought it remained a TS during the night.

Is 6 hours the quickest regeneration we seen? I wonder if it’ll remain a TS in post-season analysis.

I think they might have it become a remnant low sooner, around 18z or 00z, with the regeneration at 12z today.
1 likes
NCSU meteorology student and weather blogger at www.cyclonicfury.com. My forecasts and thoughts are NOT official, for official forecasts please consult the National Hurricane Center.
Top