The latest model runs are in good agreement that a tropical cyclone could develop in the southern part of the Mediterranean Sea in the middle / second part of the next week. Most of the main models are predict a weak or moderate TS now (GFS: top left, ECM: top right, ICON: bottom left), but there are some more bullish ones, like the Swiss (bottom right). 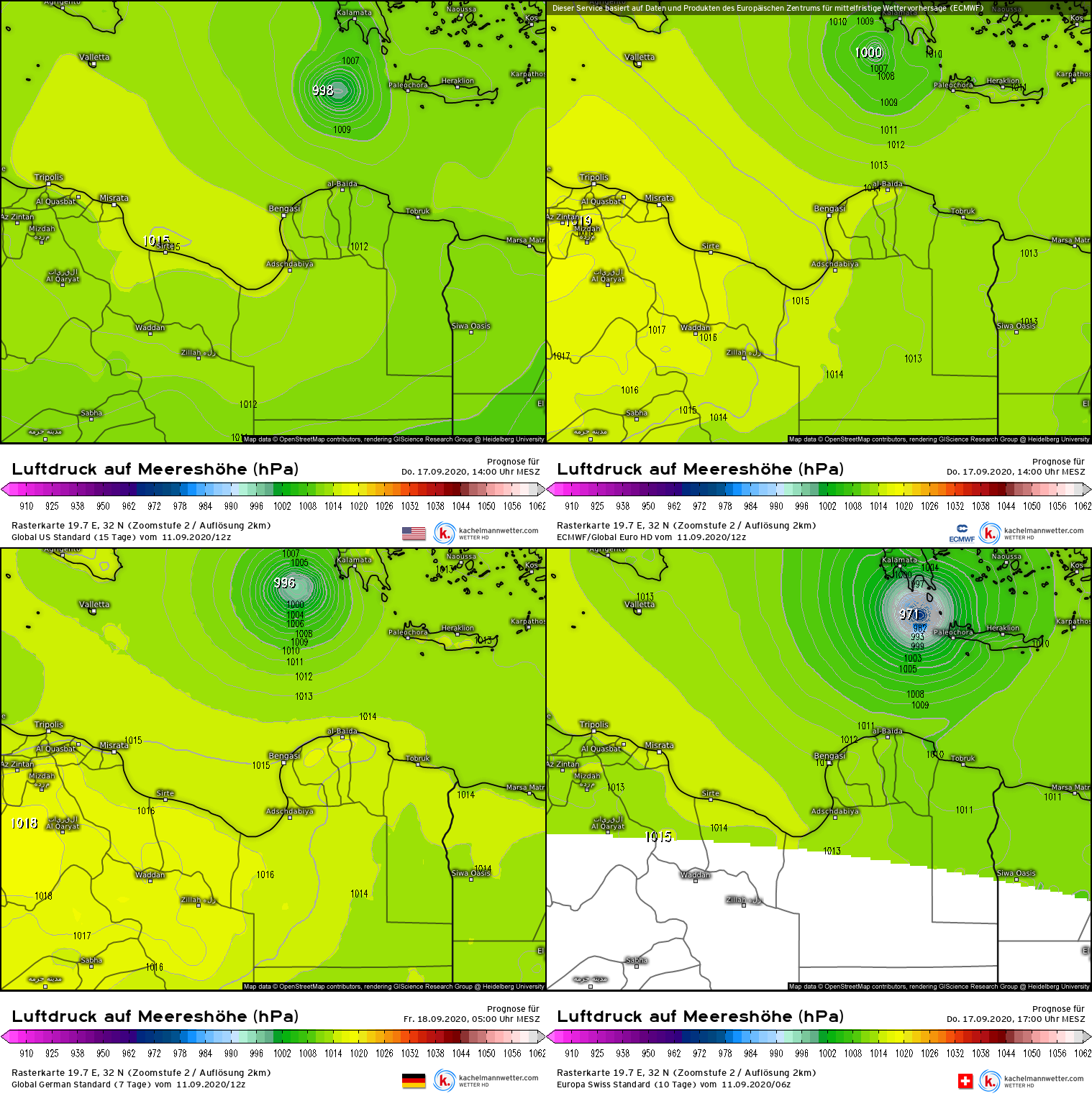 The development will be associated with an upper level low that currently located over Sardinia. Beneath this feature there is also a weak surface low and the system has an appearance of a subtropical depression, but it never became really organized and will be dissipating soon as a surface anticyclone expands toward that region from north.

A cluster of thunderstorms with some mid-level spin formed south of Italy in the last hours, but the developing surface low is expect to be much south of it, along the Libyan coast tomorrow and on Tuesday. However, the latest model runs took back from the development and only predict a depression or weak storm as it will move toward NE or ENE on Wednesday and Thursday (but the 00Z Swiss still showed a Cat 1 hurricane 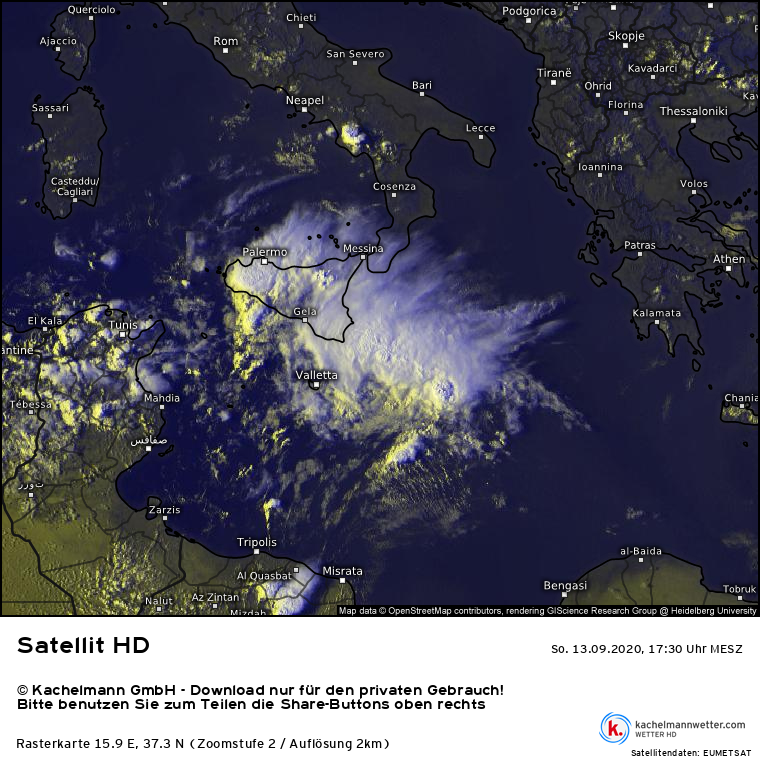 Vortex areas appear to be forming south of Sicily, but as mentioned by Vince_and_Grace_fan the depression should be further south:

In the last few hours convection started to develop closer to the weak low level center which is NNE of Sirte (according to the low level clouds motion - some part of it now under the Cirrus canopy).
The upper level wind field will be favorable tomorrow as the cyclone will be under a divergent areas between two part of a splitting jet, however a part of the jet will arrive over the Gulf of Sirte on Wednesday. So if the cyclone remain weak and move to easterly direction the increasing shear will inhibit the further development, but if it consolidate fast tomorrow and start to move northeastward, it will remain under a weaker shear conditions and could strengthen furter. The latest run of ICON show the latter option and strengthen the cyclone into hurricane. 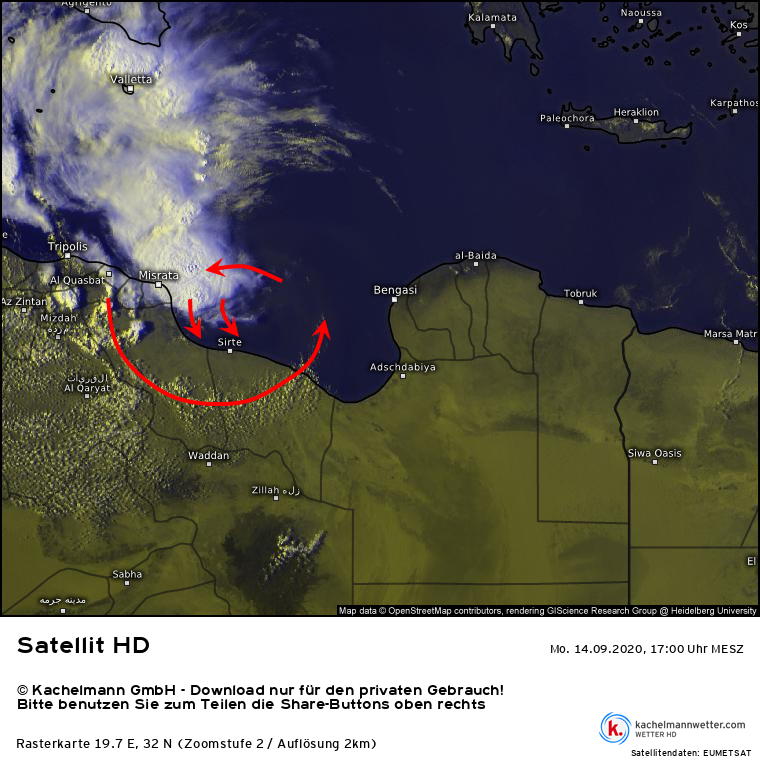 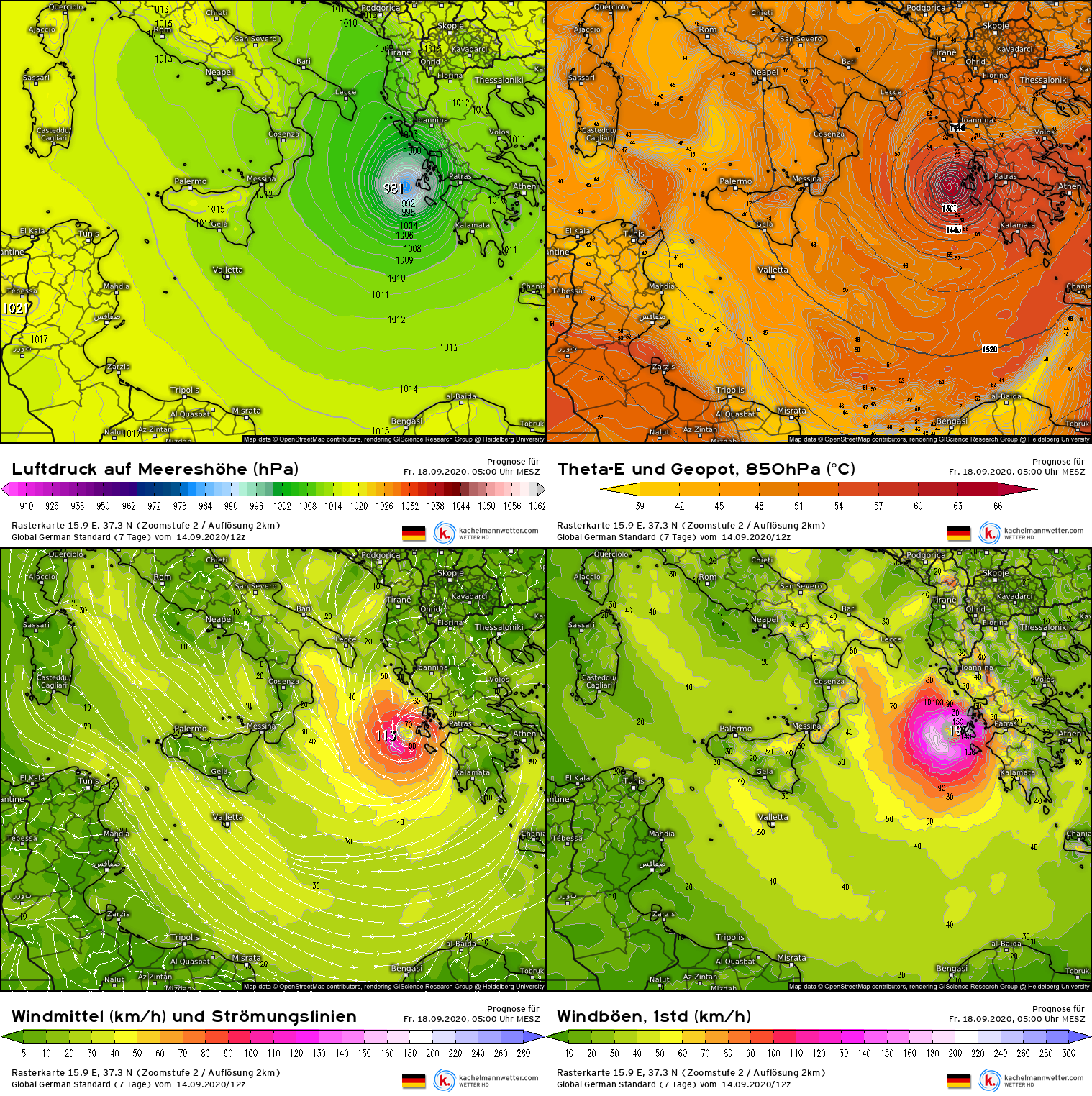 Convection consolidating with some sign of spin, and the upper level outflow also looks good. It may become a depression tomorrow.

The convection weakened during the second half of the night but the center became well-defined (N of Misrata), so the cyclone likely a tropical depression or a weak tropical storm now (an ASCAT pass yesterday evening showed 35 kt wind on the west side, but the circulation still was elongated at that time).

Vince_and_Grace_fan wrote:The convection weakened during the second half of the night but the center became well-defined (N of Misrata), so the cyclone likely a tropical depression or a weak tropical storm now (an ASCAT pass yesterday evening showed 35 kt wind on the west side, but the circulation still was elongated at that time).

Storm is mentioned as "Cassilda" now on (Social) Media Channels now.
2 likes
The only thing we really get for free is the weather...
Top

DanieleItalyRm wrote:This note by an utent is correct? "No tropical. Moreover, if you notice well there is still a little bit of baroclinicity to be able to define it in all respects as tropical".

Most of the tropical cyclones at higes latitudes have some baroclinic influence, for example cut-off upper level low or trough which stretching southward from the westerlies often cause upper level divergence under a tropical cylcone.
In this case the upper level low that formerly located NW of the cyclone helped the convective systems in the past days and maybe also contributed to the formation of the weak surface low yesterday, but it never had fronts and the circulation became concentrated while sustained depp convection occured in the night hours, and in addition, upper level outflow also developed over the cyclone. So it is more like tropical than extratropical or subtropical.
3 likes
Top

ICON goes absolutely crazy with its latest run. Deepens to 979 mbar and has wind gusts up to 273 kmh (170 mph, 147 kts) and 130 kmh (81 mph, 70 kts) sustained winds near landfall. I think this might be a bit too extreme, but even if anything resembling this verifies it would be record breaking and would pose a huge risk to the islands and coast. 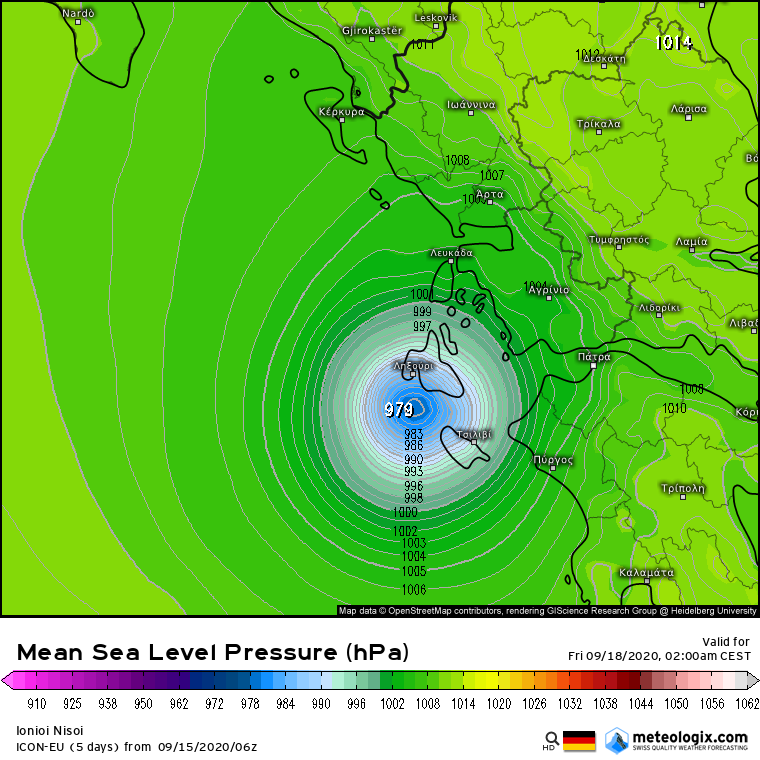 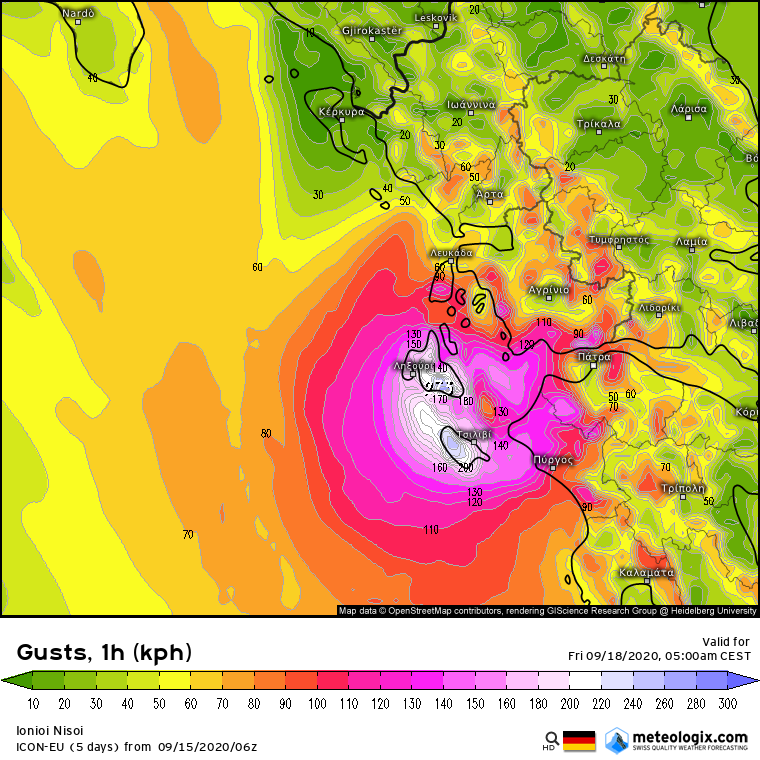 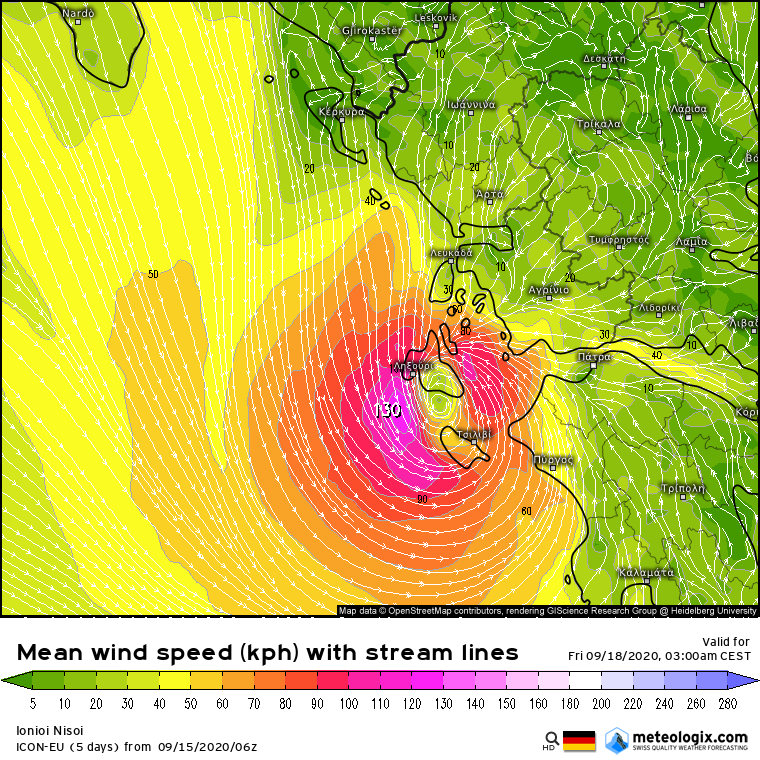 No doubt a TC which is also supported by a recent ASCAT pass. 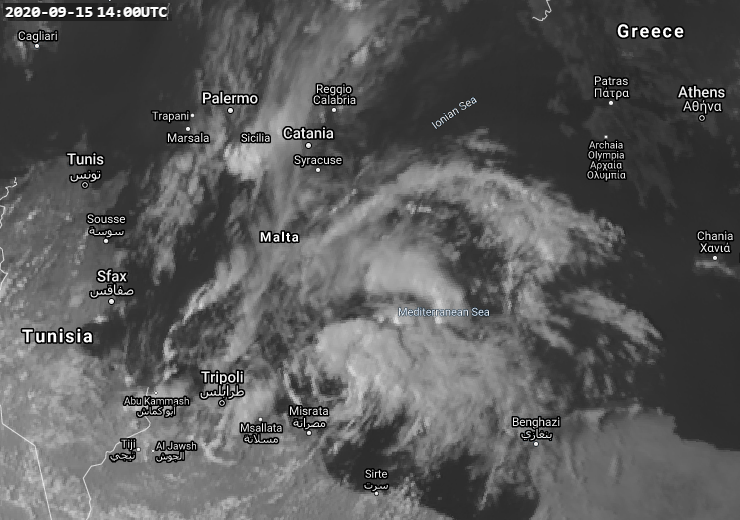 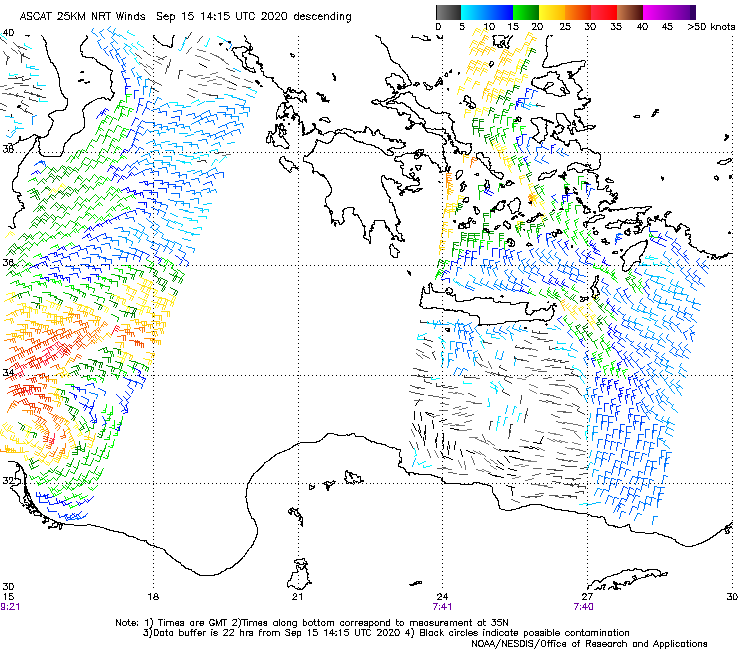 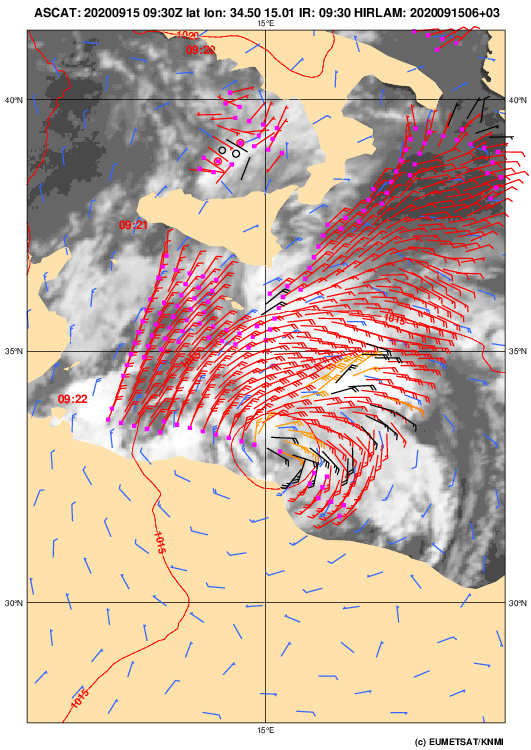 A hurricane striking Greece would be unprecedented right? I know we've seen some weak tropical storms form over the past couple years but nothing close to what the ICON us showing
2 likes
Noel '07, Kyle '08, Earl '10, Arthur '14, Dorian '19
Top

cainjamin wrote:A hurricane striking Greece would be unprecedented right? I know we've seen some weak tropical storms form over the past couple years but nothing close to what the ICON us showing

Zorbas in 2018 was near hurricane strength when made landfall at Kalamata (it developed an eye-like feature and sations reported 988-989 hPa pressure near the center, but the available wind data did not support the hurricane intensity as the 10-min sustained windw were mostly around 40-45 kt and only one station measured hurricane-force 65 kt gust). But if this cyclone develop as fast as the ICON show, it indeed could became stronger than Zorbas.
1 likes
Top

After a brief convective hiatus earlier today, in the last hours a symmetrical, expanding cluster of thunderstorms developed on the NE side of the tiny LLC with cloud tops around -60, -65 Celsius. Due to the small size of the cyclone, it possibly reach tropical storm strength in these hours and could strengthening fast if the convection sustain and conditions remain favorable.

CyclonicFury wrote:Can't say I have ever seen this in a UKMET text product before

Imran_doomhaMwx wrote:No doubt a TC which is also supported by a recent ASCAT pass.
https://i.imgur.com/AYtUV3E.png

The latest ASCAT pass confirmed the strengthening and show some vectors between 35-40 kt, so this is probably a 40 kt TS right now (and based on this, I renamed the title, please someone do with this with the topic's headline). The deep convection sustain from the large burst late afternoon, but it seems that the LLC still locates on the southern edge of it. 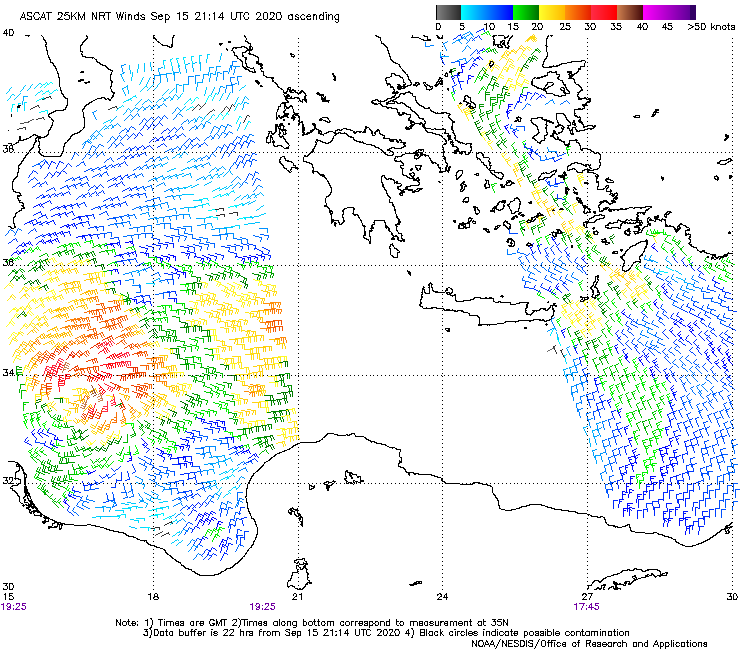 I don't understand why there is no agency responsible for issuing warnings on these. There's been plenty of research showing that the basin is capable of producing infrequent subtropical or even fully tropical cyclones.
0 likes
Top

A few NWP models (e.g. IFS and ICONEU) suggest the development of a low-level cyclone under the blob of deep convection in the Libyan Sea during Tue 15/09 and early morning on Wed 16/09. By the time of issuing this outlook (Mon 14/09, 20z), no visible near-surface vortex exists in the Gulf of Sidra. In addition, there is no strong mid/upper-level vorticity in the analysis maps to support the development of a strong surface cyclone and eventually support these NWP model scenarios that deep convection will be able to diabatically intensify this cyclone by generating large values of low-level PV. Even though a tropical transition of a cyclone is very unlikely to happen by the end of this outlook, this interesting set-up needs to be monitored closely for the following 48 hours.
0 likes
Leben, was ist das?
Top

Where does the name Cassilda come from?
0 likes
Top
Post Reply
137 posts