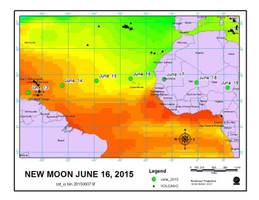 This month the lunar sub-point for the New Moon is over the Atlantic. This part of the Atlantic is geologically active.
0 likes
Top 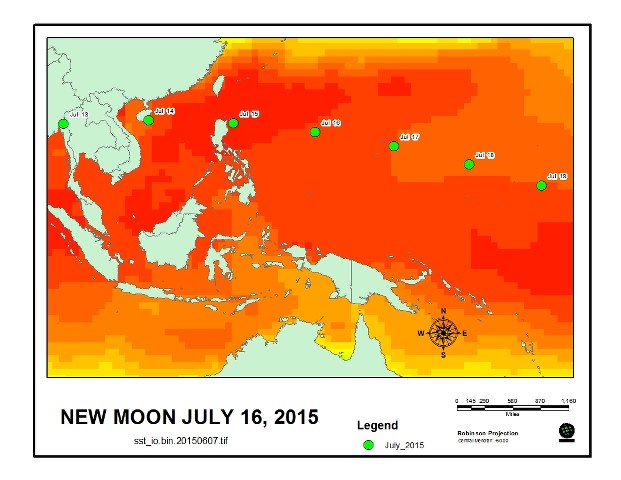 This is the second time this year the New Moon is near this meridian. It will be interesting to see the effect on the SOI. Geologically active area this pass are the Northern Philippines and Guam.
0 likes
Top

Gigabit, did you see this video from NASA?

I thought it was interesting how you can see a storm in the EPAC during the transit. I'm not saying I buy into the theory, just figured you'd be interested in the video.

L1 is a better place to invest. Now that the 3 lens solar battery has been perfected the projected rate of return on the proposed power satellite has been improved. We just need some real-estate. The hollow earth, where are the Koreshan's when you need them. 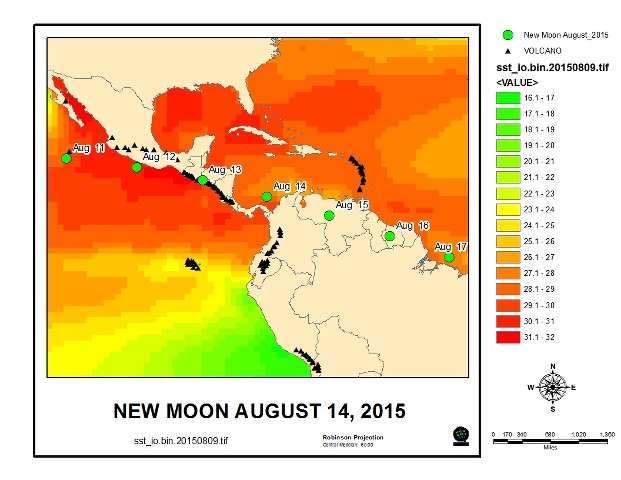 This month the New Moon path is over land for the most part. Crossing over a volcanic region of Central America. The last day of the phase is north of the equator.
0 likes
Top 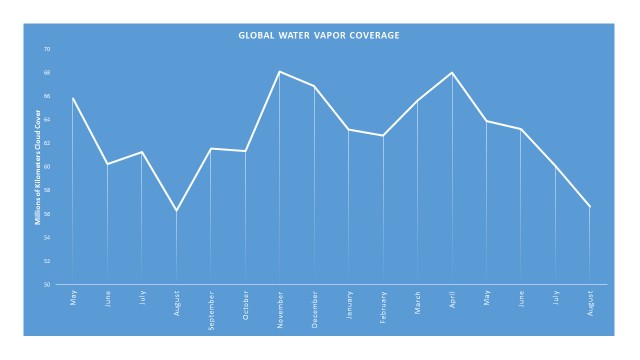 This is a plot of global water vapor over the last year as derived from a polygon count of the most intense 20% of the range of the NRL Stitched Global Water Vapor image on the day of the New Moon near 18:00 UTC. It is a 3% study of monthly water vapor. It seems that the August measurement shows the least amount of dense cloud cover for the year. This seems reasonable in that the northern hemisphere has the most land area and the least evaporable water area.
0 likes
Top 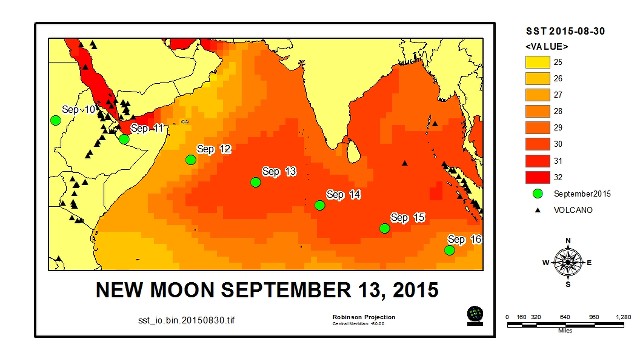 This is the path of the New Moon’s progression in September. This is an area of considerable seismic and volcanic activity. The North Indian Ocean has had tropical storm formation in September, but it is not common.
0 likes
Top

What is the current projection date for the latest new moon?
0 likes
Remember, all of my post aren't official. For official warnings and discussions, Please refer to your local NWS products...

NWS for the Western Pacific

I look at the Sun Moon alignment near the New Moon not the occultation. I calculate the force, although 09L formed at the New Moon the sub-point was to far away and the mass of the storm was two small for there to be an interaction visible on the GEO 1km IR image. The next pass will be:

Venus and Jupiter have about 1% of the moon’s pull, so that is almost 2 percent total more pull. More pull is generally contraindicative for earthquakes & the moon is far enough south that it isn't likely that there will be a pass close to a northern hemisphere cyclone to catch an interaction. 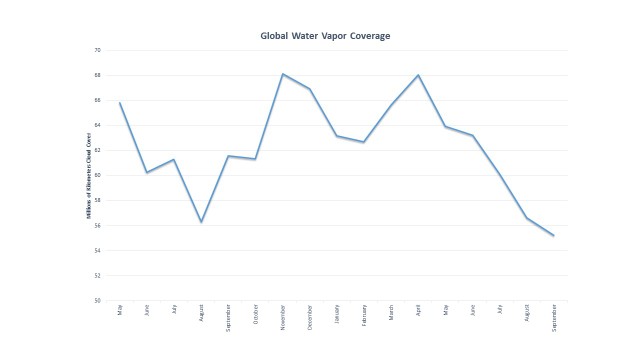 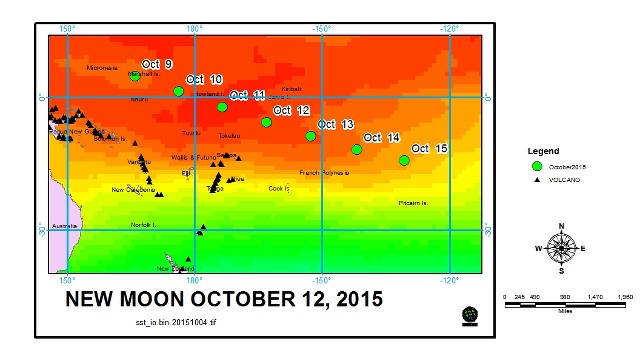 The New Moon for October is passing just east of Australia. It is fall, so the New Moon is south of the equator.
0 likes
Top 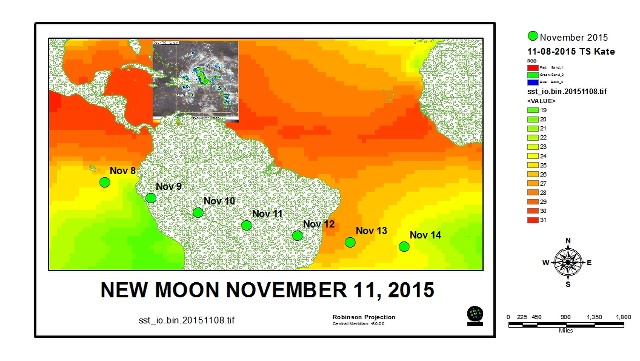 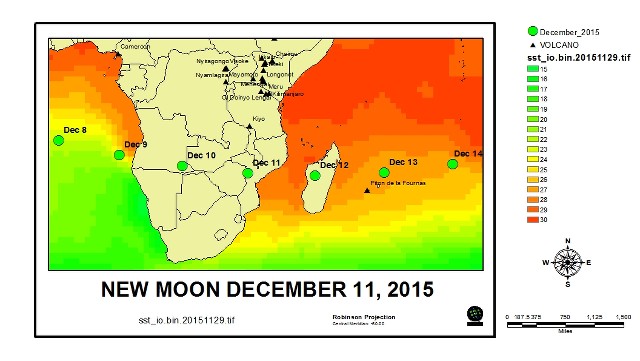 The New Moon in December passes over South Africa, a geologically stable region. The water in the South Atlantic is cool. The South Pacific water below the pass is above 26° Celsius.
0 likes
Top 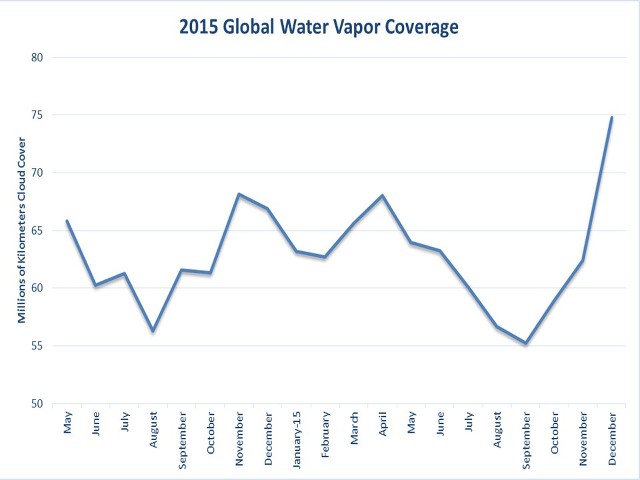 The change in global water vapor from the NRL stitched water vapor image
at (or near ) the new moon seems trendy. The last conversion of the image to a
polygon shapefile shows a distinctive increase in the amount of water vapor coverage
for December 2015 it is a 12 percent increase over December 2014. With the December
data the year over year vapor trend is flat to diminished.
0 likes
Top 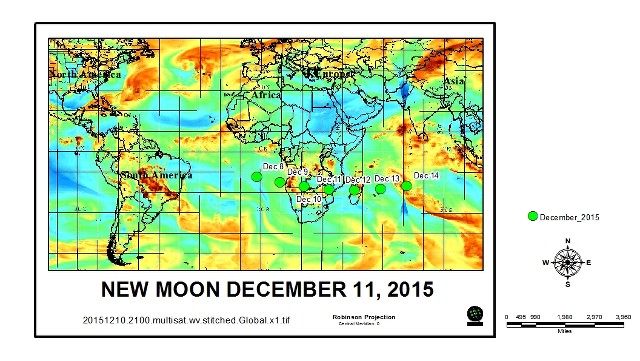 This is the December 2015 global water vapor image with the new moon overlay.
0 likes
Top

Are There More Storms or Can We Just See Storms Better? 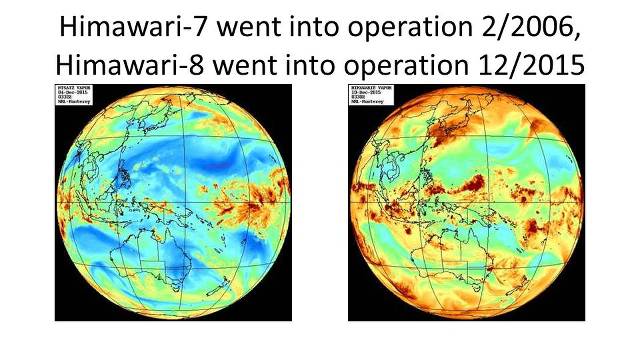 What a difference a decade makes.
The image above is a comparison of water vapor satellite imagery. The left image is from Himawari-7 captured December 4, 2015. The right image is from the new system Himawari-8. It was captured December 10, 2015. There are several upgrades to the new system. The system has more spectral bands. The number of visible bands has increased from 1 to 3 providing a true color image. The number of near infrared to infrared bands have been increased from 4 to 13. The Himawari-8 also has higher spatial resolution. The resolution of the visible and infrared channels have been quadrupled. The number of images per day have been increased from 24 to 144 for the full disk and 576 for target areas.

I'm not so sure that there isn't another mechanism involved. The increase in global water vapor always seems to increase in December. This year the change is notably strong. That strength could be attributed to the closeness to the sun on New Years
0 likes
Top 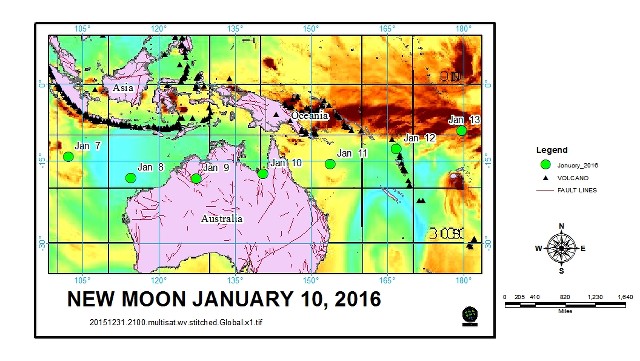 This month the New Moon is passing over Australia. I've included the stitched water vapor image from NRL
instead of the sea surface temperature raster because I want to compare the first quarter water vapor
measurement with the New Moon pixel count. 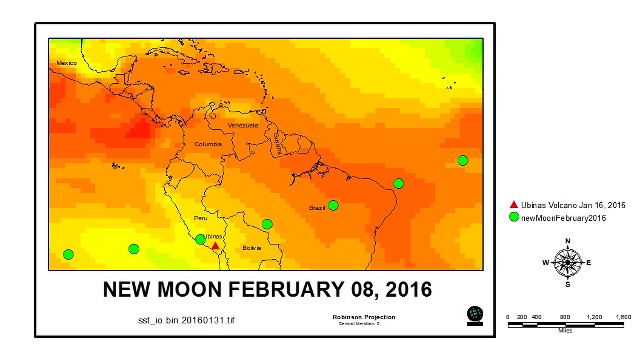 This looks alot like November 2015. It is a little higher on the continent. There is nothing shaking with apogee until October and November. The Ubinas Volcano has had some sporadic activity lately.

This is a google earth file. It any one can down load it and open in in Google Earth. If you right click on the file on the sidebar in Google Earth and open the properties and click on the icon just right of Name you can resize the Moon Icon.
https://www.dropbox.com/s/38h5871tvbq21 ... 1.kmz?dl=0
0 likes
Top 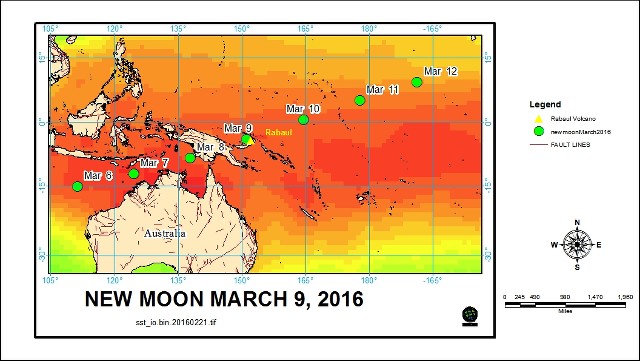 * Almost spring and the New Moon crosses the equator. This crossing sometimes accentuates earthquake activity as the moon's path crosses the Clipperton Fracture zone.
* There is plenty of warm water to accelerate evaporation
* The mass of water vapor north of Australia may be large enough for an interaction
* Also the Rabaul Volcano has been active recently

This is a google earth file. It any one can down load it and open in in Google Earth. If you right click on the file on the sidebar in Google Earth and open the properties and click on the icon just right of Name you can resize the Moon Icon.
https://www.dropbox.com/s/jtpk477mjjezf ... 6.kmz?dl=0
0 likes
Top 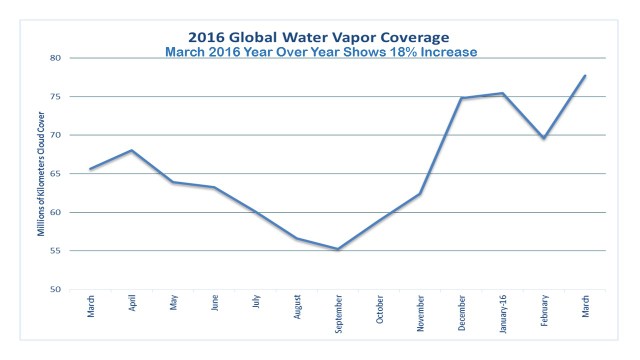 The uptick in global water vapor seems inevitable to me if there is global warming the surface area of evaporable
water has to increase. Last year there was more global water vapor in April than in March. This is not a cumulative
scale, it is 3% sample, sectioned at the New Moon alignment 18:00 utc (noon central standard time).
0 likes
Top
Post Reply
161 posts