Bonnie looks to have missed its chance to be upgraded to TS status again(though I personally think it peaked at 45-50kts sometime in the past 12hrs. or so).
0 likes
The following post is NOT an official forecast and should not be used as such. It is just the opinion of the poster and may or may not be backed by sound meteorological data. It is NOT endorsed by storm2k.org.
Top

TheStormExpert wrote:Bonnie looks to have missed its chance to be upgraded to TS status again(though I personally think it peaked at 45-50kts sometime in the past 12hrs. or so).

They for sure will go back after season is over to do the analysis.
0 likes
Visit the Caribbean-Central America Weather Thread where you can find at first post web cams,radars
and observations from Caribbean basin members Click Here
Top

Another blowup of convection firing.

Some 35kt winds on the latest ASCAT pass. Looks like a small tropical storm.
0 likes
Top

Yeah. It'll be adjusted in the TCR.
0 likes
Top

Looking at the ASCAT pass from earlier and the new blow up of convection, I'd lean towards it being a TS again at 21z. We will see what happens.
0 likes
Top

Bonnie is about the size of Connecticut.

Satellite wind data indicate that the maximum sustained winds have
increased to near 40 mph (65 km/h) with higher gusts. Some
weakening is forecast during the next 48 hours, and Bonnie is
forecast to degenerate to a post-tropical low by Saturday.

Tropical-storm-force winds extend outward up to 35 miles (55 km)
mainly to the southeast of the center.

Somewhat unexpectedly, the convection associated with Bonnie has
increased this afternoon to the point where the satellite intensity
estimate from TAFB is now 35 kt. In addition, an ASCAT-B overpass
near 1400 UTC showed several 35-kt vectors about 30 n mi southeast
of the center. Based on these data, Bonnie is again designated as
a tropical storm with an initial intensity of 35 kt.

The initial motion is now 090/11. Bonnie should move generally
eastward to east-southeastward between the subtropical ridge to the
south and a developing baroclinic low to the northeast. The model
guidance has shifted a little southward since the last advisory,
and the new forecast track is nudged southward as well.

The current intensification is likely to be short lived, as Bonnie
will be moving over sea surface temperatures colder than 24C in
about 12 hours. Thus, the intensity forecast calls for weakening
through the forecast period, with Bonnie degenerating to a
post-tropical low between 12 and 24 hours. The low should
subsequently weaken to a trough between 48 and 72 hours.

This storm looks a lot like TD1 in 2009. Looks similar and in the same location, almost the same time of the year too. 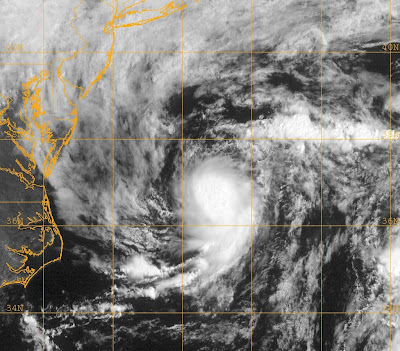 0 likes
I don't get hurricanes here but I do get their remnants.
Top

Maximum sustained winds are near 40 mph (65 km/h) with higher gusts.
Some weakening is forecast during the next 48 hours, and Bonnie is
forecast to degenerate to a remnant low by Saturday.

Tropical-storm-force winds extend outward up to 35 miles (55 km)
from the center.

After the burst of deep convection noted earlier today,
thunderstorm activity associated with Bonnie has diminished
considerably with the only remaining convection occurring over a
small area in the southeast quadrant of the circulation. The
maximum wind speed is kept at 35 kt in agreement with a Dvorak
Current Intensity number from TAFB. Given the current lack of deep
convection, this intensity estimate may be generous. Since the
system will be traversing cool waters of near 22 deg C and vertical
shear is forecast to increase to near 30 kt over the next 24-48
hours, Bonnie is predicted to gradually weaken and soon become a
remnant low. Global models show the cyclone becoming absorbed by
another low over the north Atlantic in 48 to 72 hours.

The initial motion estimate is 090/10. Bonnie is moving along the
northern side of a subtropical ridge and the southern edge of the
mid-latitude westerlies, and this steering regime should continue
for the next couple of days. The track model guidance is in
general agreement on a continued eastward motion with some
acceleration over the next 48 hours. The official track forecast
is a blend of the latest GFS and ECMWF output and similar to the
previous NHC track.

Deep convection had essentially vanished, but a new puff of
thunderstorms redeveloped east of the center during the last few
hours. The low-level circulation remains exposed west of the
convective mass due to strong northwesterly vertical wind shear. An
earlier ASCAT pass showed reliable 33-kt winds when the cyclone was
devoid of convection. It is assumed that, with the new convective
burst, tropical-storm-force winds still likely exist. Thus, the
initial wind speed estimate is held at 35 kt. A further increase in
shear and Bonnie's movement over 22 deg C water should cause the
cyclone to degenerate into a remnant low by 24 hours. Global models
show Bonnie opening up into a trough by 48 hours, with its remnants
absorbed by a frontal zone over the central North Atlantic soon
after that. The new NHC intensity forecast is in good agreement
with the previous one and the latest statistical-dynamical guidance.

The initial motion estimate is 090/10. Bonnie continues to be
carried eastward along the southern edge of a nearly zonal flow
over the western Atlantic. The track model guidance shows Bonnie
moving just south of due east with additional acceleration prior to
dissipation. The NHC track forecast is adjusted a bit southward and
is slightly slower than the previous forecast, following the
multi-model consensus.

...BONNIE WEAKENS TO A TROPICAL DEPRESSION...

Maximum sustained winds have decreased to near 35 mph (55 km/h) with
higher gusts. Bonnie is forecast to degenerate into a remnant low
by tonight.

Bonnie appears to be weakening. The small burst of deep convection
that occurred overnight has been shrinking, and the system is
now devoid of significant thunderstorm activity. Based on the
degraded structure of the system, the initial wind speed has been
lowered to 30 kt, making Bonnie a tropical depression once again.
The depression is over cold water and in a high wind shear
environment. Since these environmental conditions are not expected
to change, Bonnie is forecast to degenerate into a remnant low
by tonight. The remnant low will likely open into a trough within
the next couple of days.

The small cyclone is moving eastward at about 12 kt in the
mid-latitude westerlies. An eastward to east-southeastward motion
at a slightly faster forward speed is expected until Bonnie
dissipates. Little change was made to the previous track prediction,
and the official forecast lies close to a consensus of the GFS and
ECMWF models.

...BONNIE WEAKENS TO A TROPICAL DEPRESSION...

Bonnie has lacked significant deep convection for several hours, and
the compact cyclone mainly consists of a swirl of low-level clouds.
An ASCAT pass from earlier today showed winds near 30 kt in the
southeast quadrant of the circulation, and the initial intensity
is held at that value. Strong wind shear, dry air, and cold waters
should prevent the return of significant thunderstorm activity, and
Bonnie will likely degenerate into a remnant low tonight. Most of
the models show the remnant low dissipating late Sunday or Monday.

The depression has been moving east-southeastward, 110 degrees, at
about 12 kt within the mid-latitude westerlies. A general eastward
to east-southeastward motion with a slight increase in forward
speed is expected until Bonnie dissipates. The official track
forecast is nudged a little to the south of the previous one, to
account for the more southerly initial position and motion, and
lies close to the middle of the guidance envelope.

Bonnie has lacked organized deep convection since early this
morning and is basically only a swirl of low clouds. Thus, the
cyclone no longer meets the definition of a tropical cyclone and
has become a post-tropical remnant low. Maximum winds are set to
30 kt. These winds should gradually weaken while the circulation
opens up into a trough over the next day or so. Model guidance is
in good agreement on this system moving east-southeastward until
the low decays into a trough late Sunday or early Monday.

This is the last advisory on Bonnie. Additional information on this
system can be found in High Seas Forecasts issued by the National
Weather Service...under AWIPS header NFDHSFAT1 and WMO header
FZNT01 KWBC.

Well I suppose there was a reason why Wxman didn't do Bones the first time around.

0 likes
I don't get hurricanes here but I do get their remnants.
Top
Post Reply
620 posts