ABIO10 PGTW 061800
MSGID/GENADMIN/JOINT TYPHOON WRNCEN PEARL HARBOR HI//
SUBJ/SIGNIFICANT TROPICAL WEATHER ADVISORY FOR THE INDIAN
/OCEAN/061800Z-071800ZFEB2017//
TROPICAL DISTURBANCE SUMMARY:
(1) AN AREA OF CONVECTION (INVEST 93S) HAS PERSISTED NEAR
17.9S 122.9E, APPROXIMATELY 40 NM EAST OF BROOME, AUSTRALIA.
ANIMATED ENHANCED INFRARED SATELLITE IMAGERY AND A 061336Z MHS METOP-
A 89 GHZ MICROWAVE IMAGE LACK A WELL DEFINED LOW LEVEL CIRCULATION
BUT DISPLAY FLARING CONVECTION THROUGHOUT THE INVEST AREA WHICH IS
CURRENTLY ASSESSED TO BE OVER LAND. THE DISTURBANCE IS CURRENTLY
LOCATED IN A MARGINAL ENVIRONMENT DUE TO MODERATE (15-20 KTS)
VERTICAL WIND SHEAR AND POOR UPPER LEVEL OUTFLOW. OBSERVATIONS FROM
BROOME REVEAL A 5MB PRESSURE FALL OVER THE PAST 24 HOURS, INDICATING
SIGNIFICANT DEEPENING OF THE DISTURBANCE. GLOBAL MODELS ARE IN GOOD
AGREEMENT ANTICIPATING A SOUTHWEST TRACK WITH DEVELOPMENT OVER WATER
WITHIN THE NEXT 24-48 HRS. MAXIMUM SUSTAINED SURFACE WINDS ARE
ESTIMATED AT 20 TO 25 KNOTS. MINIMUM SEA LEVEL PRESSURE IS ESTIMATED
TO BE NEAR 994 MB. THE POTENTIAL FOR THE DEVELOPMENT OF A
SIGNIFICANT TROPICAL CYCLONE WITHIN THE NEXT 24 HOURS IS MEDIUM.
(2) NO OTHER SUSPECT AREAS.//

Latest ASCAT has a well-defined LLC, heavy convection, and winds to 35 kts across the northern part of the storm. BoM is not issuing any advisories.
0 likes
Top

Australia BoM is determined not to recognize it. They give it only a "low" chance of "development" over the next 3 days. Reminds me of Hurricane Catarina offshore Brazil in 2004. Brazil met office said "we don't get hurricanes and we're not having one now!" Ok, it's a 988mb non-TC offshore NW Australia.
0 likes
Top

I don't understand what BOM has been thinking at all this year. Bizarre 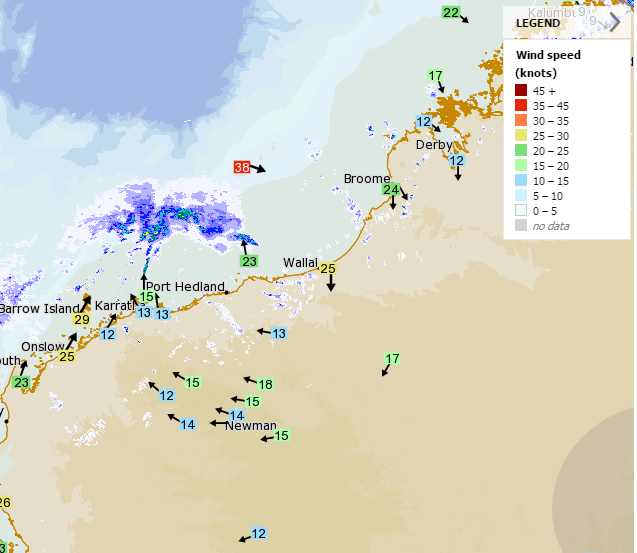 It's at least a gale-force tropical low... but JTWC and BOM are nowhere to be seen
0 likes
Top

There was a full on cane a few seasons ago in the Joseph Bonaparte Gulf, from memory it went unnoticed as well even with
solid radar and nrl microwave support.
0 likes
Top

JTWC has at least thrown up a TCFA.

WTXS21 PGTW 072130
MSGID/GENADMIN/JOINT TYPHOON WRNCEN PEARL HARBOR HI//
SUBJ/TROPICAL CYCLONE FORMATION ALERT//
RMKS/
1. FORMATION OF A SIGNIFICANT TROPICAL CYCLONE IS POSSIBLE WITHIN
175 NM EITHER SIDE OF A LINE FROM 18.4S 119.6E TO 23.8S 115.0E
WITHIN THE NEXT 12 TO 24 HOURS. AVAILABLE DATA DOES NOT JUSTIFY
ISSUANCE OF NUMBERED TROPICAL CYCLONE WARNINGS AT THIS TIME.
WINDS IN THE AREA ARE ESTIMATED TO BE 30 TO 35 KNOTS. METSAT
IMAGERY AT 072100Z INDICATES THAT A CIRCULATION CENTER IS LOCATED
NEAR 19.2S 118.9E. THE SYSTEM IS MOVING SOUTHWESTWARD AT 08
KNOTS.
2. REMARKS: THE AREA OF CONVECTION (INVEST 93S) PREVIOUSLY LOCATED
NEAR 17.9S 122.9E, IS NOW LOCATED NEAR 19.2S 118.9E, APPROXIMATELY
70 NM NORTH-NORTHEAST OF PORT HEDLAND, AUSTRALIA. ANIMATED ENHANCED
INFRARED SATELLITE IMAGERY DEPICTS A MONSOON DEPRESSION CIRCULATION
WITH DEEP CONVECTION ALONG THE WESTERN PERIPHERY OF THE LOW LEVEL
CIRCULATION CENTER (LLCC). A 071926Z GPM 89GHZ MICROWAVE IMAGE
REVEALS THAT THE CONVECTION HAS STARTED TO WRAP INTO THE OVERALL
CIRCULATION. A 071410Z ASCAT BULLSEYE SHOWED A LARGE WEAK CORE OF
WINDS (10-15 KNOTS) SURROUNDED BY STRONG SURGE WINDS NOT ASSOCIATED
DIRECTLY WITH THE TROPICAL SYSTEM WRAPPING AROUND THE NORTHERN SIDE.
OBSERVATIONS FROM ROWLEY SHOALS (100NM TO THE NORTH) HAVE CONFIRMED
THE SURGE WINDS RANGING FROM 35 TO 45 KNOTS. ADDITIONALLY, A
SOUTHERLY SURGE OF 30 TO 35 KNOTS ALONG THE WEST COAST OF AUSTRALIA
IS HELPING ROUND OFF THE BROAD CIRCULATION. THE SYSTEM IS LOCATED IN
A HOSTILE ENVIRONMENT WITH VERY STRONG (40+ KNOTS) VERTICAL WIND
SHEAR (VWS) PREVENTING THE CONVECTION FROM CONSOLIDATING OVER THE
CENTER. HOWEVER, VWS IS LOWER (15-20 KNOTS) OVER NORTHWESTERN
AUSTRALIA AND THERE IS A ROBUST UPPER LEVEL OUTFLOW. GLOBAL MODELS
SHOW THE SYSTEM MAKING LANDFALL WITHIN 12-24 HOURS ON A
SOUTHWESTWARD TRACK. EXPECT MODERATE TO STRONG GALE FORCE WINDS
ALONG THE NORTHERN SIDE OF THE CIRCULATION AS THE DISTURBANCE MAKES
LANDFALL. MAXIMUM SUSTAINED SURFACE WINDS ARE ESTIMATED AT 30 TO 35
KNOTS. MINIMUM SEA LEVEL PRESSURE IS ESTIMATED TO BE NEAR 989 MB.
THE POTENTIAL FOR THE DEVELOPMENT OF A SIGNIFICANT TROPICAL CYCLONE
WITHIN THE NEXT 24 HOURS IS HIGH.
3. THIS ALERT WILL BE REISSUED, UPGRADED TO WARNING OR CANCELLED BY
082130Z.//
NNNN
0 likes
Wayward meteorology student on a journey back to the promised land.

Looks a bit elongated but no doubts in my mind is a TS.

GFS did well on this phantom this system.
0 likes
Top

and the unrecognized tropical storm is moving inland
0 likes
Top

SEVERE WEATHER WARNING
for DAMAGING WINDS, HEAVY RAINFALL and DAMAGING SURF
For people in the
Pilbara and parts of the
Gascoyne districts.
Issued at 3:43 pm Wednesday, 8 February 2017.
Weather situation:
At 3pm AWST, the tropical low lies over land 70km southeast of Port Hedland. The low is expected to move towards the southwest through the inland Pilbara overnight Wednesday and during Thursday. Late Thursday or early Friday the low will likely move offshore in the vicinity of Carnarvon or Shark Bay.
Windy conditions are expected throughout the Pilbara and northern Gascoyne. DAMAGING WIND GUSTS to 100 kilometres per hour which could result in DAMAGE TO HOMES AND PROPERTY are possible east of Port Hedland Wednesday afternoon and evening. As the low tracks towards the southwest over land the winds should ease. As the low moves offshore late Thursday a period of DAMAGING WINDS is possible between Cape Cuvier and Denham, including Carnarvon.
Areas of HEAVY RAINFALL that may lead to FLASH FLOODING are possible over the Pilbara and far northwest Gascoyne as the low moves across the district. Isolated daily rainfall totals in excess of 100mm are possible in coastal parts of the Pilbara.
There are Flood Watches and Warnings current for the Kimberley and Pilbara districts. For further details please refer to http://www.bom.gov.au/wa/warnings/.
Currently the tides along the west coast are lower than normal. As the low moves offshore overnight Thursday or early Friday tides may rapidly rise to be higher than normal and surf conditions could be dangerous.
Locations which may be affected include Carnarvon, Coral Bay, Denham, Exmouth, Karratha, Onslow, Paraburdoo, Port Hedland, Tom Price, Nullagine, Overlander Roadhouse, Whim Creek and Wooramel Roadhouse.
This overall weather pattern is unusual for this time of year and severe weather may occur in some parts of the warning area.
Between 3:00pm and 3:40pm Karratha recorded 39.8mm of rainfall.
The Department of Fire and Emergency Services advises that people should:
* If outside find safe shelter away from trees, power lines, storm water drains and streams.
* Close your curtains and blinds, and stay inside away from windows.
* Unplug electrical appliances and do not use land line telephones if there is lightning.
* If boating, swimming or surfing leave the water.
* Be alert and watch for hazards on the road such as fallen power lines and loose debris.
* Keep away from flooded drains, rivers, streams and waterways.
* Be careful of fallen trees, damaged buildings and debris.
* Be careful of fallen power lines. They are dangerous and should always be treated as live.
* Assess your home, car and property for damage.
* If damage has occurred take photos and contact your insurance company to organise permanent repairs.
* If your home or property has significant damage, like a badly damaged roof or flooding, call the SES on 132 500.