SFLcane wrote:Afternoon euro does nothing with this potential tc keeps it as a minimal sheared ts into the open atlantic.

It doesnt seem to do anything with anything out there now. wow. that's pretty remarkable at how utterly quiet that run is. Make me wonder what's up.

? The 12z ECMWF is one of the more active runs I've seen this season. 06L stays weak; two systems behind 06L, one of which becomes a hurricane as it moves west, and a TD in the GOMEX by day five.
0 likes
My posts are my own personal opinion, defer to the National Hurricane Center (NHC) and other NOAA products for decision making during hurricane season.
Top

gatorcane wrote:We are talking long-range but once again there are some GFS ensembles bringing this all the way west getting blocked by a ridge. Check out the circle east of Florida heading west. Chances appear low, but I would prefer to see no GFS ensembles. 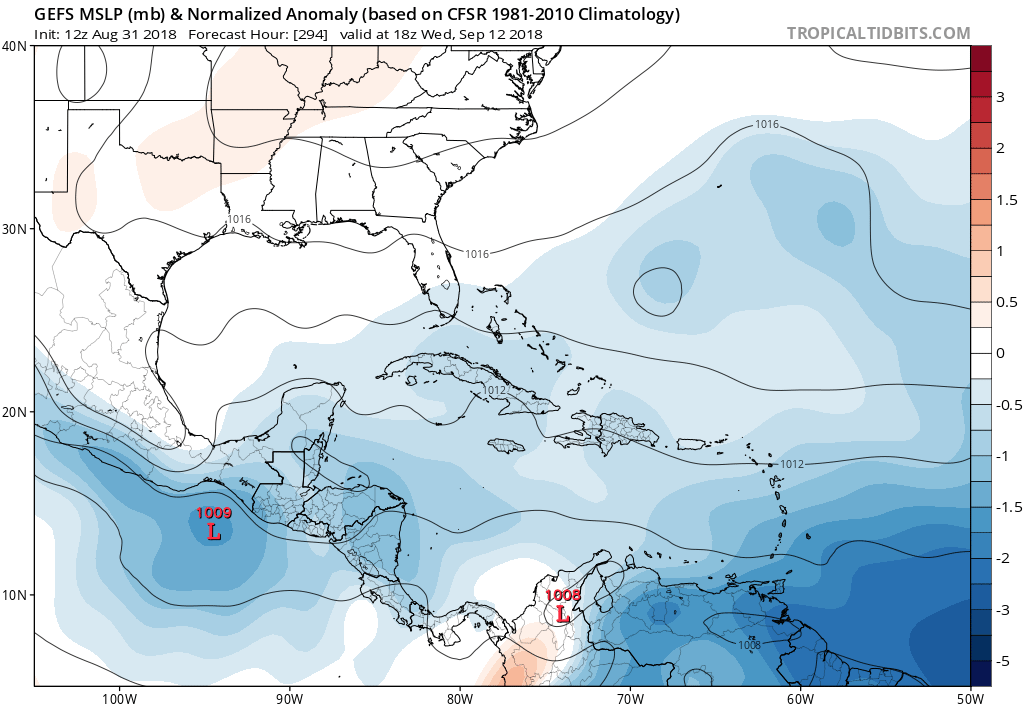 This is the image I was referring to when I said it looks like its showing nothing. I realize now that there are other things potentially coming behind it. Just nothing other than that little weak circle well east of the Bahamas shown here. .
0 likes
Top

The 18zGFS seems to at the 500 level show the weakness closing up at 96 hrs, the trend with Thant is not a good one but we’ll have to see
0 likes
Top

The ECMWF has gone way westward in the 00z run: 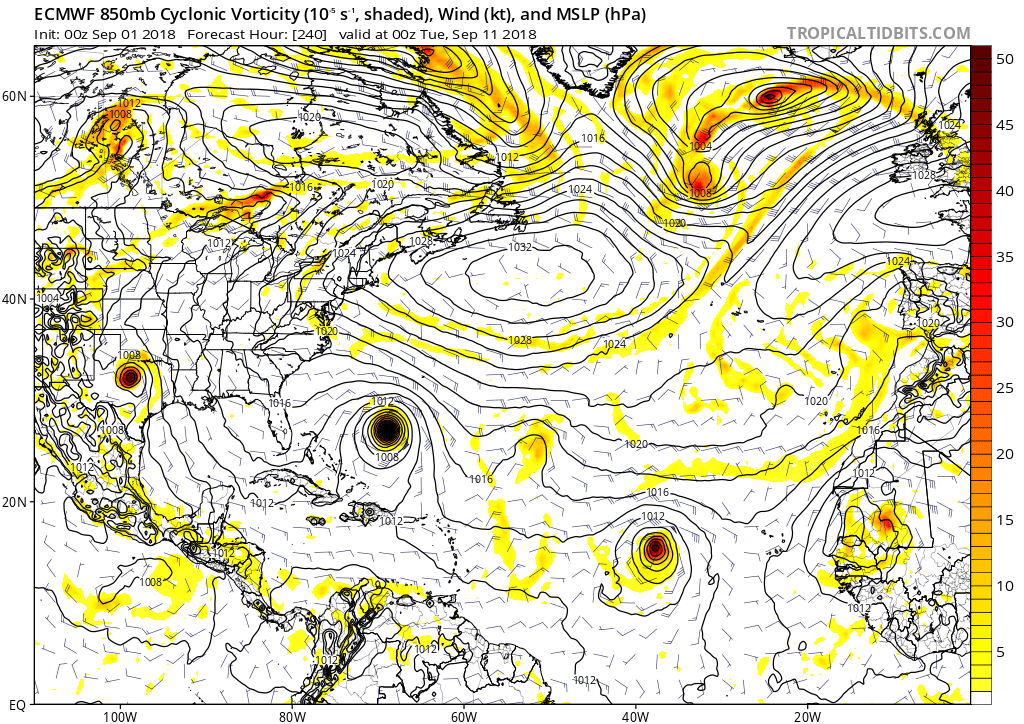 Tonight's EURO 0Z run is Epic and I don't mean in a good way. Big Westward shift for Florence. At least at 216 hr., the storm is looking like it's practically locked into a CONUS landfall.
0 likes
Personal Forecast Disclaimer:
The posts in this forum are NOT official forecast and should not be used as such. They are just the opinion of the poster and may or may not be backed by sound meteorological data. They are NOT endorsed by any professional institution or storm2k.org. For official information, please refer to the NHC and NWS products.

240 hours out, but this would not be a good setup for recurve: 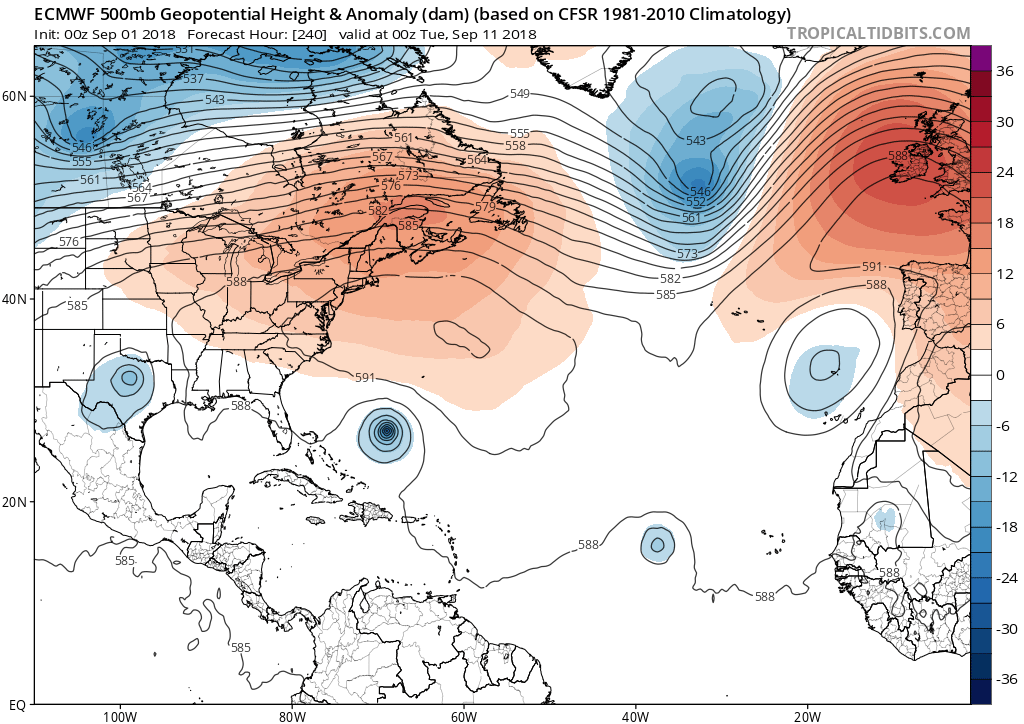 chaser1 wrote:Tonight's EURO 0Z run is Epic and I don't mean in a good way. Big Westward shift for FloAndrew. At least at 216 hr., the storm is looking like it's practically locked into a CONUS landfall.

So...let's talk about what the 240hr 500mb pattern shows, I could careless about the surface reflections this far out. What it shows is a blocking pattern showing up. That ridge will be in place for days. That pattern should be very scary to meteorologists. Basically says thrown anything in there. It makes it home. It doesn't have to be #6. That is an almost guaranteed hit pattern for at least a week. It is pretty sick actually. You scan see the start of a trough split on the Pac NW. Pattern turns SW to NE over the ridge from there. The ridge would not be transient. Almost an omega might setup. Wow...The US would need to become Neo and dodge bullets. I'll post on the ensembles later...
2 likes
Top

Euro 240 ensembles say sustained ridge...hard to get recurve west of 65W. No one wants what is being shown...you could get multiple hits to the coast. In other words, we would want the euro to be very very wrong...
0 likes
Top

And again.... This one shows intensity 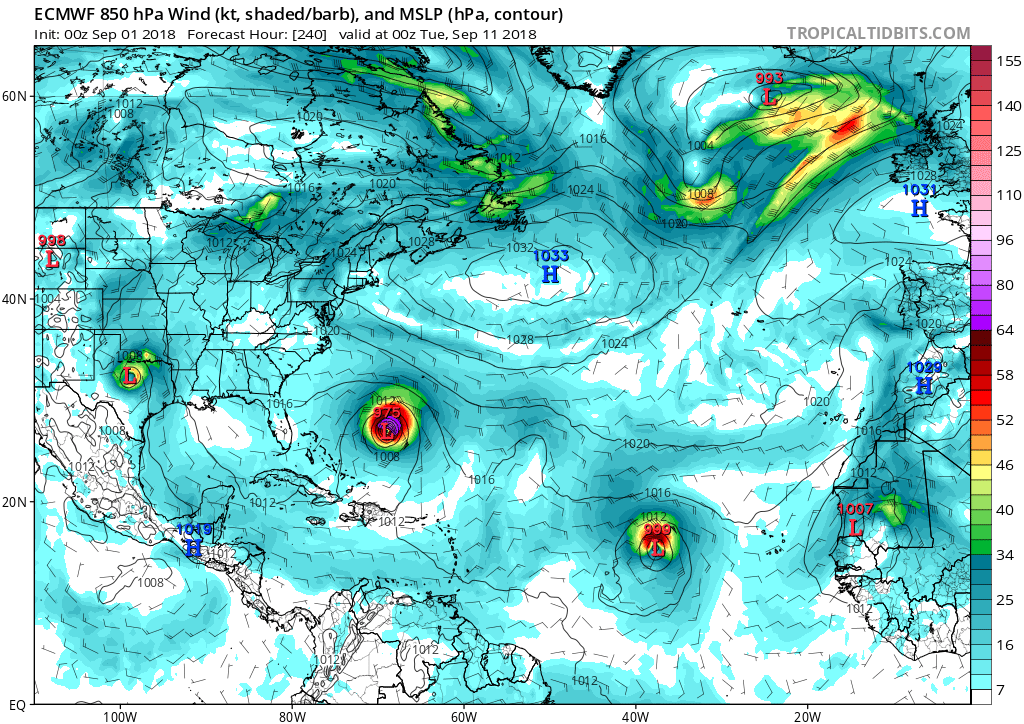 0 likes
REMINDER: My opinions that I, or any other NON Pro-Met in this forum, are unofficial. Please do not take my opinions as an official forecast and warning. I am NOT a meteorologist. Following my forecasts blindly may lead to false alarm, danger and risk if official forecasts from agencies are ignored.
Top

0 likes
Tracking weather since 1992 | Following S2K since 2005
The views herein are the author’s alone. Please defer to the N.H.C./N.W.S. for official information.
Top

Both the 00Z operational ECMWF and the 00Z EPS ensemble mean have trended toward a stronger PV streamer (TUTT) over the western MDR by day six (120 hours). Given that Florence is likely to be weaker in the short term than originally forecast, the interaction with the TUTT may be sufficient to destroy the circulation and thus reduce any threat to the U.S. So strong vertical wind shear may be the factor that could prevent a (strong) TC landfall on the U.S. East Coast, given the otherwise favourable steering pattern that is present and expected to persist. There is a lot of volatility on recent EC/EPS runs in regard to the positioning and amplitude of large-scale features in the medium to long range, so any forecast at this stage is likely to be rather premature, highly mutable, and subject to large errors, so it should be labeled "low confidence."

Note that a large number of 00Z EPS ensemble members actually kill Florence by days six or seven (144 hours), due to the very TUTT that I have mentioned: 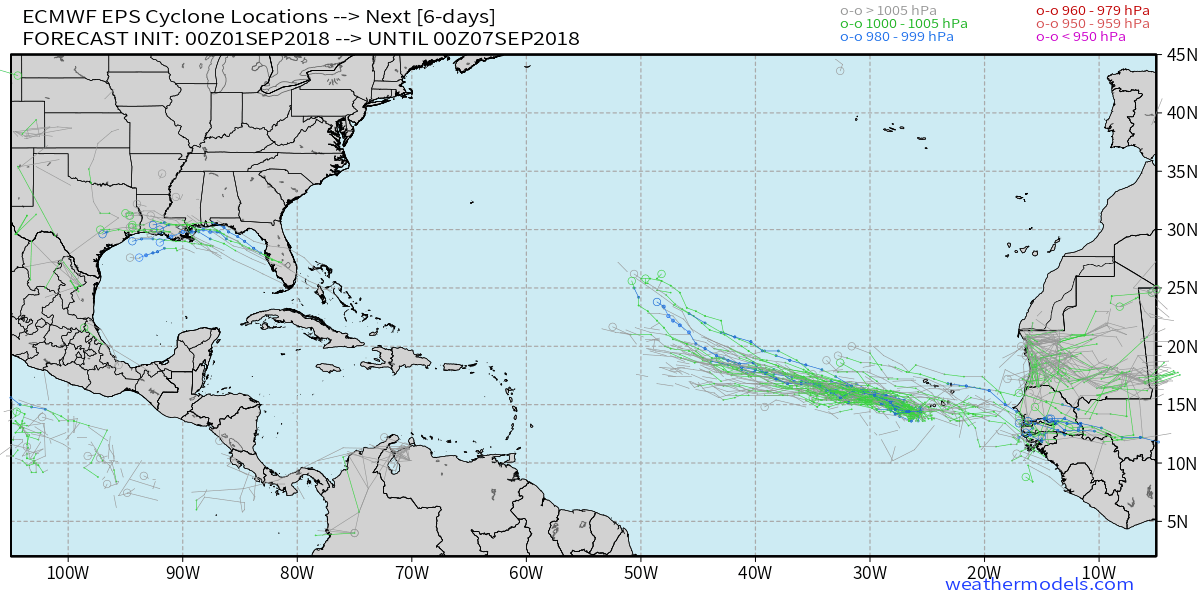 1 likes
Tracking weather since 1992 | Following S2K since 2005
The views herein are the author’s alone. Please defer to the N.H.C./N.W.S. for official information.
Top

I hope this is just the windshield wiper motor starting up.

Wow, I almost spit out my coffee looking at the 00z ECMWF. Just goes to show how many options are on the table right now.
0 likes
My posts are my own personal opinion, defer to the National Hurricane Center (NHC) and other NOAA products for decision making during hurricane season.
Top

Like I mentioned yesterday morning I am not surprised that the models keep trending westward, last night's Euro ensembles are getting too close for comfort. 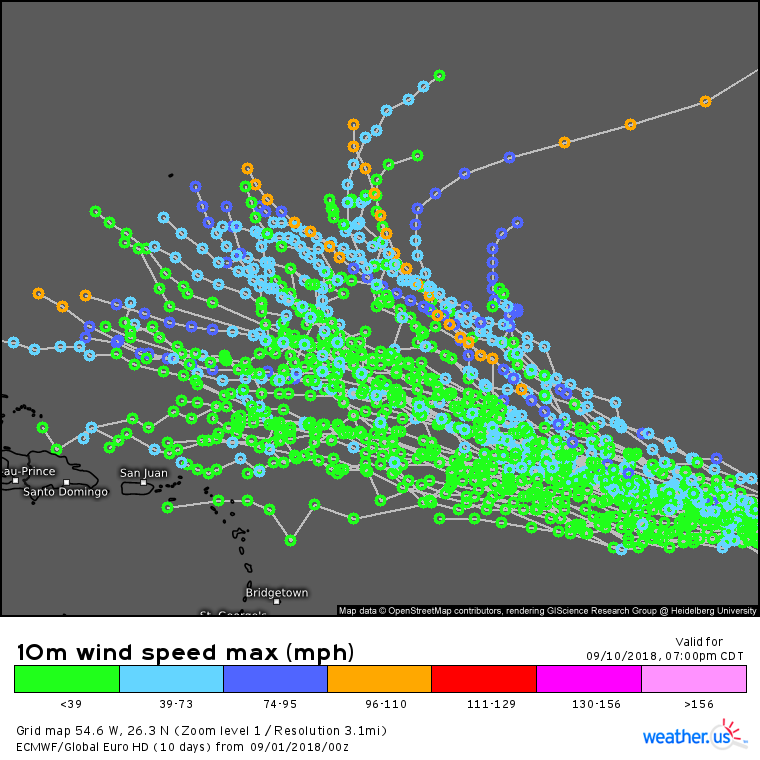 Definitely was not expecting these W shifts, especially the Euro run overnight - hopefully just a one off
0 likes
Top
Post Reply
4060 posts