Not buying anything yet with 95l...will much better guidance on Wednesday.

Isaac scares..the ones that die off and reform are scary
0 likes
i am a big stupid ugly moron with an ugly face and a big butt and my butt stinks and i like to kiss my own butt
Top

Whatever is winding up in the NW Caribbean looks like it's doing it pretty quickly and further north.

Frank P wrote:sure looks like a mid level trying to spin up off the western tip of Cuba in the channel on the latest sat loops this afternoon

Stormcenter wrote:Whatever is winding up in the NW Caribbean looks like it's doing it pretty quickly and further north.

Frank P wrote:sure looks like a mid level trying to spin up off the western tip of Cuba in the channel on the latest sat loops this afternoon

Yeah, gotta feel grateful that it’s under shear att... does look like it has had a more northerly component to it the last 24 hours or so, albeit some of that might be the result of the shear... impressive wave for sure..
0 likes
Top

The MLC will peel off near Cuba. Watch the surface reflection near Belize. That will be the dominant feature heading NW.
4 likes
Top

Is 95l related to all the storms and cloud cover in south Florida right now?
0 likes
Personal Forecast Disclaimer:
The posts in this forum are NOT official forecast and should not be used as such. They are just the opinion of the poster and may or may not be backed by sound meteorological data. They are NOT endorsed by any professional institution or storm2k.org. For official information, please refer to the NHC and NWS products.
Top

eastcoastFL wrote:Is 95l related to all the storms and cloud cover in south Florida right now?

some serious convection firing off late this afternoon... Do you have a shear map?
0 likes
Top

Isaac scares..the ones that die off and reform are scary

I think you can almost book it that it will form. Just about all models close something off and get stronger as it’s coming in. RGEM probably has the strongest depiction and has it wound up pretty good at 1003 and falling as it comes into range at the end of the run (54 hours/Wed 7pm). Looks like it would landfall Thursday somewhere on the mid or South Texas Coast. FV3 probably shows the least.

As for Isaac, I don’t know. Depends on the MJO in my opinion. Forecasts have been all over the map. NCEP has it actually going in the circle and hooking right back to 1. That could be indicative of favorable then not so favorable then favorable again. ECMWF has it also going back to the circle and looping back to 8. JMA does not agree and heads to 3. 3 is not usually favorable for most of the hemisphere, but there are always mini-spots that are enhanced. JMA does stay near the circle though so there’s not likely going to be any strong pattern amplification. We will see.

Showers and thunderstorms over the northwestern Caribbean Sea,
western Cuba, and the Yucatan Peninsula of Mexico are associated
with a surface trough and are showing some signs of organization.
This system is forecast to move slowly northwestward across the
Yucatan Peninsula on Tuesday with limited development. Upper-level
winds are forecast to become more conducive for development later in
the week, and a tropical depression could form on Thursday or Friday
while the disturbance moves across the western Gulf of Mexico.
Interests across northeastern Mexico and the coast of Texas and
Louisiana should monitor the progress of this system. Regardless of
development, heavy rainfall and gusty winds are likely over western
Cuba and the Yucatan Peninsula through Tuesday.
* Formation chance through 48 hours...low...30 percent.
* Formation chance through 5 days...medium...60 percent. 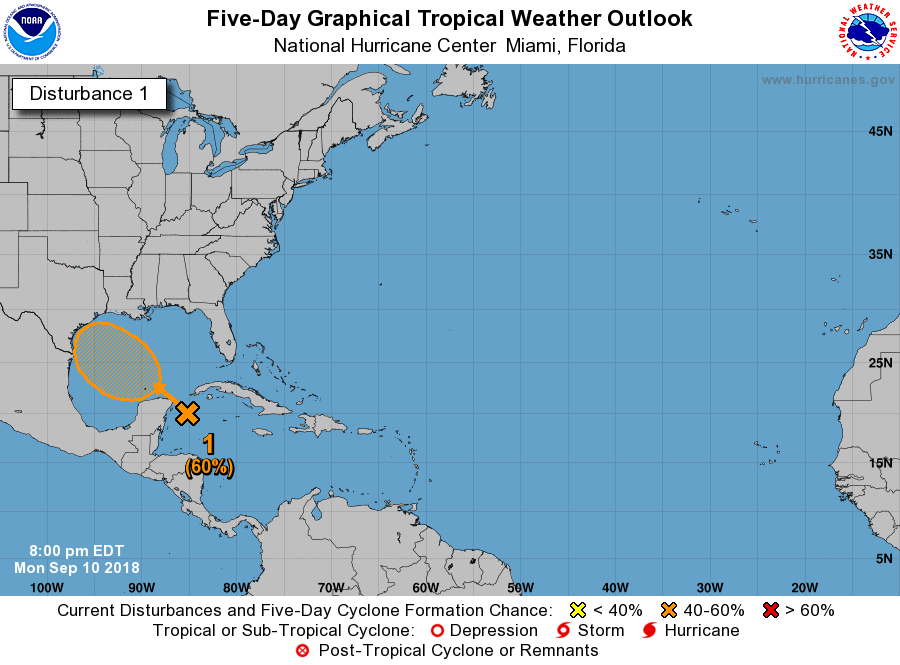 Do you have a shear map?

You can get them on CIMSS. Shear is there compliments of the ULL around the northern tip of the Yucatán. As it pulls away, the eddy in the wake often gets an anticyclone/high building over top. It’s one of the ways to get home brew systems. I call this type of setup (when it happens) pattern reversal. Some other ways are old fronts or boundaries or when a complex drops in the Gulf from the US. You will be able to see it happening best on Water Vapor. If it works out, look for conditions improving late Wed into Thursday and if the ULL moves away quicker, all the way into landfall.

stormlover2013 wrote:lot can change still 4 days to go and it does look like its organizing.

Stormcenter wrote:Landfall of whatever forms is still highly questionable
IMO.

I have always a stronger storm will likely go more poleward. Would that be the case if this 95l becomes a tropical depression if that is even in the cards?
0 likes
Top

Stormcenter wrote:Landfall of whatever forms is still highly questionable
IMO.

I have always a stronger storm will likely go more poleward. Would that be the case if this 95l becomes a tropical depression if that is even in the cards?

It’s a good rule of thumb but not 100%. It always depends on the steering currents. In this case, you’d think the general propagation west with a spin up would lead to a TX/Mex landfall. If it was later in the season, you might look for a stall and drift NE ahead of a front if one was coming down. I think it’s even money you get a Texas hit, maybe slightly less that it hits Mexico and less still that it hits sw la.
1 likes
Top

Code red! ECMWF forecasts the shear to decrease considerably over the Gulf of Mexico by Wednesday, making much more development of #al95 possible. Waiting for the new ECMWF and its ensembles to gauge exactly what we may looking at. #TropicalUpdate #Tropics

Nice. He sees what I’m looking at but probably studied a buttload more of the pattern evolution than I have. I was thinking late Wednesday more by eyeballing the models.
0 likes
Top

The way the convection has maintained itself extremely well, combined with some obvious broad midlevel vorticity already, makes me honestly expect that we get at least a TD out of this.
3 likes
Colors of lost purpose on the canvas of irrelevance

Not a meteorologist, in fact more of an idiot than anything. You should probably check with the NHC or a local NWS office for official information.
Top
Post Reply
263 posts