In the last few runs of the ICON, GEM and UKMO suggest that a tropical depression or a weak tropical storm can form over the southeastern edge of the Mediterranean Sea. The GFS and ECM only show a weak low pressure area without development now. The water is still very warm in that area, around 25-27 °C. 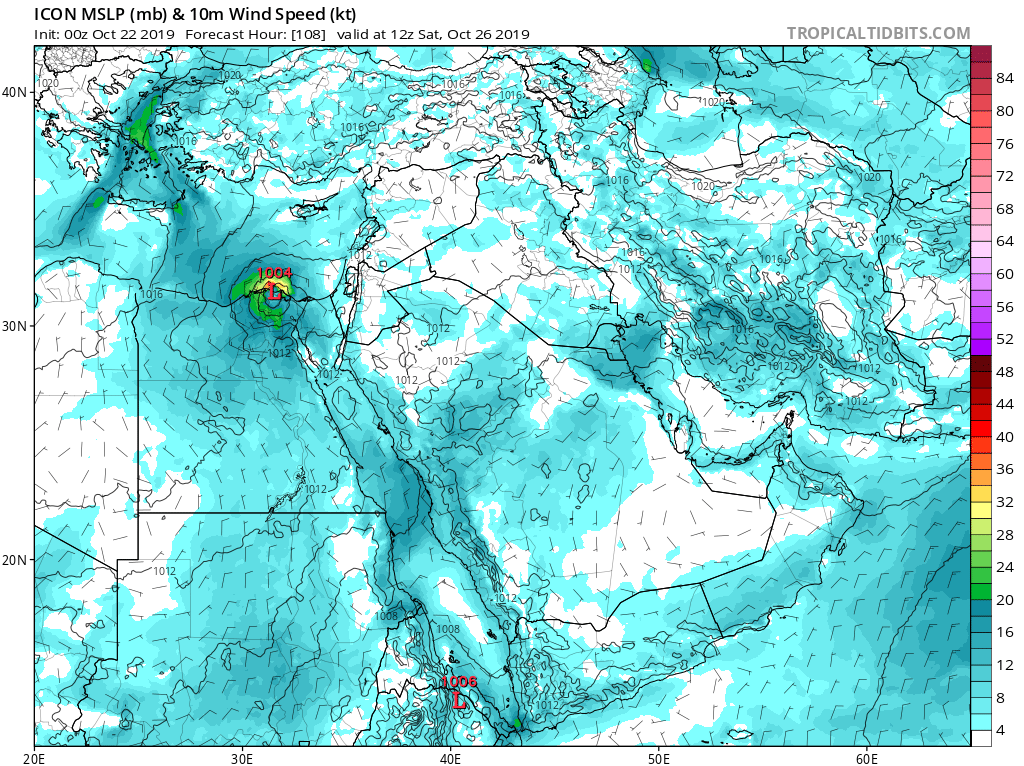 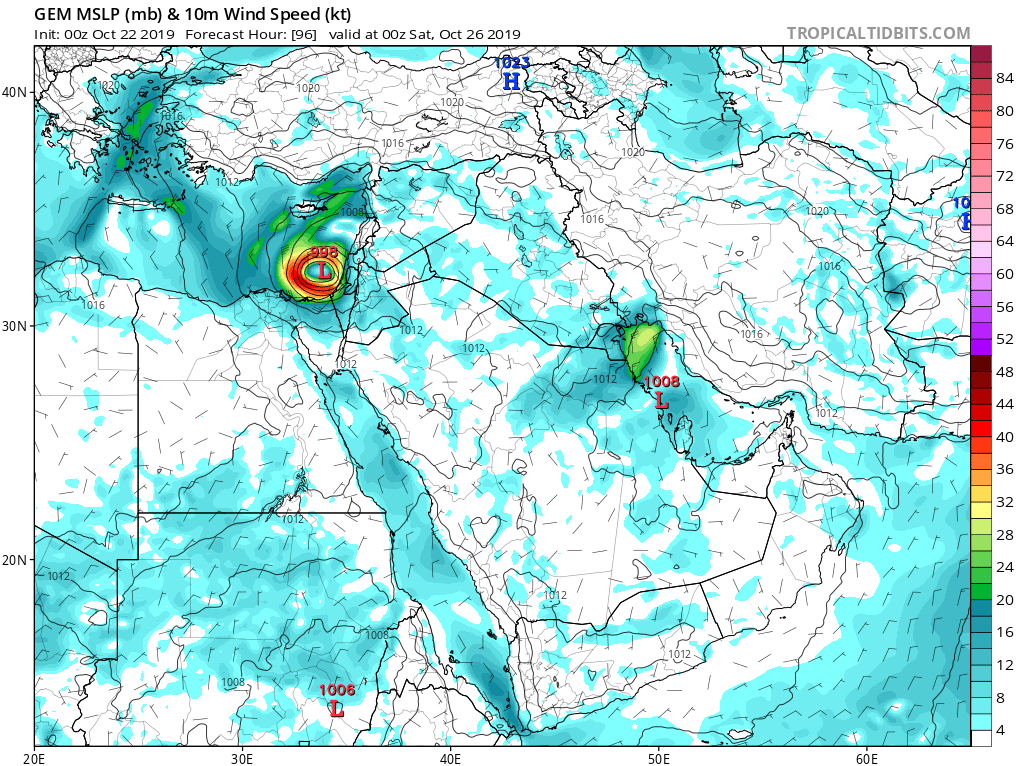 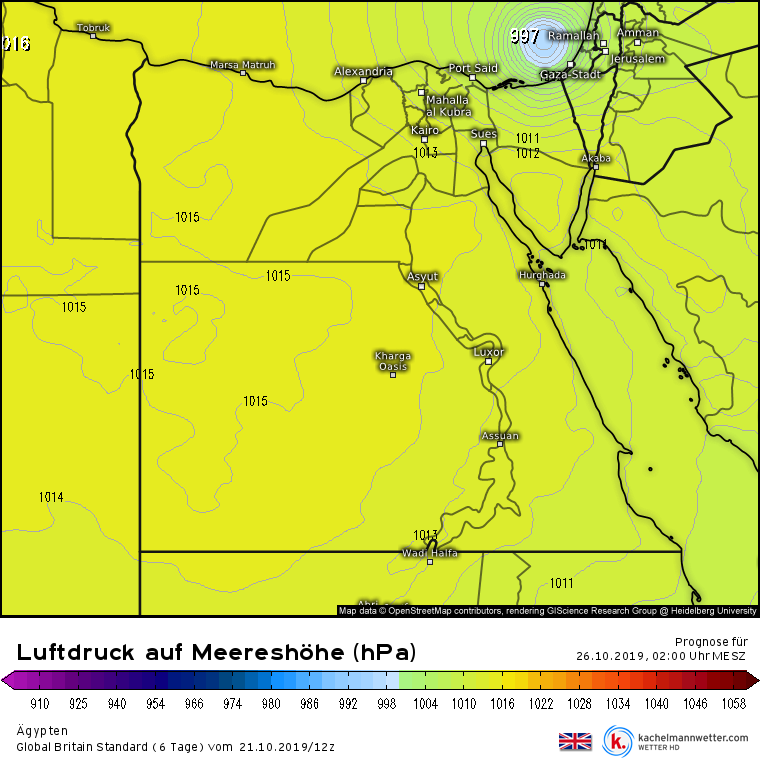 Scattered storms are also forecast in the pool of low geopotentials over the eastern Mediterranean and the Middle East.
1 likes
Leben, was ist das?
Top

Nancy Smar wrote:Scattered storms are also forecast in the pool of low geopotentials over the eastern Mediterranean and the Middle East.

They are already there, and the some circulation is also visible, at least in the mid levels. The 00Z ICON showed a strong TS with hurricane-force wind gusts, and the GFS also develop the cyclone much more than yesterday (however only to a TD).

What is the historical precedent here? And under whose authority does this storm fall?
0 likes
Top

plasticup wrote:What is the historical precedent here? And under whose authority does this storm fall?

Some tropical or subtropical cyclone formed earlier over the Mediterranean Sea, mostly with ransition from extratropical lows, but last year a cyclone (Otilie) was similar to this and it did not have precursor extratropical stage. You can find reports from a few cyclone there: http://zivipotty.hu/tcr.html

The convection weakened sligtly in the last hours and became disorganised, but recently a small convective flareup ongoing over (or very near) the center. Now all of the models show that it will become tropical depression by tomorrow morning ang at least a weak TS by Friday, but some of them show more strengthening. At 18 UTC a nearby ship reported 33 kt winds, so if the convection return, it is possible that the cyclone already reach tropical storm strength at night.
http://ogimet.com/cgi-bin/gsynop?lang=en&zona=orimed&base=bluem&proy=orto&ano=2019&mes=10&day=23&hora=18&vwi=Wi&Send=send

And just for fun, the Hirlam model make hurricane from the cyclone (it looks almost impossible to me, but I can't rule out a strong tropical storm). 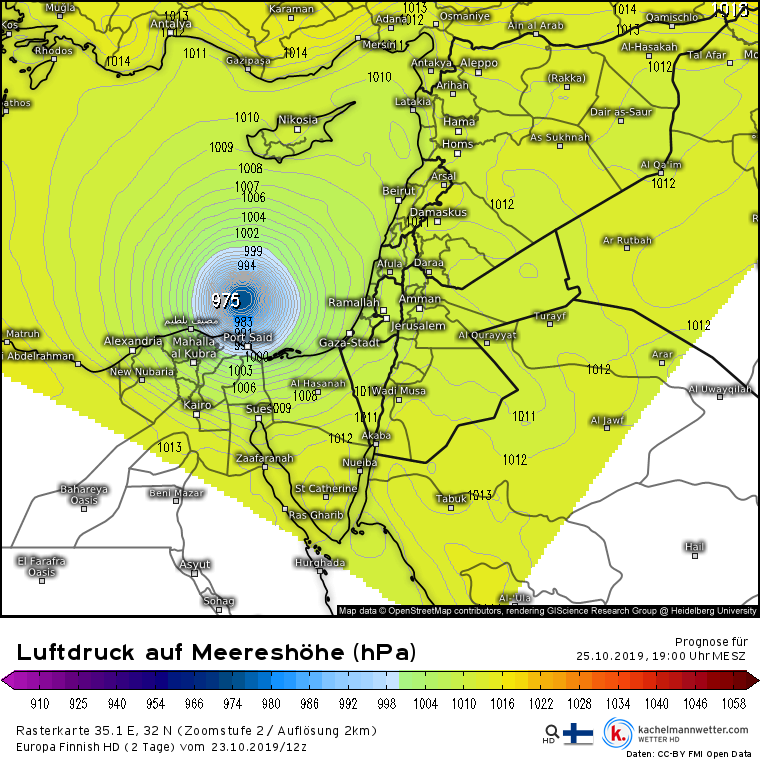 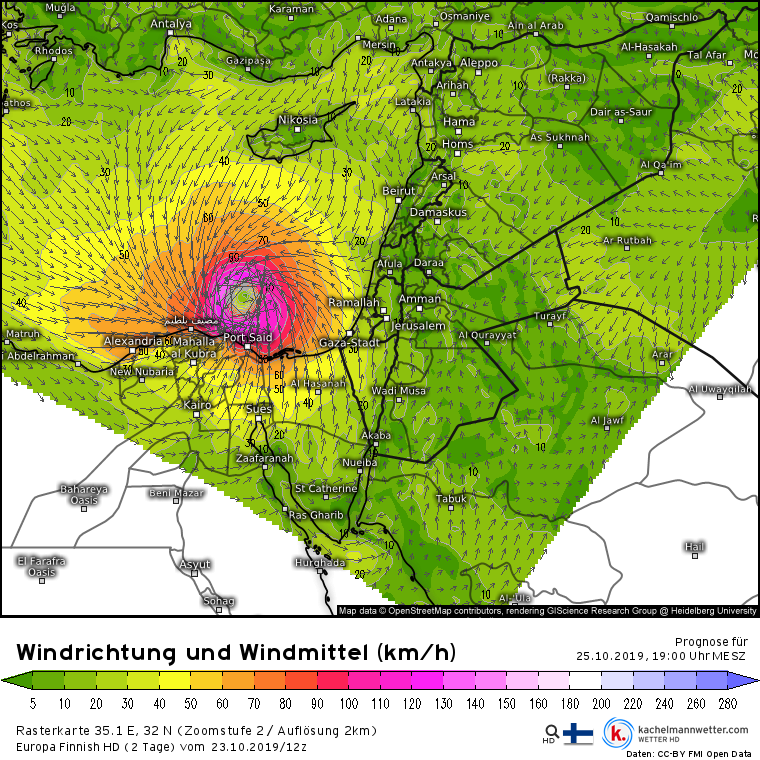 Re: MED: (Sub)Tropical Cyclone over the SE Mediterranean Sea

Looks closed this afternoon/evening with 25kt winds. Convection near the center has been on the increase in the last few hours. 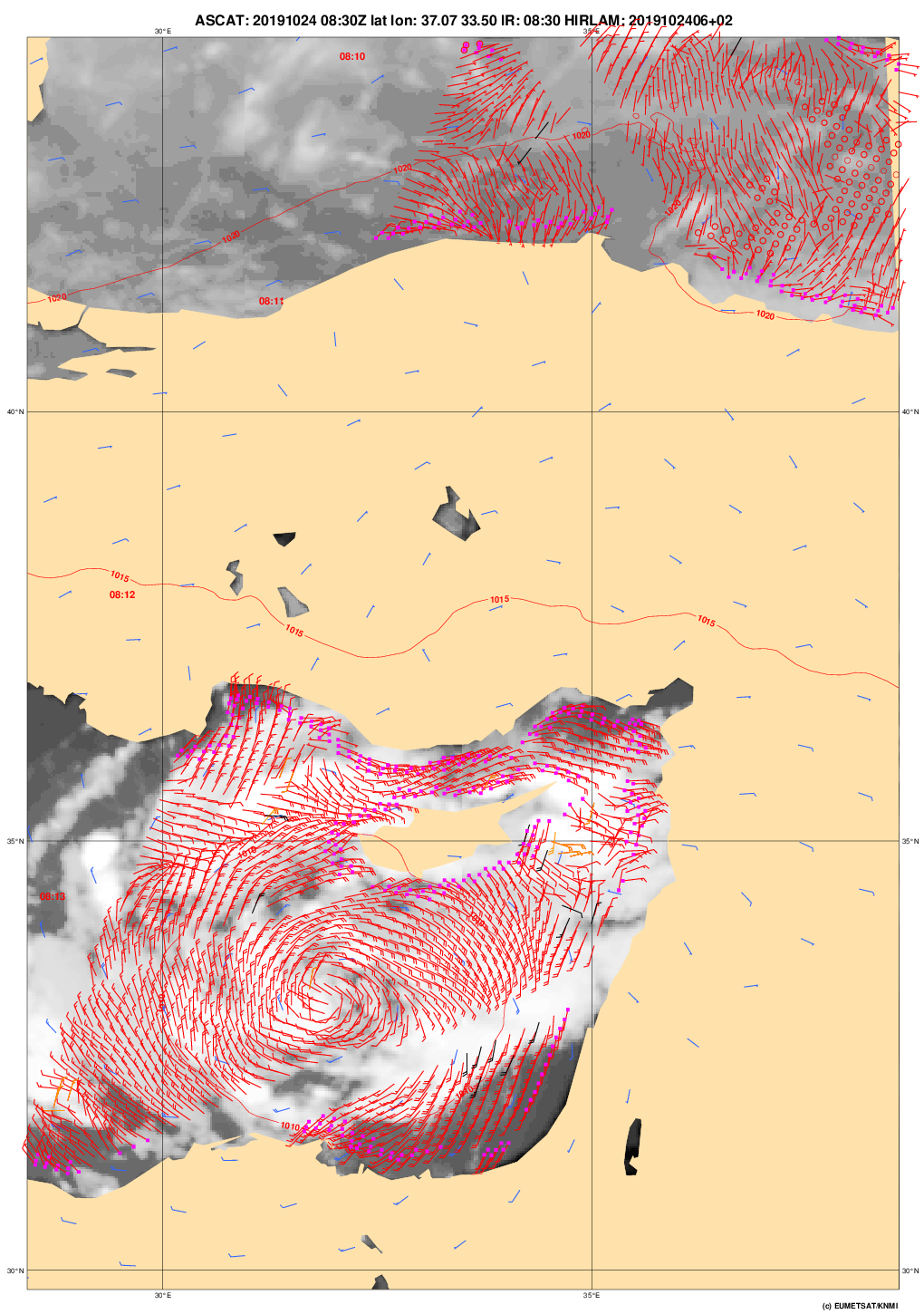 - Treat my opinions with a grain of salt. For official information see your local weather service.
- In the summer I'm in Austin, Texas; otherwise I'm in college in upstate New York
Top

Yes, it developed slowly but steadily through the day and especially in the last hours. If it contuines it can be a TD soon, and possibly a TS tomorrow. The upper level outflow also seems very good in all quadrant.

It surprises me how often tropical-like or sometimes even bona fide tropical cyclones can form in the Mediterranean Sea. You'd think they'd choke on dry air pulled from over the arid northern Africa or the Arabian Peninsula. I guess that's why the cyclones are usually fairly compact and seldom exceed minimal hurricane strength.
0 likes
Top

Certainly an odd system. Hopefully it remains weak and disorganized. Although the GFS shows it dumping probably much needed rain in Sinai and portions of Gaza.
1 likes
RIP Kobe Bryant
Top

Vince_and_Grace_fan wrote:Yes, it developed slowly but steadily through the day and especially in the last hours. If it contuines it can be a TD soon, and possibly a TS tomorrow. The upper level outflow also seems very good in all quadrant.

Yeah it looks like its on its way. Hopefully some dry air can impede development. I really doubt the areas it may affect are prepared or can handle a TS/Hurricane.
1 likes
RIP Kobe Bryant
Top 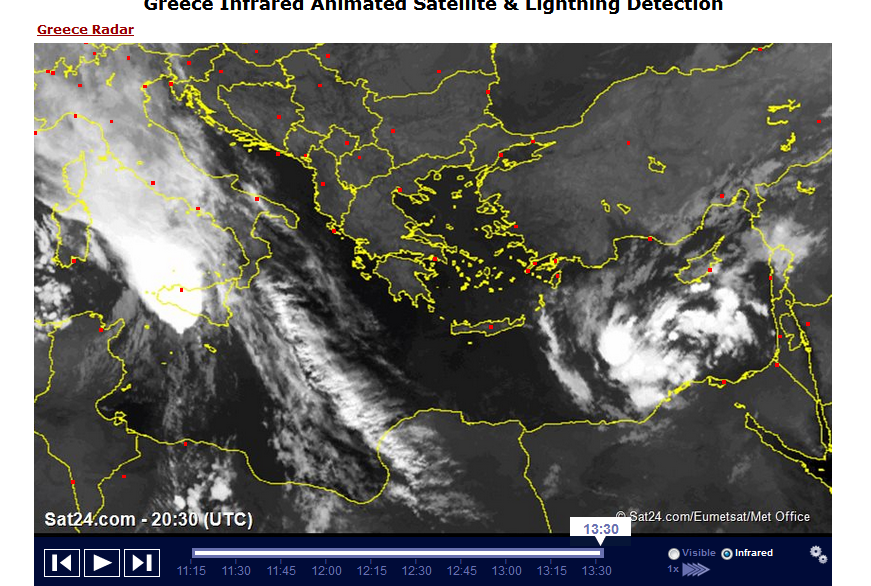 The satellite presentation became a bit disorganized once again since the early evening hours, but the circulation seems better than earlier according to the last ASCAT pass. It may classifiable as a depression since the convection is at least sustained. 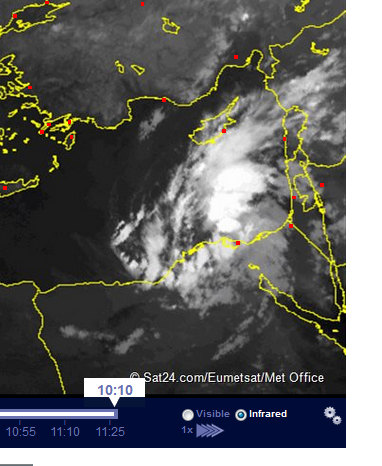 After the cycone struggling to maintain organized convection yesterday, the convection became more concentrated and sustained in the night hours, however it displaced to the northeast side of the cyclone due to the stronger southwesterly shear. The landfall occurred around 02-03 UTC NW of Port Said. The nearby stations reported maximum sustained wind of 15-20 kt and minimum pressure around 1006 hPa but a ship reported 29 kt wind far WNW of the center at 00 UTC. Based on these it is likely that the system did't reached tropical storm strength and peaked as a 30 kt depression before the landfall.

ASCAT passes at 07-08 UTC showed many 30 kt vectors, so it cannot be rule out that the cyclone briefly reached tropical storm intensity with 35 kt winds before and around the landfall (00-06 UTC) when the convection was stronger yet.

Re: MED: (Sub)Tropical Cyclone over the SE Mediterranean Sea

Finally I made the satellite animations from the cyclone: 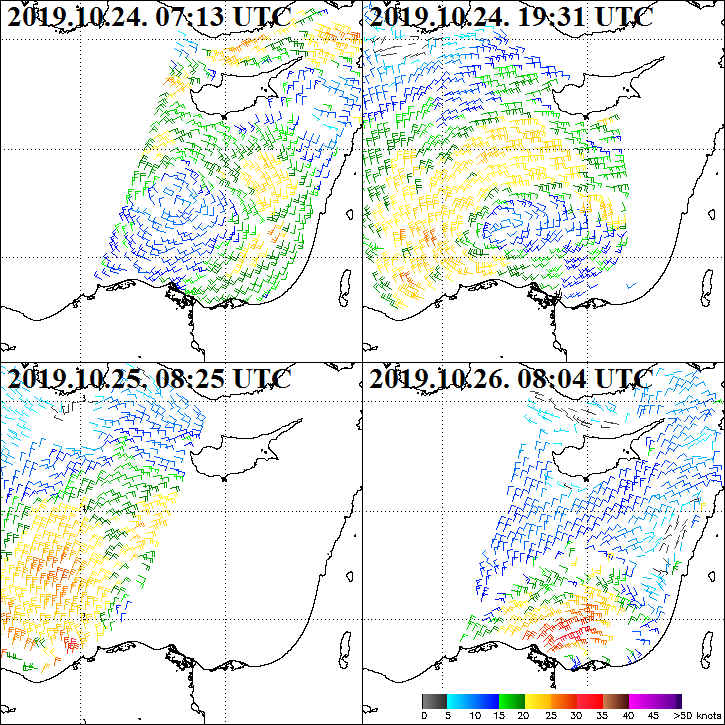 According to this measurements and the satellite images, I think it was rather subtropical than tropical in the first half of its lifetime despite the clearly non-frontal appearance and the well-defined upper level outflow, but I am not sure when it became tropical. How do you think abuut it?
0 likes
Top
Post Reply
17 posts • Page 1 of 1