Almost looks like a second center is trying to form as the old one struggles, to the NE. Lots of deep convection and lightning. Doesn't look closed, but interesting.
1 likes
...but still, though, a lot more interesting than the 2013 season.

Rebekah's cloud pattern has eroded significantly since the previous
advisory and only a narrow band of fragmented convection remains in
the northeastern quadrant. There are no signs of any upper-level
anticyclonic outflow, so the cyclone will retain subtropical status.
Earlier ASCAT-A/B/C overpasses indicated several 38-39 kt surface
wind vectors in the southern semicircle and given that Rebekah is
now moving at a faster forward speed, the intensity remains at 40 kt
despite the degraded convective pattern.

The initial motion estimate is 065/18 kt. Rebekah is forecast to
move east-northeastward to eastward around the southeastern
periphery of a larger non-tropical low pressure system for the next
day or two before dissipating by 48 hours. The model guidance has
shifted northward significantly and the official forecast has been
moved in that direction as well, but not as far north nor as fast as
the model consensus, lying closer to a blend of the GFS and ECMWF
model solutions.

Rebekah will be moving over cooler waters that are less than 20 deg
C and into a stronger vertical wind shear regime by 12 h and beyond.
This combination of unfavorable dynamic and thermodynamic conditions
should cause the cyclone to steady weaken and become a post-tropical
cyclone in 24 h or less, with dissipation expected by 48 h. Although
the center of Rebekah is expected to pass north of the Azores, those
islands could still receive gusty winds and locally heavy rainfall,
especially on the southward-facing slopes of elevated terrain.

Since Rebekah is not expected to be a tropical or subtropical
cyclone when it nears the Azores, hazard information can be found
in regular products issued by the Portuguese Institute for the Sea
and Atmosphere (IPMA) for those islands at
https://www.ipma.pt/pt/index.html.

I am not a Professional Met just an enthusiast. Take everything I say with a grain of salt and get your weather forecasts from the Pros!
Top

She's putting her Halloween costume on.

The new advisory is great. I forgot it was Halloween. 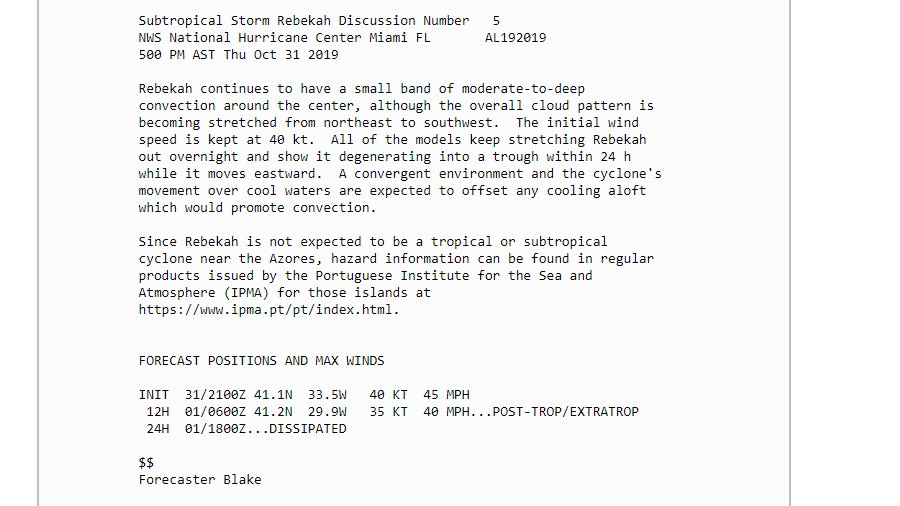 Satellite imagery indicates that Rebekah has degenerated to a
remnant low as the circulation remains void of deep convection. In
addition, the system is starting to merge with a weak frontal system
over the northeastern Atlantic. Re-development of deep convection
appears unlikely, and the remnants of Rebekah are expected to
weaken to a trough between 12-24 h.

The initial motion is 095/17, and a slightly faster eastward motion
is expected until the system dissipates.

This is the last advisory issued on Rebekah by the National
Hurricane Center. Additional information on this system can be
found in High Seas Forecasts issued by Meteo France under WMO header
FQNT50 LFPW and available on the web at
www.meteofrance.com/previsions-meteo-ma ... randlarge/
metarea2. Hazard information for the Azores can be found in regular
products issued by the Portuguese Institute for the Sea and
Atmosphere (IPMA) for those islands at
https://www.ipma.pt/pt/index.html.