Satellite imagery indicates that the area of low pressure and
associated convection located several hundred miles southwest of
southern Mexico has become better organized, with the center
embedded in the northern side of a large area of deep convection.
In addition, earlier scatterometer data revealed that 35-kt winds
existed in the eastern semicircle of the developing cyclone.
This intensity is in agreement with the latest subjective satellite
estimate from TAFB and thus advisories are started on Tropical
Storm Barbara, the second named storm of the Eastern Pacific
hurricane season.

Barbara's initial motion is 285/14 kt. A mid-level ridge to the
north of the cyclone will steer it to the west-northwest for the
next several days. Later on in the forecast period, Barbara will
approach the southwestern periphery of the ridge which should induce
some slowing of the forward motion. The NHC track forecast lies in
the middle of a suite of guidance that is tightly clustered through
96 hours and begins to diverge slightly beyond that time frame.

The overall satellite presentation of Barbara suggests that there is
some shear affecting the convection over the northern part of the
cyclone. Statistical guidance concurs with this and indicates
10-15 kt of northwesterly shear currently over the circulation.
This shear is forecast by the guidance to begin to abate in about 24
hours. Otherwise, Barbara is expected to be in a favorable
environment for intensification and over warm waters for the next 4
to 5 days. The official forecast takes into account this initial
shear during the early inner-core development stages of Barbara, and
calls for a slow and steady strengthening through 24 hours.
Thereafter, the lower-shear environment and likely consolidating
inner-core should allow for a faster rate of intensification. The
official forecast intensity is close to the dynamical guidance
through 72 hours, and is near the upper edge of the guidance beyond
72 hours, bringing Barbara to category 2 intensity by 72 hours.
After 96 hours, Barbara will be approaching a tight gradient in SSTs
to its north. Also, both dynamical and statistical guidance indicate
that the cyclone will be approaching a region with increasing
southwesterly shear. Both of these factors should contribute to a
gradual weakening after 96 hours.

0z ECMWF and 6z GFS both show this getting blasted apart to some extent before approaching the Hawaiian Islands. Not too concerned about them at the moment given the likely weakening after day 6 or so.
4 likes
EPAC spreadsheet
Top

Barbara's convection is a bit south displaced, as you can see generally where the LLC lies, north of the center of the convective blob.

4 likes
This post was probably an opinion of mine, and in no way is official. Please refer to http://www.hurricanes.gov for official tropical analysis and advisories.

If they're forecasting 90kts right from the start, there's usually a good bet it's going to achieve major, and they're probably expecting it. While the tropics have been slow the past few weeks I've been going through some archives, and the impression I have is that they've become a tad bit more conservative over the years.
I'm feeling fairly good about my call for 120kts.
3 likes
First season tracking: 2001
First Cat 5 tracked: Isabel '03
Favorite basin: EPAC+CPAC
Top

12z Euro stronger than past runs thru 72 hours. 989 mbs at 00z vs 975 mbs at 12z.
0 likes
Visit the Caribbean-Central America Weather Thread where you can find at first post web cams,radars
and observations from Caribbean basin members Click Here
Top

Much stronger thru 96 hours,957 mbs at 12z vs 974 at 00z.
0 likes
Visit the Caribbean-Central America Weather Thread where you can find at first post web cams,radars
and observations from Caribbean basin members Click Here
Top

NotSparta wrote:Barbara's convection is a bit south displaced, as you can see generally where the LLC lies, north of the center of the convective blob.

Yeah shear is blowing convection off from north of the system. Other than that, Barbara looks like its set to be an intense major hurricane soon as the shear relaxes.
4 likes
RIP Kobe Bryant
Top

At 216 hours we have a big threat if Euro is right. 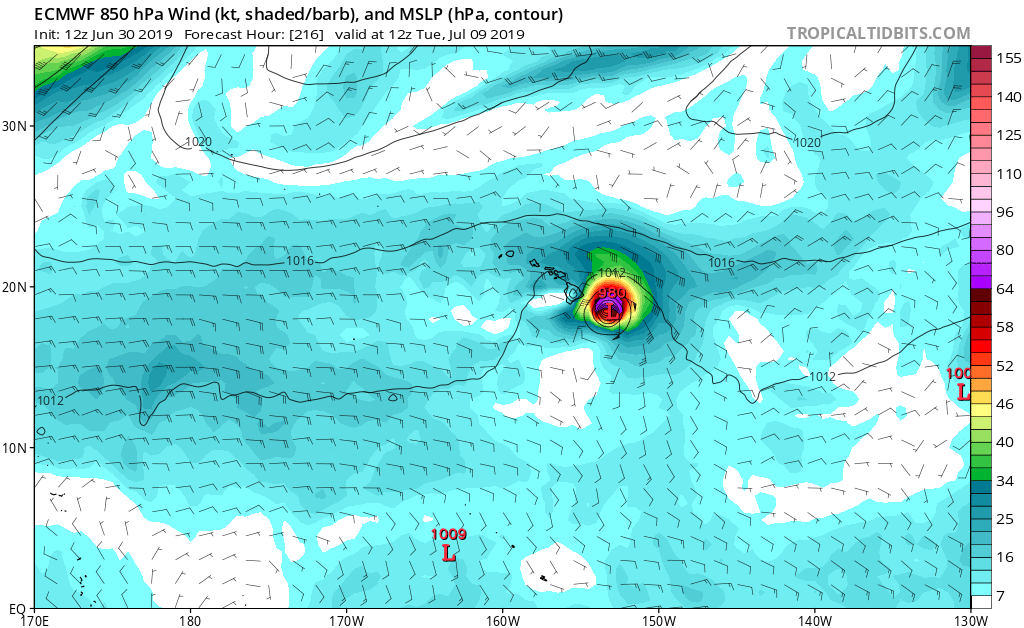 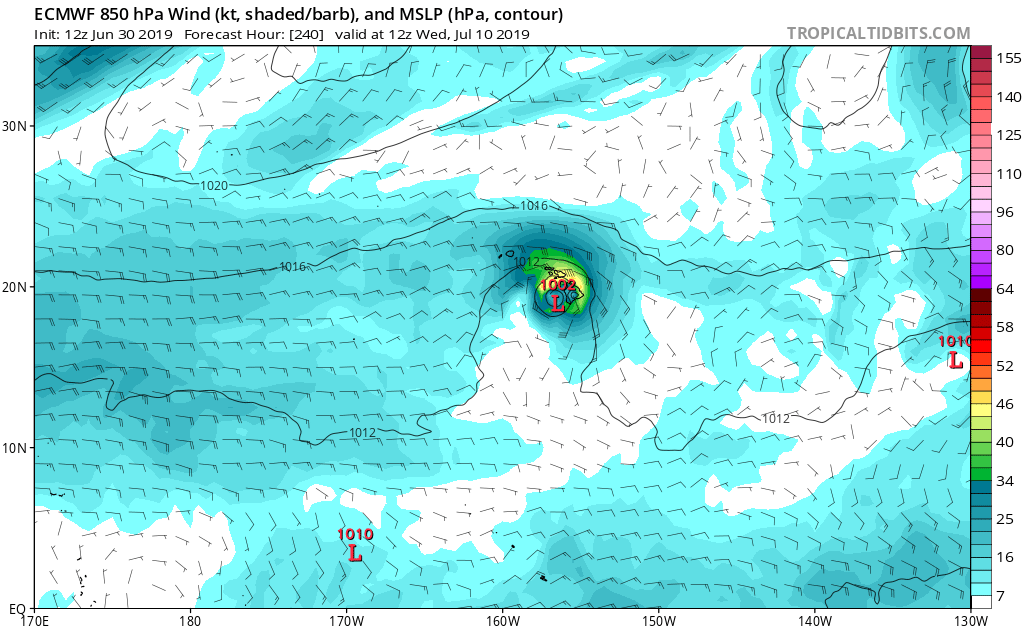 NotSparta wrote:Barbara's convection is a bit south displaced, as you can see generally where the LLC lies, north of the center of the convective blob.

That's pretty normal for a monsoon trough system early in its life, even in a low shear environment. As it detaches, some of the best low level convergence still remains on the south side of the system with the monsoon trough. It happens quite a bit in the Western Pacific too.
5 likes
Wayward meteorology student on a journey back to the promised land.

cycloneye wrote:At 216 hours we have a big threat if Euro is right.

Should probably specify that the system is being torn apart by shear on this run. Note the extremely rapid weakening (~980 to ~1002 mb) in twenty-four hours. Ad verbatim: BARBARA literally goes from a strong Cat-1 hurricane to a low-end tropical storm just as it nears the Big Island. Since BARBARA may well turn out to be a compact and intense system early on, any increase in shear would make the rate of weakening on the ECMWF seem quite reasonable.
1 likes
Formerly CapeVerdeWave/MiamiensisWx | Tracking weather since 1992 | Following S2K since 2005 | Gordon ‘94, Irene ‘99, Frances ‘04, Wilma ‘05, Irma ‘17 | March ‘94 | TS • H • Tropical • Extratropical
The posts in this forum are NOT official forecast and should not be used as such. They are just the opinion of the poster and may or may not be backed by sound meteorological data. They are NOT endorsed by any professional institution or STORM2K. For official information, please refer to products from the NHC and NWS.
Top

The day 9 to 10 weakening is due to moving over a 10k volcano in all likelihood.

I expect shear to be a problem in general though.
0 likes
EPAC spreadsheet
Top

Looking better as the hours pass.Convection over the LLC trying to wrap around. By the way,that little black dot is French Clipperton Island.