The posts in this forum are NOT official forecasts and should not be used as such. They are just the opinion of the poster and may or may not be backed by sound meteorological data. They are NOT endorsed by any professional institution or STORM2K. For official information, please refer to products from the National Hurricane Center and National Weather Service.

Ocean component of ENSO is again trying to flip to +ENSO. 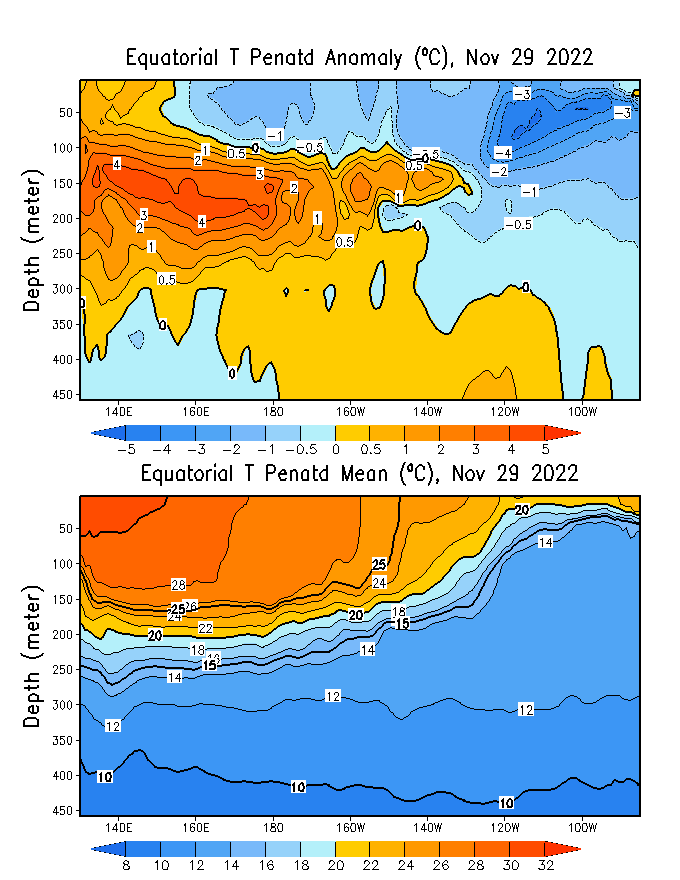 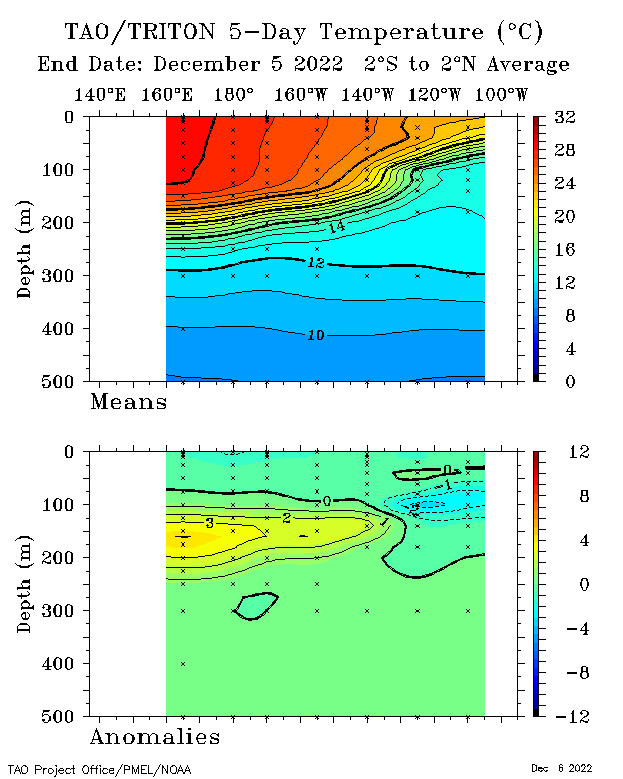 But the atmosphere continues to not cooperate so... Currently, more of the same of what we've seen in the last 3 years or so.

Lot's of time for things to change but I would argue this time last year, things looked more prime for +ENSO compared to the current setup.
Last edited by Kingarabian on Wed Dec 07, 2022 3:38 pm, edited 1 time in total.
3 likes
RIP Kobe Bryant
Top

I can't find a good spot to post this, y'all can move it to another location if need be.

My posts are NOT Endorsed by S2K, NHC or SPC, please look up the SPC, NHC & NWS for more info.

Never say Never with weather! Because ANYTHING is possible!
Top

La Niña is expected to continue into the winter, with equal chances of La Niña and ENSO-neutral during January-March 2023. In February-April 2023, there is a 71% chance of ENSO-neutral. El Niño chances increase to 49% for JAS. 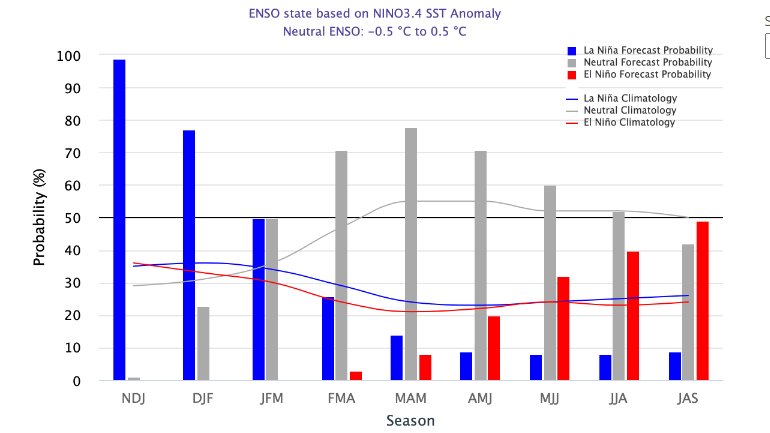 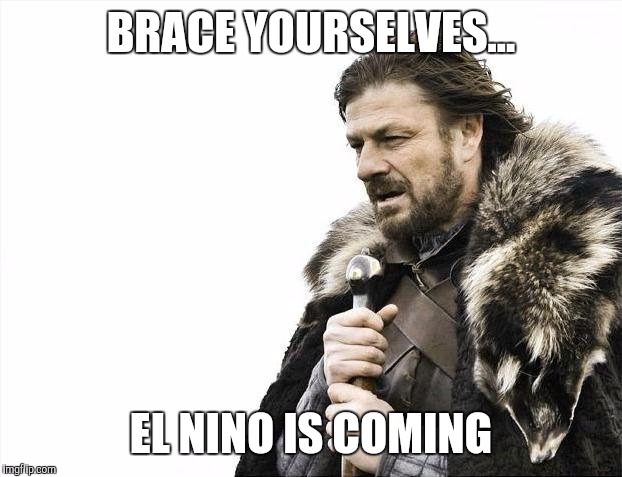 My posts are NOT Endorsed by S2K, NHC or SPC, please look up the SPC, NHC & NWS for more info.

Never say Never with weather! Because ANYTHING is possible!
Top

El Niño seems like a strong possibility. Hopefully it ends the cat4 strikes on the US.
1 likes
I am by no means a professional. DO NOT look at my forecasts for official information or make decisions based on what I post.

Goal: to become a registered expert over tropical and subtropical cyclones.
Top

Actually I'm very worried about and active Epac next year, we saw strong landfalls in niña years this past two seasons, I don't want to think we could expect if conditions are actually good in that basin for Mexico
0 likes
Top

Won't do much IMO, very weak anomalies. But subsurface warm anomalies should continue to push eastward. Look at that IO WWB though. Clearly La Nina is still in control for now.
1 likes
RIP Kobe Bryant
Top

MJO needs to stop lingering in the IO if we are going to get an El Nino next year.
2 likes
EPAC spreadsheet
Top

Blown Away wrote:Has there been 3 La Nina’s followed by an El Niño?

Now with that being said, 1998-2000 were El Ninos, but 2001 was a neutral year, and it ended up being on level with 2000's activity (interestingly with more major hurricanes and hurricanes).

Personally, I'm very curious to see if we end up with an El Nino or a neutral for next year (imho I think it's pretty safe to say that La Nina is not going to happen). Because if for whatever reason we fall short of El Nino thresholds, we could conceivably see at least an average Atlantic season yet again.
2 likes
Unless explicitly stated, all information covered in my posts is based on my opinions and observations. Please refer to a professional meteorologist or an accredited weather research agency otherwise, especially if serious decisions must be made in light of a dangerous hurricane.
Top

In terms of odds, anytime there's a double dip Nina, an El Nino becomes more likely. But they can fail as we seen in 2012 and 2022 and you end up with either neutral or another La Nina.
1 likes
RIP Kobe Bryant
Top

90 days CFS showing strong dual trade bursts, one in January and one in February. I wouldn't give any of these subsurface anomalies any weight until we get a true WWB.
0 likes
RIP Kobe Bryant
Top

Entering the final 2 weeks of the year and still no +PDO or +PMM.
0 likes
RIP Kobe Bryant
Top 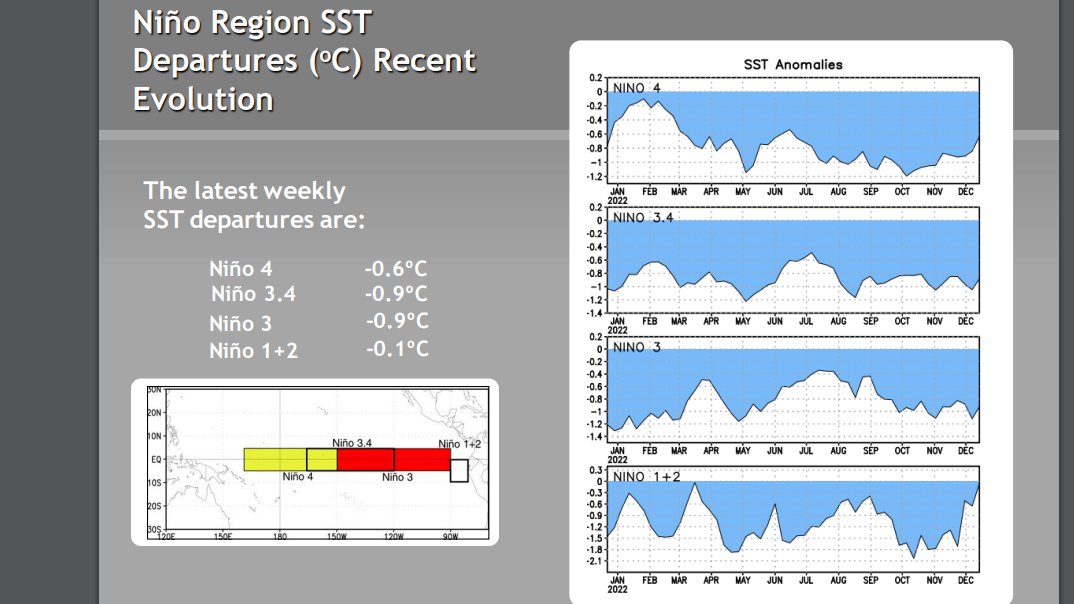 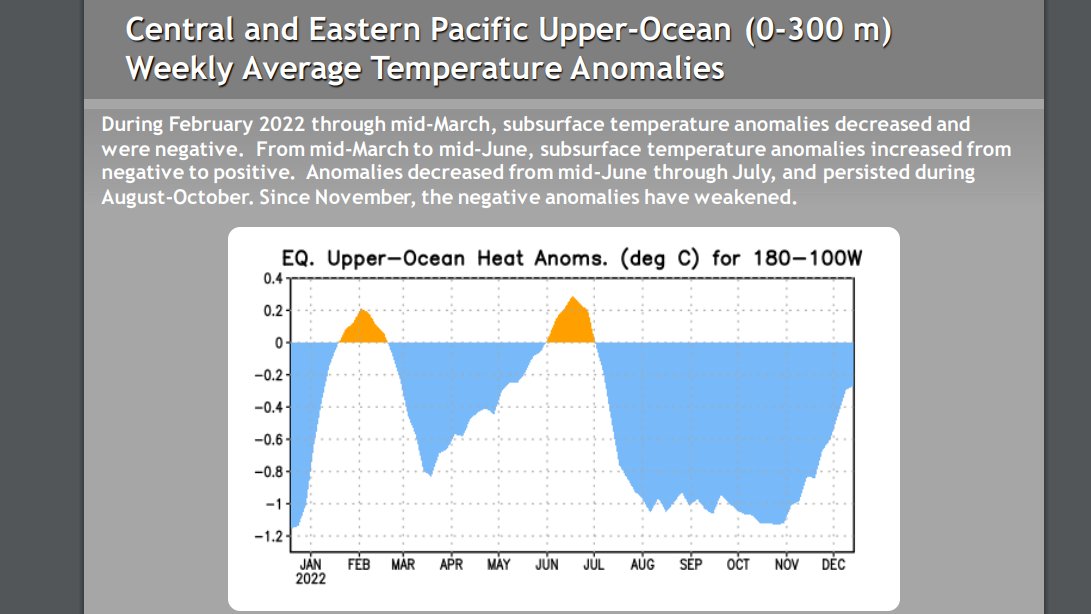 Westerly anomalies over the MC. I think for the first time this winter. Potentially see warmer subsurface anomalies that could eventually move east. Very strong trade burst over the dateline.

I'm sure some kind of Darwin low had to have skewed this, but nonetheless I've never seen daily readings in excess of +50. 30-day went from +4 to +17 in like three weeks..