The posts in this forum are NOT official forecasts and should not be used as such. They are just the opinion of the poster and may or may not be backed by sound meteorological data. They are NOT endorsed by any professional institution or STORM2K. For official information, please refer to products from the National Hurricane Center and National Weather Service.

Celia is a very weak tropical cyclone. Although some sporadic deep
convection has redeveloped within its small circulation, this
activity is not well organized near the center and continues to be
displaced westward by strong shear. The intensity estimate remains
at 25 kt in agreement with Dvorak estimates from TAFB and SAB,
however a scatterometer pass over the system and a nearby ship
report from a few hours ago suggests that this may be a generous
estimate.

The cyclone has begun to move a little faster toward the west and
the initial motion estimate is 270/6 kt. A faster motion toward the
west-southwest is anticipated for the next 48 hours or so while a
mid-level ridge builds to the north. Later in the forecast period,
Celia should turn to the west and west-northwest on the southwest
side of the ridge. The NHC track forecast is only slightly south of
the previous one and close to the solution of the latest corrected
consensus, HCCA.

Dynamical guidance indicates that strong easterly shear, associated
with an upper-level high near southeastern Mexico, should continue
to prevail over Celia for the next couple of days and prevent
intensification. Later in the forecast period, it is anticipated
that the shear will abate somewhat and allow the system to
strengthen. The official intensity forecast follows this reasoning
and is close to the latest LGEM guidance. It should be noted,
however, that the hostile dynamical environment in the short term
could cause Celia to at least temporarily lose its status as a
tropical cyclone.

Similar to yesterday, a widespread area of deep convection has
formed along and south of the Gulf of Tehuantepec, likely in
association with an ongoing gap wind event. There has also been a
few more clusters of deep convection developing just west of Celia's
estimated low-level center. Despite this activity, none of it is
especially well-organized and remains primarily down-shear of
Celia's vortex. However, it is enough coverage for now to keep Celia
as a classifiable tropical cyclone. The initial intensity remains 25
kt this advisory, favoring the lower SAB Dvorak classification given
the lackluster winds found with overnight scatterometer and a ship
report near the center.

Celia's motion continues off to the west, estimated at 265/7 kt. The
track guidance is in fairly good agreement that a west-southwest
motion will continue for the next 36 h as Celia is steered by a
deep-level ridge to the north supplemented by low-level northerly
flow from a gap wind event in the Gulf of Tehuantepec. Afterwards, a
turn to the west and west-northwest is anticipated as Celia becomes
positioned on the southwest side of the deep-layer ridging. The NHC
track forecast was nudged slightly south again from the prior one
following a southward adjustment in the latest consensus aids (HCCA,
TVCE).

Moderate to strong east-northeasterly vertical wind shear over the
next 24-36 hours still appears likely to keep Celia in check, and
the system is forecast to remain a depression during that time.
Afterwards, both the GFS- and ECMWF-based SHIPS guidance indicates
this shear should gradual subside as the system moves over 28-29 C
sea-surface temperatures. The majority of the intensity guidance
responds to this environment by showing intensification, and the
latest NHC intensity forecast was nudged upward just a bit after 36
hours. This forecast is a blend between the lower HCCA and higher
IVCN consensus aids, and is quite close to the most recent COAMPS-TC
(CTCI) forecast in 120 hours.

H. REMARKS...SYSTEM IS CHARACTERIZED BY CIRCULARLY-DEFINED CLOUD LINES
AND A LLCC NEAR A SMALL COLD OVC RESULTING IN A DT OF 2.0. MET AND
PT=1.5. FT IS BASED ON MET DUE TO IRREG/PULSING CONVECTION.

Celia appears to be holding its own this afternoon. While convection
has waned as it typically does approaching the diurnal minimum over
the ocean, there remain a few convective clusters located near the
depression's estimated low-level center. While scatterometer imagery
largely missed Celia's circulation to the west, it did show that
there were 25-30 kt northerly wind-retrievals in the gap wind flow
in the Gulf of Tehuantepec. These somewhat higher winds are not yet
related to Celia's wind field, but will likely play some role in
broadening the overall cyclonic envelope of the system. Satellite
estimates from SAB and TAFB remain unchanged from this morning, and
so the current intensity remains 25 kt.

The depression is losing some latitude while it has sped up some,
with its current motion estimated at 260/9 kt. A general west-
southwestward motion is expected to continue over the next day or so
because of northward deep-layer ridging in addition to the
northerly gap winds contributing to Celia's steering. Later this
week, a gradual rightward turn to the west-northwest is anticipated
due to the cyclone rounding the southwest side of the deep-layer
ridging. Once again the track guidance has shifted a bit south this
cycle, and the NHC track is also shifted in that direction, which
lies close to the multi-model consensus aids.

There are some interesting variations in the intensity guidance this
afternoon. For example, the GFS- and ECMWF-based SHIPS guidance
disagree on how quickly the northeasterly shear over Celia will
subside over the next several days. The ECMWF notably now shows the
shear dropping under 20 kt as soon as 18 hours from now and
remaining under that value for the remainder of the forecast period.
The GFS shear forecast is a good 5-10 kt higher for the next 48
hours. An inspection of the raw model fields, using simulated
IR-Brightness temperature, reveals that the GFS struggles to produce
deep convection near Celia over that time span, while the ECMWF
shows more widespread convection near Celia's center. This
convection may result in more upper-level outflow mitigating the
easterly shear over the cyclone. The ECMWF has also been handling
the convective structure with Celia better today, so some credence
is given towards its overall solution. The NHC intensity forecast
now shows a bit more intensification after 24 hours, and now makes
Celia a hurricane by 96 hours, which is faster than the previous
forecast. This is more in line with the IVCN consensus, but remains
lower than some of the more bullish guidance (HWRF, HMON,
ECMWF-SHIPS).

This has been a very interesting system to make studies about the ups and downs, not turning into a remanant low and then will intensify to a hurricane.
0 likes
Visit the Caribbean-Central America Weather Thread where you can find at first post web cams,radars
and observations from Caribbean basin members Click Here
Top

Wow, 18z HWRF has a monster cane almost cat 5 but the good thing is that it will stay well offshore from the Mexican coast. Only the waves will be high on the beaches of Acapulco, Manzanillo and Puerto Vallarta that are tourist cities.

H. REMARKS...LOOSELY DEFINED LOW-LVL CLOUD LINES VERY NEAR A SMALL AREA
OF COLD CONVECTION YIELDS A DT OF 1.5 USING SHEAR MATRIX. MET AND PT ARE
1.0. FT IS BASED ON MET DUE TO AN ILL DEFINED LLCC CAUSING UNCERTAINTY
IN DISTANCE, THUS UNCERTAINTY IN DT.

cycloneye wrote:Wow, 18z HWRF has a monster cane almost cat 5 but the good thing is that it will stay well offshore from the Mexican coast. Only the waves will be high on the beaches of Acapulco, Manzanillo and Puerto Vallarta that are tourist cities.

Those winds are 850mb

cycloneye wrote:Wow, 18z HWRF has a monster cane almost cat 5 but the good thing is that it will stay well offshore from the Mexican coast. Only the waves will be high on the beaches of Acapulco, Manzanillo and Puerto Vallarta that are tourist cities.

Those winds are 850mb 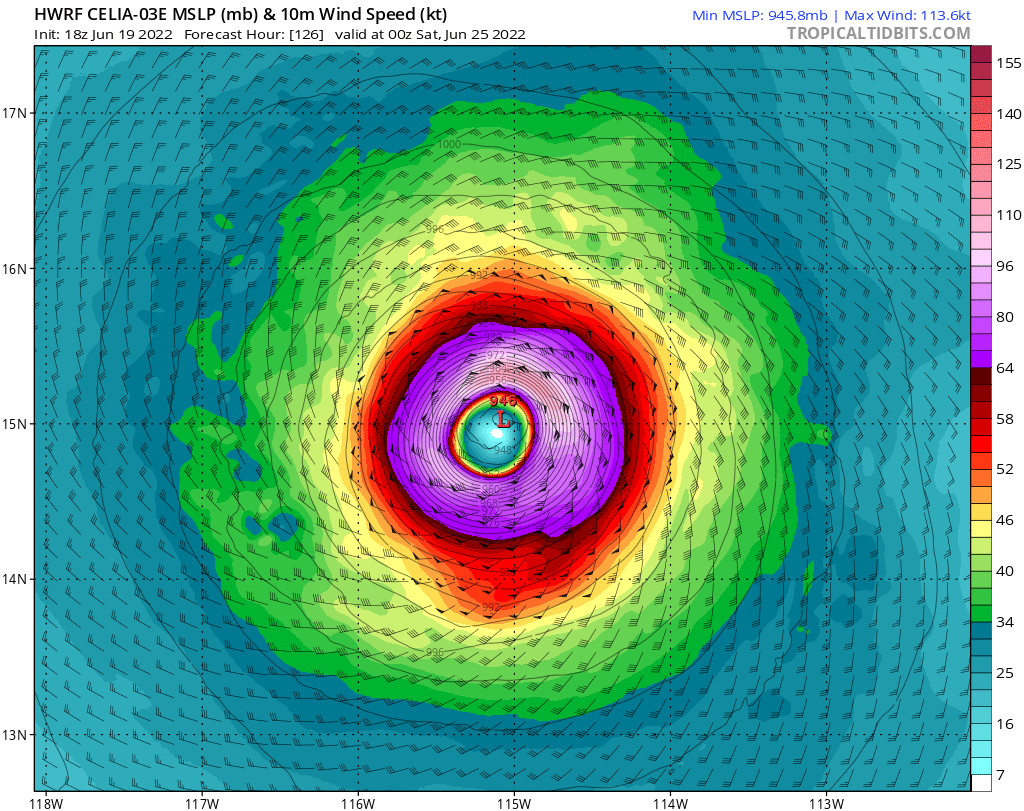 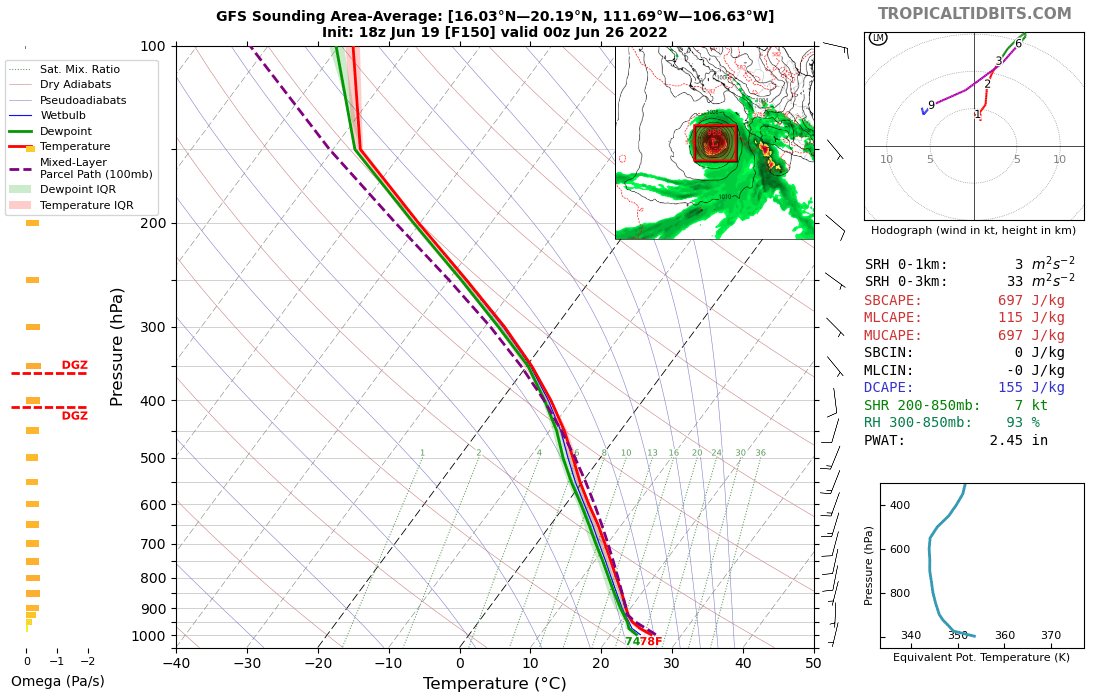 Some mid-level shear may be an issue but the modeled environment by the 18z GFS should have no problem supporting something decent.
0 likes
EPAC spreadsheet
Top

Would like to see a WNW track vs NW. Would help with MH chances. Something similar to Celia 2010.
0 likes
RIP Kobe Bryant
Top

Kingarabian wrote:Would like to see a WNW track vs NW. Would help with MH chances. Something similar to Celia 2010.

Imagine if it does Celia redux.

Celia is still struggling in a sheared environment. Some bursts of
convection continue to pulse near the center of the weak depression,
which remains exposed due to easterly shear. The initial
intensity remains at 25 kt, mainly because there have been no new
data to suggest otherwise.

The initial motion is south of due west, or 260/8 kt. The ongoing
Gulf of Tehuantepec gap wind event will likely cause the tropical
depression to continue west-southwestward for the next day or so.
Celia is then expected to be steered around the southwestern and
western edge of a ridge centered over the southeast United States
which should turn the tropical cyclone to the west-northwest beyond
the 36 h forecast. The model track guidance is tightly clustered,
and the new NHC forecast is very similar to the previous one with a
shift to the west at the end of the prediction period.

The depression is being affected by strong upper-level winds, which
are resulting in about 20 kt of shear. This shear is forecast to
slowly abate in the next day or so which will possibly allow for
some strengthening of Celia by the middle of the week. Celia could
even become a hurricane by the end of the forecast period as the
vertical wind shear decreases and other environmental factors remain
favorable. The official forecast is close to the previous advisory
and on the lower end of the model consensus.

Kingarabian wrote:Would like to see a WNW track vs NW. Would help with MH chances. Something similar to Celia 2010.

Imagine if it does Celia redux.

There have been a few small bursts of deep convection near the
estimated center of Celia, but easterly shear continues to prevent
significant organization of the thunderstorm activity. The current
intensity estimate remains at 25 kt in accordance with a Dvorak
estimate from SAB. Unfortunately a recent scatterometer pass,
which could have given additional information on the strength
of the system, missed the circulation of the cyclone.

The global models indicate that the persistent easterly shear over
Celia, associated with an upper-level anticyclone over southeastern
Mexico, should gradually diminish as the tropical cyclone moves
farther west. This should allow for some strengthening to commence
within the next day or so. The official forecast shows gradual
intensification beginning at 24 hours and is in good agreement with
the intensity model consensus, IVCN, for the 5-day forecast period.

Celia's center slipped a little south of the previous track but the
best estimate of initial motion is west-southwestward, or 255/8 kt.
A large zonally-oriented subtropical ridge is expected to prevail
to the north of Celia for the next several days. This should
induce a westward and then west-northwestward track over the
period. The official track forecast is similar to the model
consensus and not far from the previous NHC prediction.

H. REMARKS...SYSTEM IS CHARACTERIZED BY SPIRAL LOOSELY-DEFINED CLOUD
LINES AND A LLCC <1.25 DEG FM A SMALL COLD OVC RESULTING IN A DT OF
1.0. MET AND PT=1.0. FT IS BASED ON MET DUE TO IRREG/PULSING CONVECTION.

Still naked but the shear is supposed to begin to subside slowly by Tuesday.