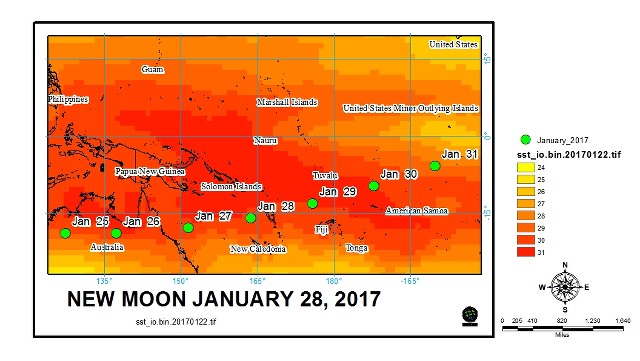 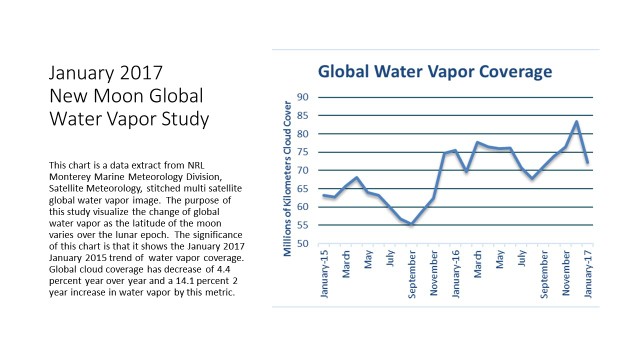 Missing satellite data for most of the phase. the problem cleared up today and was able to get a cloud count. There was a 4 percent drop in year over year water vapor and a 14.1 percent increase in water vapor since 2015.
Last edited by gigabite on Fri Feb 24, 2017 6:50 am, edited 1 time in total.
0 likes
Top 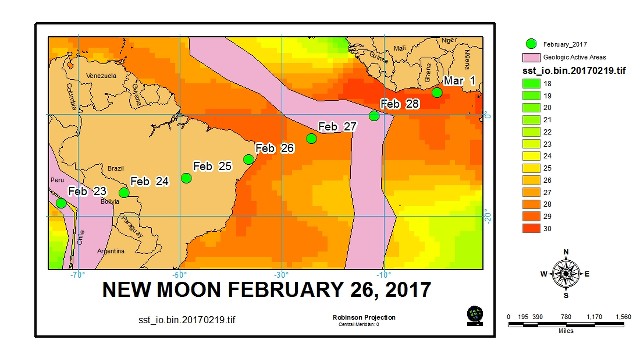 The February New Moon is crossing South America into the South Atlantic. This is the warmest water in the Atlantic and will be exposed to accelerated evaporation for four days. The sub lunar New Moon is over a highly fractured land mass before passing over the Atlantic. On the 28 the moon passes over a geologically active which historically pushes the global earthquake count up.
0 likes
Top 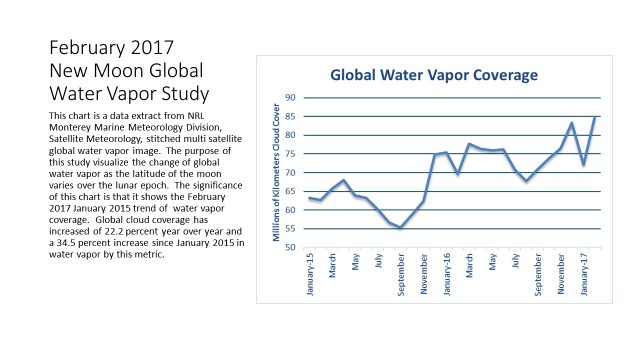 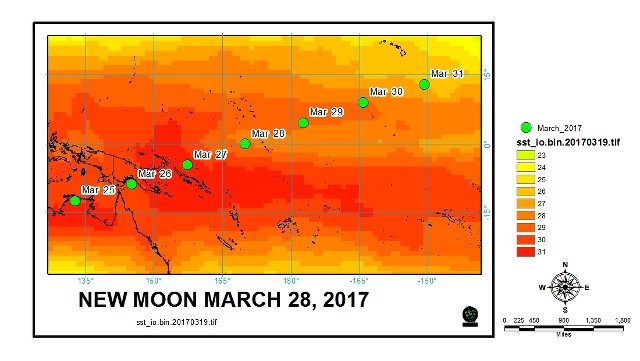 This is the phase path for March. Looks a lot like January. It is a little further north, but the shape of the sea surface temperature feature is similar. The new moon is approaching perigee. Last month the global earthquake count ticked up 43% it is still below the 400 quakes per phase, so there isn't a pattern yet. The number of earthquakes at or above magnitude 5 ticked up 25%. There is definitely progress on the U.S. drought figures as far as a relationship of aphelion New Moon Latitude and global water vapor goes. That relationship could be dampened by the percentage of dry land across the path the further the New Moons reach moves north.
0 likes
Top 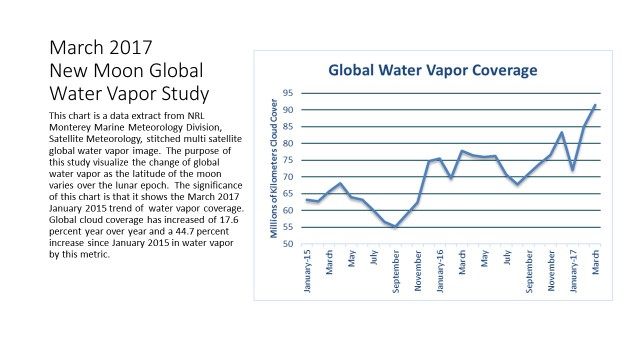 2017 global cloud cover is still increasing. It has increased almost by half since 2015. Being a 3.3% sample it is a narrow metric, and the age of the database in only about 3 years. The purpose is to show a relationship between the latitude on the midsummer new moon and global rainfall. That being an annual event a relevant database would take 30 to build.
0 likes
Top 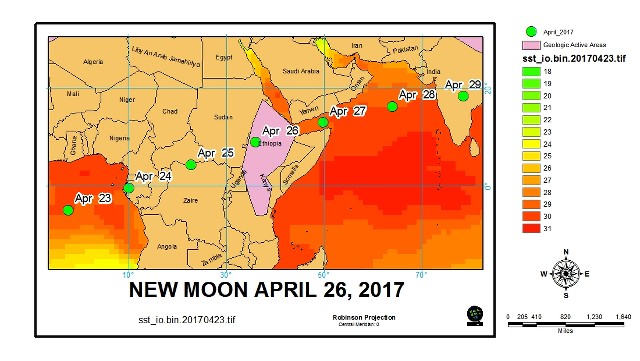 Back over Africa. I expect that global water vapor will dip. There is not much surface water to evaporate. The sublimation process is a process where kinetic energy of a surface water molecule changes the state of water from a liquid to a gas with out reaching the boiling point. I think that gravity has a role to play in evaporation. Just as acceleration due to gravity plays a role in the rate a rain drop falls, the force of gravitation between the sun moon complex is not evenly distributed across the surface of the earth especially at the New Moon. Whether there is a graviton or not isn't relevant. The simple fact that a small amount of energy is imparted to the water molecule to add to the energy in the evaporation can't be disputed and that extra energy has to accelerate the state change.

There is also this geologic active region. Two days after the last time the New Moon passed over it there was a pop in the global earthquake count for that day.
0 likes
Top 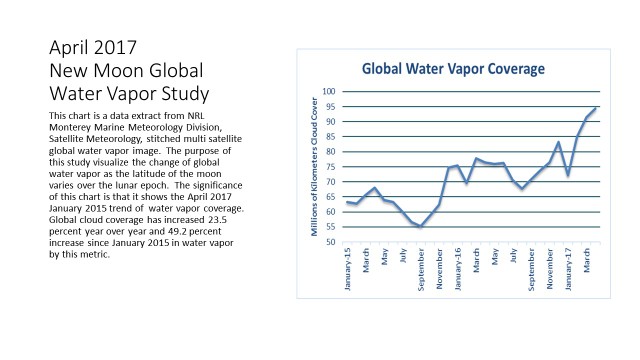 This is a surprise, another monthly increase of this data point. I was expecting the cloud density to falloff a bit from last month because the event was crossing the desert. The database is only a few years old. Statistically from the database it was a 50/50 chance. From here it is a 70% chance that the thickness of the water vapor image will fade until August.
0 likes
Top 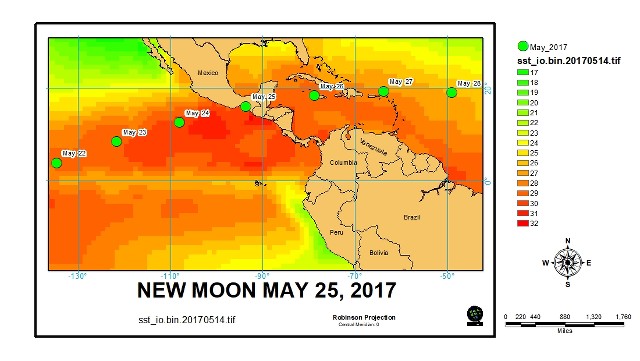 This should be interesting for the eastern Pacific. The lack of water vapor in the Caribbean limits the atmospheric tide.

Haiti and Puerto Rico always are geologically active areas. Earthquake frequency may pick up around the islands . Last month at the New Moon there were 24 earthquakes in the area none above magnitude 5.
0 likes
Top 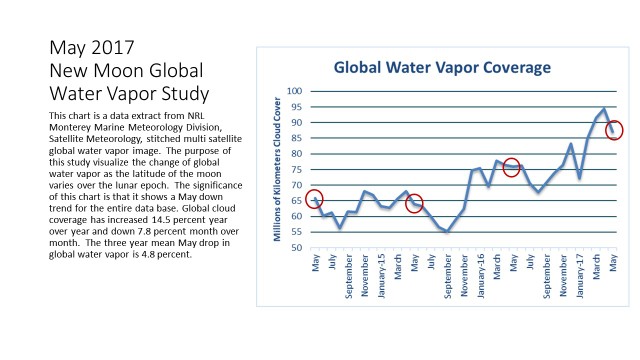 There seems to be a regular seasonal dip in global water vapor in May.
0 likes
Top 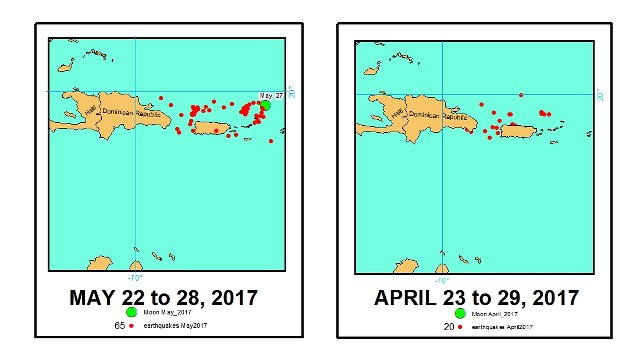 The image on the left is the May 2017 New Moon Pass. This pass crosses Puerto Rico the earthquake count for the 7 days of the phase was 65 the same area the month before was 20.
0 likes
Top 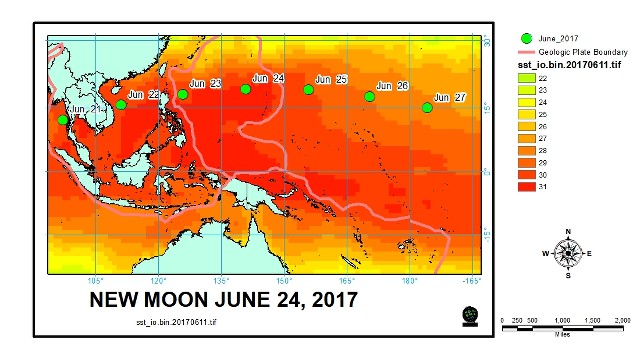 This looks like the top of the moons range for the year. Water is very warm, but there is no 32° C contour. There are quite a few plate boundary's to cross. The Earth Moon distance is similar to last month. The earths orbit is passing through a vector between Jupiter and Venus, that creates a setup that sometimes that beefs up the global earthquake frequency. The overall earthquake count during the New Moon Phase has been reduced since October 2015.
0 likes
Top 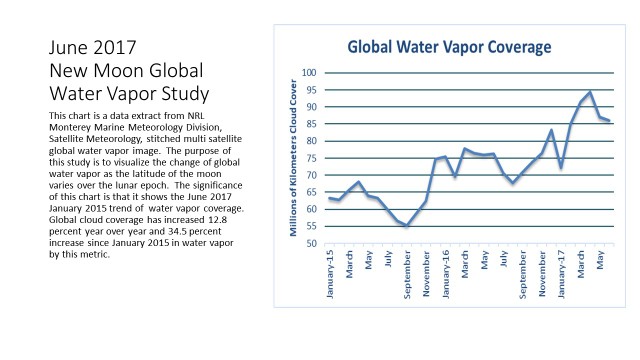 This is a plot of the latitude of the New Moon at aphelion. It looks like there is a few more years of the up swing in the moon's latitude.
0 likes
Top 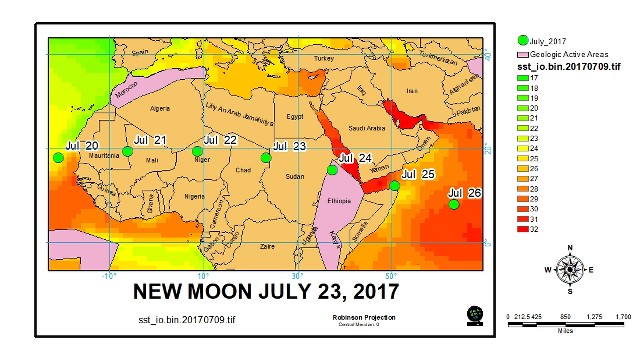 July's New Moon passes across the desert, and a geologically active region that sometimes demonstrates coincidental increase in global earthquakes. It is a day after perigee. The earth/moon distance at the New Moon is beginning to increase for the year.
0 likes
Top 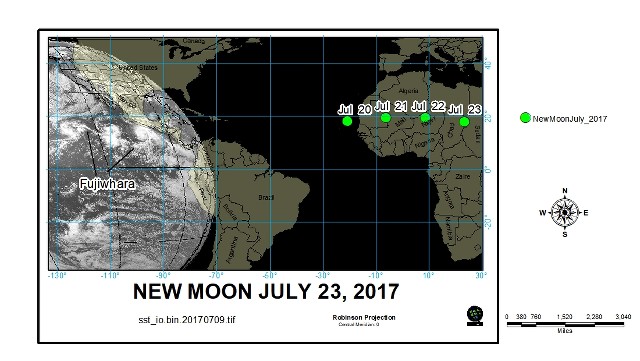 This is the 23 July 2017 18:00 visable image georeferenced to the Moon Path Frame. There seems to be an interaction.
0 likes
Top 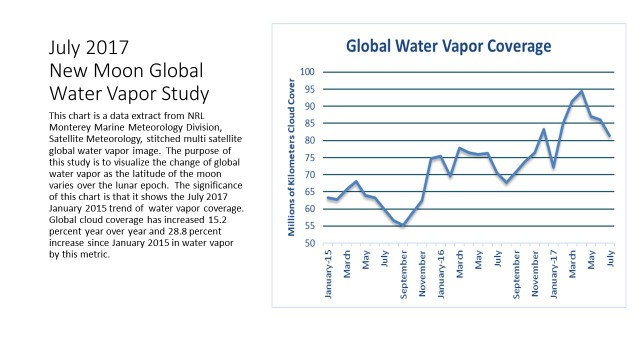 This month the amount of water vapor at the New Moon dropped precipitously (excuse the pun) the rate of change from April 2017 to July 2017 is 60% greater than a similar drop in 2015. I'll attribute that fact to the pass over the desert.
0 likes
Top 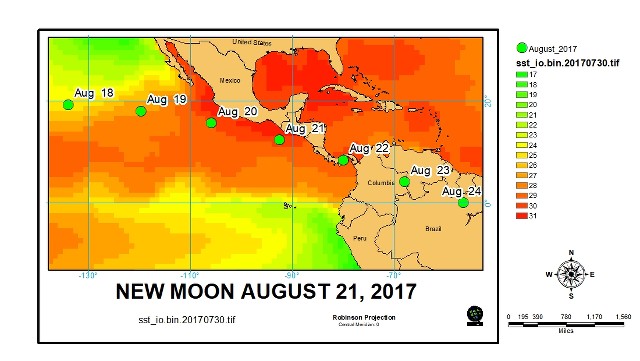 This is the New Moon Path for August 2017. The local waters are a little warmer than last month. The range of temperatures are a degree cooler than last month, but the pass was over the desert. There is lots of geologic active areas in this pass. The earthquake activity around Puerto Rico will probably tick up a bit.
0 likes
Top 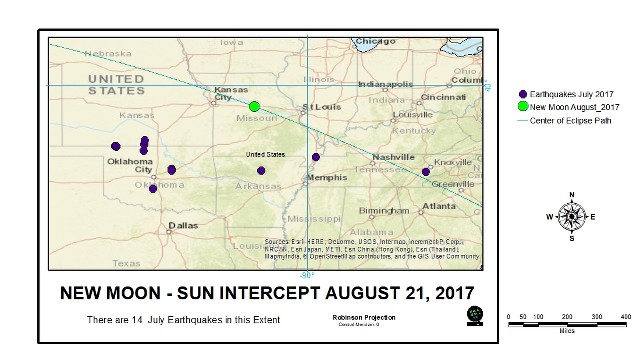 This is a approximate position of the Sun Moon Ground intercept line at the alignment near the time of the New Moon. The earthquake count may pick in this map extent due to the pass.
0 likes
Top 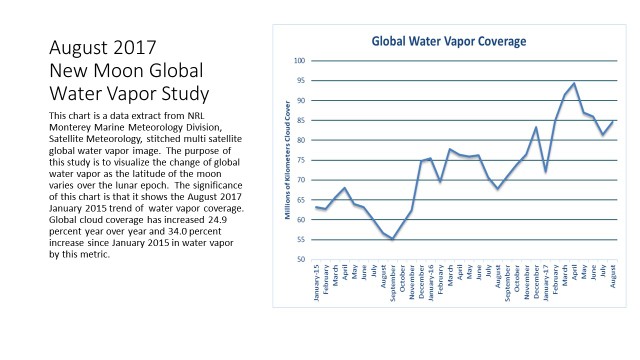 This is the plot of global water vapor for August 2017. The square miles of cloud cover ticked up year over year. There seems to be a pattern emerging of a progression in the month of the annual uptick, in 2015 the up tick was in October, 2016 it was September, 2017 it was August. 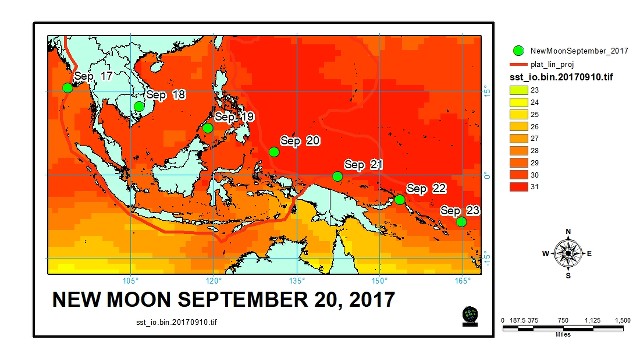 This pass is almost the same as June 2017. It is further South into a warmer range of water. It is a geologically active area. The earth moon distance does not suggest any extra global earthquakes. The New Moon crossing the equator could push the global earthquake count.
0 likes
Top
Post Reply
151 posts