Looks like some dry air might have punched into the northern eyewall again. Intensity might have leveled off or even weakened slightly. Sergio is definitely shaping up to be one of those systems who experiences several intensity fluxes. I think he might evolve into one of those storms who get caught up in ERCs and has trouble completing. Not saying he's going through an ERC right now though, no signs of that yet, I'm just making a guess as to Sergio's future.
2 likes
Solar Aquarian
Lunar Cancerian 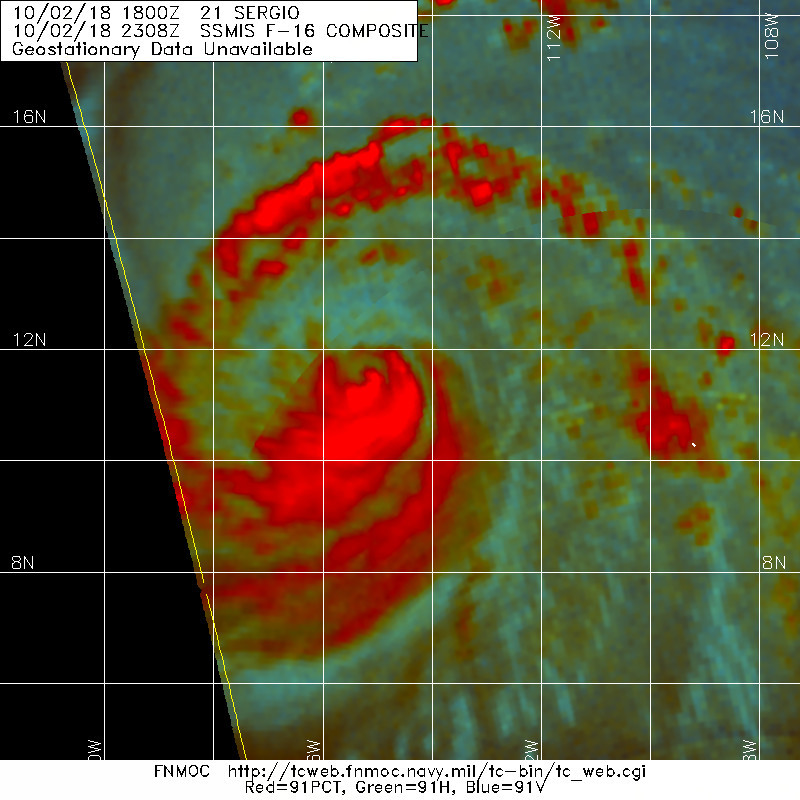 Looks like some shear from the NNE near and just below anvil level. It's not too hard to make out on GOES-17 band 9 (6.9 um mid-level water vapor).
0 likes
Wayward meteorology student on a journey back to the promised land.

Sergio might be making that run to Cat 4 now. Microwave showed a complete eyewall that was looking healthy and strong, the eye is clearing on satellite, and the CI# is now 6.3 with a center temp of +5.5C on ADT.
0 likes
Solar Aquarian
Lunar Cancerian

Looks to me like a secondary tropical cyclone has developed on the southwest side of Sergio in the outer bands.
3 likes
This post is not an official forecast and should not be used as such. It is just the opinion of MississippiWx and may or may not be backed by sound meteorological data. It is not endorsed by any professional institution including storm2k.org. For Official Information please refer to the NHC and NWS products.
Top 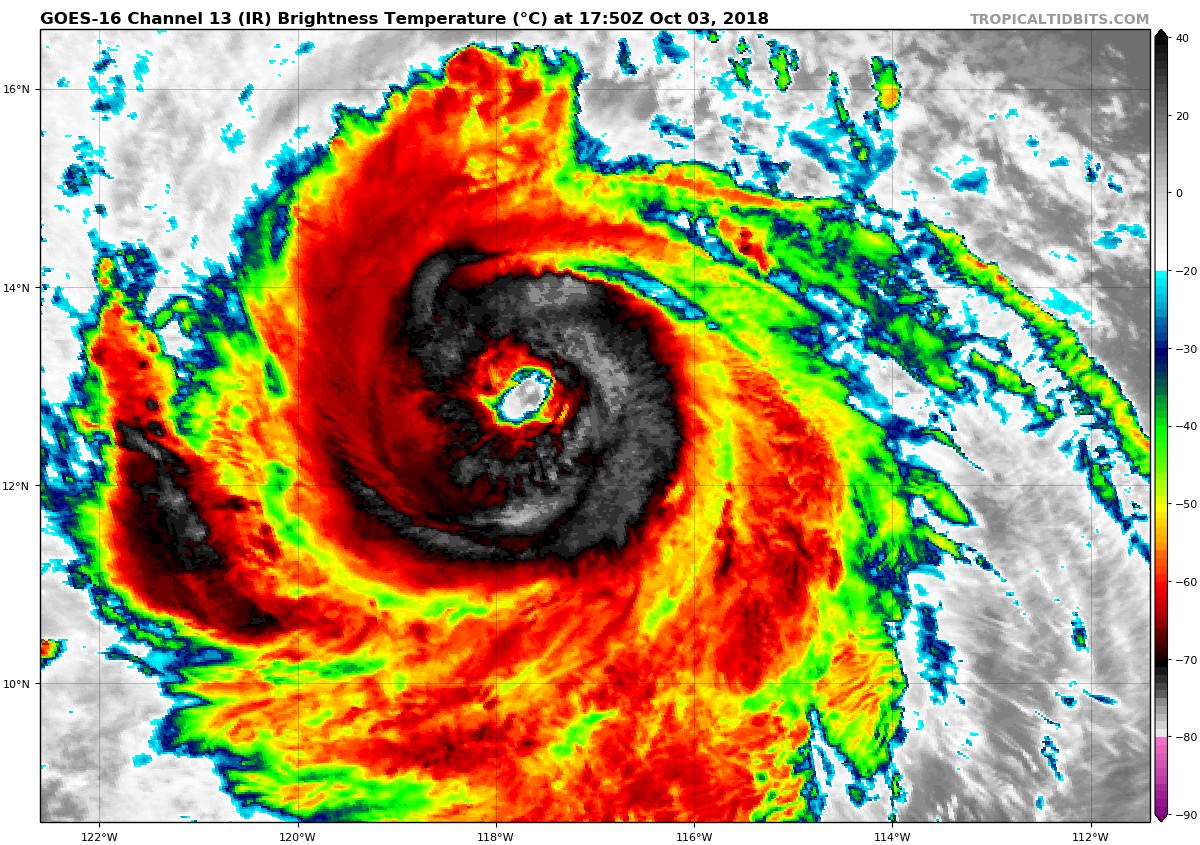 2 likes
The above post and any post by Ntxw is NOT an official forecast and should not be used as such. It is just the opinion of the poster and may or may not be backed by sound meteorological data. It is NOT endorsed by any professional institution including Storm2k. For official information, please refer to NWS products.

Sergio's satellite presentation continues to look impressive this
afternoon. Several mesovortices can be identified rotating within
the eye. However, the eye is somewhat obscured by upper-level
clouds and the eyewall edge is not clearly defined. Based on a
blend of subjective Dvorak estimates from TAFB and SAB, the advisory
intensity estimate is held at 110 kt, which is the same as in the
previous advisory. Sergio should remain in quite favorable
atmospheric and oceanic conditions for the next day or two, and
additional strengthening is expected through Thursday. By
Friday, Sergio will be moving over slightly cooler sea-surface
temperatures and through a drier mid-level air mass, which should
initiate gradual weakening.

Sergio is currently heading toward the northwest, or 305/8 kt. By
Friday and Saturday, the storm is forecast to slow and turn
west-northwestward to westward while a mid-level ridge builds to the
north and northwest of the hurricane. The official track forecast
lies close to the equally weighted dynamical model consensus, TVCN.

It is of interest to note that a small disturbance currently
located a few hundred n mi to the west-southwest of Sergio is
expected to be drawn into the larger circulation of the hurricane
overnight.

Next advisory this should be the 9th Cat 4+ of the season. Very low shear ahead for a couple of days to peak.

5 likes
The above post and any post by Ntxw is NOT an official forecast and should not be used as such. It is just the opinion of the poster and may or may not be backed by sound meteorological data. It is NOT endorsed by any professional institution including Storm2k. For official information, please refer to NWS products.

BEST track up to 115kts
0 likes
The above post and any post by Ntxw is NOT an official forecast and should not be used as such. It is just the opinion of the poster and may or may not be backed by sound meteorological data. It is NOT endorsed by any professional institution including Storm2k. For official information, please refer to NWS products.

We have Sergio as Cat 4.

Sergio is quite the sight tonight over the eastern Pacific with a
large central dense overcast and mesovortices observed within the
well-defined eye. Subjective estimates from TAFB and SAB both
support a slightly higher initial wind speed of 115 kt on this
advisory, which is a good compromise between lower microwave
estimates but higher ADT values. Notably, Sergio is the record most
8th category 4 hurricane of the 2018 eastern Pacific season-
breaking the old record of 7 set in 2015. Reliable records in the
eastern Pacific for major hurricanes go back to 1971.

Further strengthening is possible during the next day or so while
the shear is forecast to remain low and the water is quite warm.
After that time, a combination of cooling waters and higher shear
should generally cause Sergio to weaken. This will probably be an
unsteady process, however, since eyewall cycles are also likely over
the next few days. Overall, the hurricane should be on a weakening
trend, and that is the NHC forecast, very similar to the previous
one, and a bit higher than the model consensus.

Sergio is moving northwest or 315/8. This motion should gradually
bend toward the west over the next day or two as the steering flow
changes from a ridge near Mexico to a building ridge to the
northwest of the hurricane. Sergio could turn to the northwest
early next week as the hurricane comes under the influence of
a deepening trough over the far eastern Pacific and southwestern
United States. The model guidance is in excellent agreement during
the next few days, and no significant changes were required to the
previous forecast. ERC? There's a moat-like feature on the NE sector of Sergio on AVN IR.
1 likes
The posts in this forum are NOT official forecast and should not be used as such. They are just the opinion of the poster and may or may not be backed by sound meteorological data. They are NOT endorsed by any professional institution or storm2k.org. For official information, please refer to RSMC, NHC and NWS products.
Top

Sergio's intensity is estimated to have increased just a little
more this morning, and it remains a powerful category 4 hurricane.
Subjective Dvorak estimates are T6.5/127 kt from TAFB and T6.0/115
kt from SAB, and the initial intensity is raised to 120 kt, which
is a blend of these numbers and very close to the latest objective
ADT estimate. Sergio's maximum winds are expected to change little
over the next 12-24 hours, and the hurricane's intensity could very
well be modulated by difficult-to-forecast internal processes such
as eyewall replacement cycles. After 48 hours, an increase in
shear and gradually cooling sea surface temperatures should result
in some weakening, especially when Sergio moves more slowly at the
end of the forecast period and possibly upwells some cooler water
from below. The updated NHC intensity forecast is nudged downward
during the first 48 hours to follow the latest consensus aids, but
no changes were made to the previous forecast beyond 48 hours.

The hurricane's initial motion is northwestward, or 320/7 kt, with
Sergio located along the southwestern periphery of a mid-level
ridge extending westward from Mexico. This ridge is expected to
build westward and connect to another mid-level ridge located near
the central Pacific Ocean, forcing Sergio to turn westward, or even
south of due west, between 36-72 hours. By days 4 and 5, a large
trough near the west coast of the United States should have greater
influence, causing Sergio to slow down and turn northward by the
end of the forecast period. The track guidance is tightly
clustered for much of the forecast period, although a notable
southward shift among the guidance, especially from the ECMWF,
required a bit of a southward shift in the official forecast as
well.

Sergio remains a strong hurricane this morning, with subjective
Dvorak estimates range from 5.5 (102 kt) to 6.5 (127 kt). While
some slightly drier air has been ingested into the eyewall, cloud
top temperatures have cooled recently and Sergio appears poised to
once again close off this dry air channel. Based on these data, the
initial intensity is held at 120 kt. The intensity forecast is
mostly a continuation of the previous advisory, but is slightly
lower after 24 hours to reflect a blend of HCCA and other consensus
aids. Vertical wind shear from GFS/SHIPS is forecast to remain at or
below approximately 10 kt through 48 hours before increasing to
above 15 kt by Saturday. The primary limiter on Sergio's intensity
appears to be SSTs which will drop off gradually, especially by the
end of the forecast.

Sergio is continuing to move northwestward around the mid-level
ridge which extends into the Pacific off of Mexico. The initial
motion is 320/8 kt. Objective track guidance is in fairly good
agreement on a gradual turn toward the west tonight and Friday in
response to a second ridge which builds in from the west. Guidance
remains in decent agreement on Sergio then turning back
northeastward by the end of the forecast period as this ridge lifts
northward and a highly-amplified mid-level trough digs into western
North America. The official track forecast is very similar to the
previous advisory through day 4 with a small shift eastward
thereafter to reflect a slightly earlier northeast turn in the
guidance. This track philosophy is supported by essentially all of
the ECMWF/GFS ensemble members as well.

Just about wrapped up that ERC

Sergio remains an impressive hurricane. Although the cloud pattern
is still symmetric and well organized, the eye has become ragged and
cloud filled at times. The current satellite intensity estimates
range from 102 to 127 kt, and the initial intensity is set to 115 kt
based on a blend of these data. The environmental conditions along
Sergio's future path are expected to gradually become less favorable
during the next several days, with decreasing mid-level humidities,
cooler SSTs, and a slight increase in wind shear. In response, all
of the models show a gradual weakening trend through the period, and
the NHC forecast does as well. This forecast lies near the intensity
consensus aids and is largely an update of the previous one.

The hurricane is still moving to the northwest at 8 kt. A gradual
turn to the left, or west, is expected during the next couple of
days as a mid-level ridge builds to the north-northwest of Sergio.
Late this weekend, a decrease in forward speed is expected as the
ridge retreats in response to a large trough over the southwestern
United States. This change in the steering pattern should cause the
cyclone to turn northeastward by the end of the forecast period. The
only notable change in the track forecast is a sharper northward and
northeastward turn at days 4 and 5, to come in better agreement with
the latest consensus aids.